Last night a friend texted me that she had seriously planned to drive to Indianapolis to be with us while JJ has his surgery. It would have been a 6-7 hour trip for her. She decided not to come only because she is sick. People are being very considerate about not coming around JJ if they are sick. I was utterly amazed that she would be willing to drive all that way. She said, “You are worth it.” Another friend told me today that she and her husband had discussed coming to be with us–a trip of 1100 miles–but they couldn’t figure out how to do it. EJ said one of his sisters also considered coming to be with us. I am constantly astounded by the love of our friends. We have the most awesomely caring friends EVER.

We were tired yesterday after our long drive, so last night we ordered pizza to be delivered to our hotel room. That was fun, and the pizza was tasty. I looked out our window and saw the delivery guy drive up to the hotel. I also noticed that we weren’t the only guests ordering pizza. Here are some pictures from last night. Click on them to make them larger. 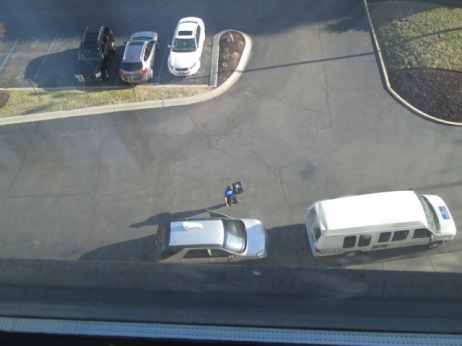 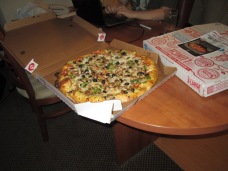 Yummy pizza for supper… (and breakfast) 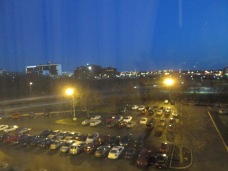 The City at night. A view from our window.

EJ was restless and up and down and up and down all night, first sleeping in the bed and then in the recliner and then back in the bed. I thought that his back was hurting him and he couldn’t get comfortable, but learned this morning that he hadn’t been feeling well. He said he felt swimmy-headed, feverish, and nauseous all night…and all day today.

When I heard how sick EJ was feeling, I felt a sense of panic. JJ MUST stay healthy for his surgery, and EJ MUST stay healthy because he is the only one who can get us to our destinations. I can get lost in a parking lot and lost in a gas station (and a theater, and a hospital, and….) so he CANNOT get sick. EJ stopped and bought some pepto-bismol tablets in the hotel gift shop as we left for the consultation with the surgeon this morning.

I had everything planned and packed for our trip to Indianapolis. I had figured that we’d mostly just be eating breakfast in our hotel suite so I packed several boxes of cereal. However, the trunk of the rental car wasn’t all that big so EJ left the picnic basket at home, and also a bag with some of the cereal. I thought we still had cereal in another bag so I was planning on us having cereal for breakfast this morning. Then I discovered that the bag that was brought with us only had snack crackers and a box of cereal that only EJ likes (and which he was too sick to eat this morning). So JJ and I had raisin toast and cold pizza for breakfast. Bleagh. At least I had coffee.

We arrived early at the Cancer Center. It was really quite beautiful. There were large bamboo trees along some of the hallways so that it looked as if the walls were living. One wall of bamboo divided a cafeteria area from the rest of the hall. The doctor’s offices on each floor overlooked an interior balcony so we could look over the half wall and see all the other floors all the way up and all the way down. I snuck one picture of JJ with the balcony behind him (which didn’t turn out all that well) but I felt kind of weird taking photos at a hospital as if I was a tourist. I found a couple of pictures of the hospital lobby on the Internet.

A wall of bamboo is at the end of the hall. 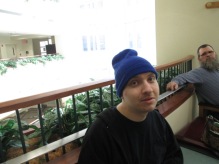 In the waiting room. Behind JJ we could see all the floors above and below us.

We had quite a long wait at the surgeon’s office. I felt very sorry for EJ because he was feeling so poorly. JJ and I kept each other entertained by cracking jokes that made us laugh.

Once we got back into the exam room, we found the staff to be delightful. JJ told the nurse about his pathetic breakfast, and she said, “That’s terrible! Would you like to come home with me? You could play X-box with my son and have GOOD food to eat. Or tell me where you are staying and I will bring GOOD food to your hotel room.” We laughed. JJ also her that he tends to be a “storm magnet” that attracts severe weather and tornadoes. She moaned, “Oh, great! There is supposed to be severe weather for the remainder this week.” “Yup,” we said, “It’s probably JJ’s fault.”

The doctor also was good–very warm and compassionate. He explained why he felt this surgery was necessary for JJ. He said that when testicular cancer patients have chemo–the very treatment JJ had–there are two results. One is that the cancer is completely gone so surgery is not needed. The other result is that there is an indication that there is still “something” in his body. In 20% of patients, the “something” is merely dead cancer cells. In 80% of the patients, the “something” is dangerous cancer cells. There is no way of telling which it is, so they prefer to remove the lymph node. He said that in some patients, a kidney (and/or other stuff) have to be removed. JJ doesn’t need that. There is a slight risk that the surgery could affect a certain nerve and cause a problem, but the risk is very slight. The surgeon expects JJ to be in surgery for only two hours and that the procedure will have no complications. Because of the way the surgeon explained everything, I didn’t have any problem with feeling faint.

JJ will be the surgeon’s first patient tomorrow. We have to be at the hospital at 5:30 a.m. so we will wake up at about 3 a.m. The surgeon said that JJ will probably head into surgery at around 7:30 a.m. He will be on a liquid diet for a day and then will be able to eat solid food. The surgeon said that because JJ is young and strong, he will recover quickly. He will probably be discharged from the hospital on Friday morning. Depending on our well JJ is feeling, we will probably leave for home on Saturday or Sunday.

After we left the Cancer Center, EJ drove us to a nearby grocery store. I bought saltines, ginger ale, and pepto bismol for EJ and milk and cereal for us, and a couple other things. Then we headed back to the hotel and EJ went to bed. He hopes that if he sleeps today he will start feeling better. (He doesn’t think it’s caused by stress.) I called my friend and then JJ fell asleep on the couch and I took a small nap in the recliner. We were all tired from our disturbed night.

I saw in the info book the hotel provided that there is a Kosher Deli nearby. I really wanted to order EJ chicken soup for supper, but I saw that they require a $100 minimum order for deliveries so THAT won’t happen. I would go to the deli to pick up the food except I would get lost forever. EJ doesn’t feel well enough to go himself. The other restaurants in the area that will delivery will deliver provide mostly pizza and subs.  Or since we had pizza for breakfast, we could just have cereal for supper.

2 Comments on “Monday in Indy”