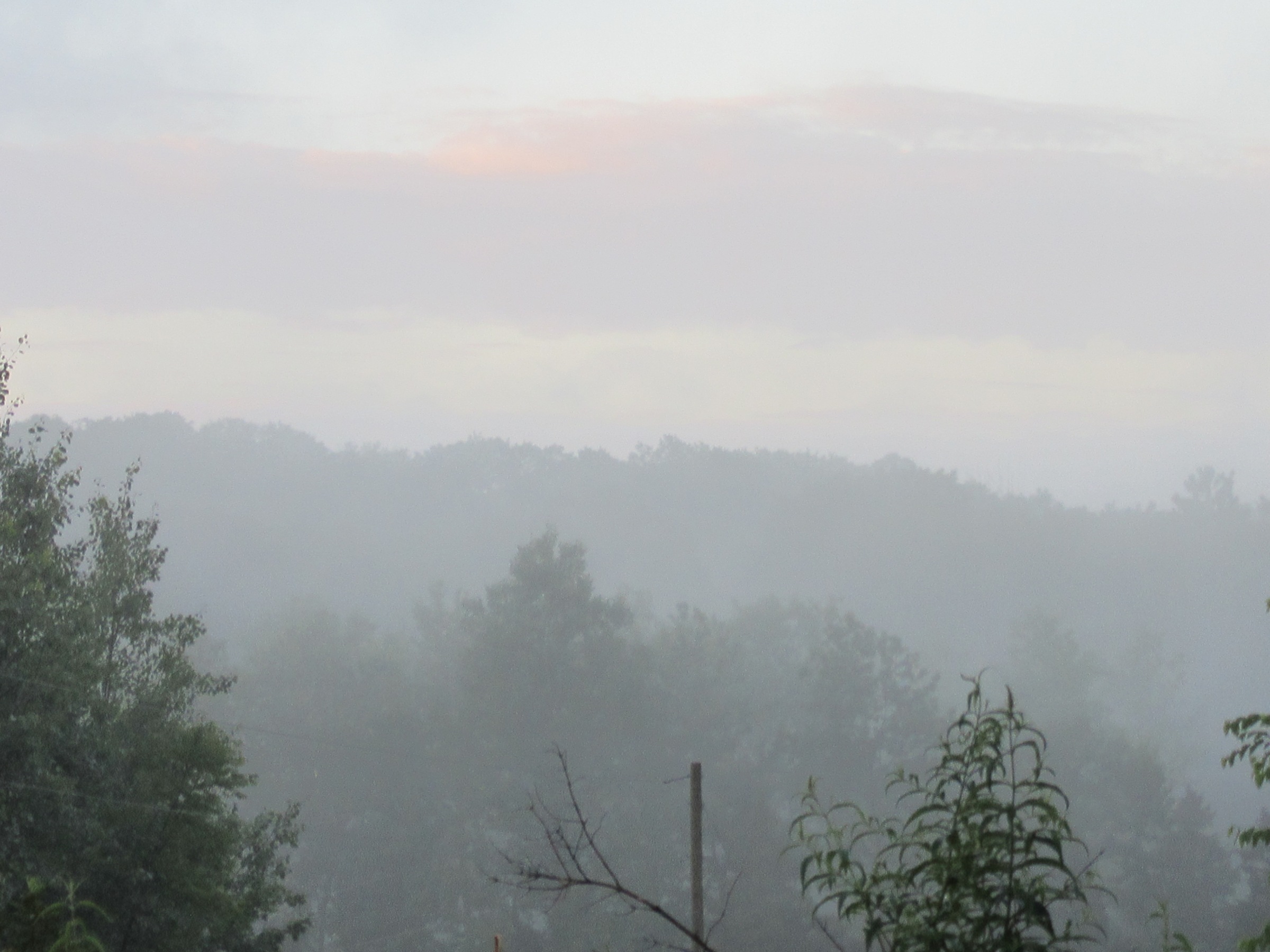 The suburban needed some work done on it so we dropped it off at the repair shop last night after EJ had eaten a quick supper. The repairs are going to cost a lot (ouch), but thankfully we have just enough money to pay for them.

With one less vehicle and two guys who had to get to work this morning, I had to do some chauffeuring. I went to work with EJ in the Buggy (Xterra) and then drove home, arriving about 20 minutes before JJ had to leave for work. At first I thought I’d have to drive JJ to work as well because EJ usually gets out of work at 4:30, and I wouldn’t have had time to take JJ home and pick EJ up. Then I realized that this is EJ’s busy time of month and he would be working late so JJ would be home well before I had to go get EJ.

I wasn’t exactly looking forward to all this running around, but the scenery is so beautiful around here that it really is a delight to go anywhere. This morning started off foggy. Before we left, I took a photo of the foggy landscape of our Enchanted Forest, which is pictured above.

When I went to pick up EJ, the roads in the city were clogged with traffic–not only from people driving home after work, but also with all the tourists in the area. However, I find busy traffic easier to drive through up here in Northern Michigan than downstate, so it was no problem. Even when I’m stuck waiting through three green lights, it’s not a chore because there’s so much beautiful scenery to enjoy. I couldn’t take photos when I was driving, but I made EJ drive home so I could take photos of the Bay. The water changes with the weather; today it was green with whitecaps.

Before I went to pick up EJ, I went out to the coop to gather eggs. I found a tiny egg among the regular ones. Tiny eggs like these have several different names, but my favorite is “fairy eggs.” Usually they are yokeless.

The repairs on the suburban are not finished so tomorrow will be sort of a repeat of today. I will have to take EJ to work tomorrow morning, but instead of JJ going to work, I will be taking him to his oncology appointment in the afternoon. We never look forward to JJ’s oncology appointments, but we are especially dreading this one. I don’t know how we would endure–emotionally or financially–if his cancer returns. I’m praying so much that we will have good news, but I’m fearing that it won’t be. I’m bracing for possible bad news. It’s no use saying, “Don’t worry.” Of course we are going to worry about our son, our only child.

For most of my life I prayed that God would increase my faith, no matter where it took me or what it cost me. But after all the difficulties we’ve experienced, I’ve mostly just been praying that God would let us lie down in grassy pastures, that He would lead us by quiet waters, and that He would restore us. I’ve also prayed Ps. 90:15:

Let our joy last as long as the time you made us suffer,
for as many years as we experienced trouble.

← The “Bird That Cries With Grief”
Oncology Results →