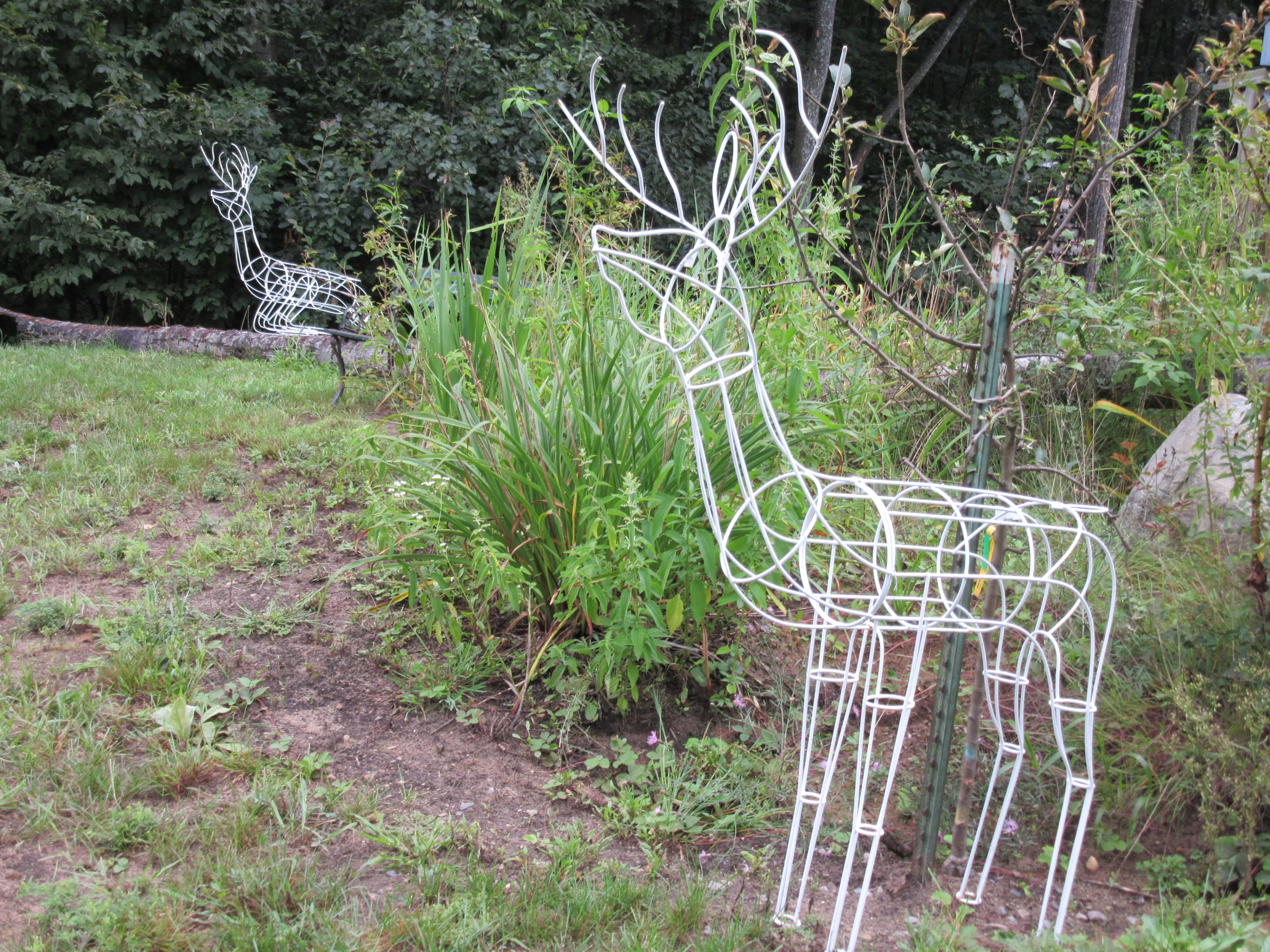 Yesterday was very humid–I think it might have been the hottest day this summer. A storm moved in about 8 p.m. It was a little early, but I went out to put the poultry to bed before the storm got too bad. The chickens all went into the coop themselves when it began to storm so all I had to do was shut their little door. The ducks stayed out in the rain until I herded them into the coop. They might not mind the rain, but I didn’t want to be out in pouring rain.

The storm cooled everything down so that the temperatures today were in the 60s. It felt more like late September than late August! That doesn’t bother me–I prefer jeans and sweatshirt weather. It rained a little bit at around 10 a.m., but other than that we just had dark dramatic clouds lumbering across the sky through much of the day. They made the day dimmer than what we experienced during the eclipse.

This morning I went outside to work on the injured wire deer. With it laying on the table, I felt a bit like Dr. Frankenstein putting together his monster.  I successfully put the deer together although I had some pieces left over.  I think they were merely part of a stand to hold the leaping deer up, but I suspect some of the pieces were missing because I couldn’t make sense of any of them. None of them logically fit together. Oh, well.

After I got the deer fixed up, I released it into the wild. It happily leaped off into the Enchanted Forest. I felt very satisfied.

Putting together the pieces of the deer this morning made me feel a bit like Dr. Frankenstein. But then this afternoon I saw Frankenstein’s monster for real. It scared me so much that I trembled and I almost had a heart attack.

You know how in the scary movies, someone hears a strange noise or sees something weird and he/she walks toward it to investigate? And you, the watcher, knowing that it’s a terrible monster or serial killer lurking in the shadows, want to shout a warning: “Don’t! Danger! Run!”

For weeks I’ve been seeing a hole in the ground not far from the gate to the duck pen. I’ve been wondering what lived in it. A snake? A spider? A cicada? An unusual insect? Nothing? Whatever it was–if it was anything–it had to be relatively small because the hole was just the diameter of my finger. Nothing to worry about.

This afternoon when I went out to gather eggs and refill water buckets, I noticed the hole again and my curiosity overcame me.

Someone should have been there to warn: “Don’t! Danger! Run!”

I had the garden hose in my hand and, standing a couple feet away just to be safe, I directed the stream of water at the hole. The hole filled and crumbled into a bigger hole, and water began to geyser up into the air.

Suddenly, up popped a body…a very large ugly body. It was the largest, ugliest spider I had ever seen. It made the large wolf spiders I’ve seen look small and cute. (Not really–wolf spiders will never be cute.) I just about had heart failure. I began to tremble and felt like fainting, vomiting, and pooping my pants all at the same time. I ran into the house for the spider spray–and my camera.

As I walked through the garage, I was filled with indecision: The spider was outside, not in the house. Maybe I shouldn’t spray it. What if an animal I liked–wild or domesticated–ate its toxic dead body and died? I left the bottle of spray in the garage and went outside.

When the spider had popped out of the hole, it had landed on its back. When I got back outside, I saw it turn itself over. It was ALIIIIIVE!

It began to crawl towards the house. That does it! I took a photo of it and then ran into the garage and grabbed the bottle of spray.

When I got back outside, it was gone! I fearfully looked around, but it had disappeared! Vanished! The only thing worse than a spider I see is one that I know is there but can’t find!

Enchanted Forests always have wonderful, magical things it them. But they also always have evil giant spiders in them. Always.

When I told my horror story to my guys, they laughed at me. They are no comfort–no comfort at all. I texted my friend, who recommended that we burn our house down and start over from scratch. She totally gets it.

I’m trying to find the identity of the spider so I know just how much more terrified of it to be. Is it going to shoot venom at me? Or wrap me in its web and hang me from the trees? (Where is Bilbo’s “sting” when I need it?). Will it latch onto my head and suck out my brains?

I’m asking a bug identification group at Facebook if they know what it is. I’ll post what it is when I find out. Some guesses are a Burrowing Wolf Spider or a Carolina Wolf Spider. I read that the Carolina Wolf Spider is “the largest ‘wolf spider’ in North America. Females reach 22-35 millimeters in body length. Their leg span is greater still. This spider may hunt actively at night, or wait in ambush at the mouth of its burrow, where it hides during the day. Adult males may wander indoors during mating season.”

About wolf spiders, in general, I read:

Wolf spiders or lycosids are fairly common predators that feed on large insects and other spiders. They are not known to be aggressive, but they will bite in self-defense if handled roughly. Their venom is not particularly dangerous.

Most lycosids do not construct snares (webs) but hunt their prey on the move like wolves do (hence their common name). Some live in burrows in the ground and ambush their prey as it crawls past the opening of the burrow. Wolf spiders are usually a shock to people who are unfamiliar with them because of their large size and some have mistaken them for an escaped pet tarantula. Others are concerned that they might be the brown recluse spider which is not known to occur in Michigan. Most wolf spiders hunt at night but occasionally they can be found during the day. Female wolf spiders carry their young on their backs for a considerable time after they hatch. Wolf spiders normally enter the house near ground level and are normally encountered in basements, crawlspaces, and breezeways. These spiders occur in very low numbers, and usually homeowners encounter only one or two of them.

Yeah, they look like tarantulas. They are freaking terrifying! And who, seriously, “handles” a huge ugly wolf spider, roughly or not????