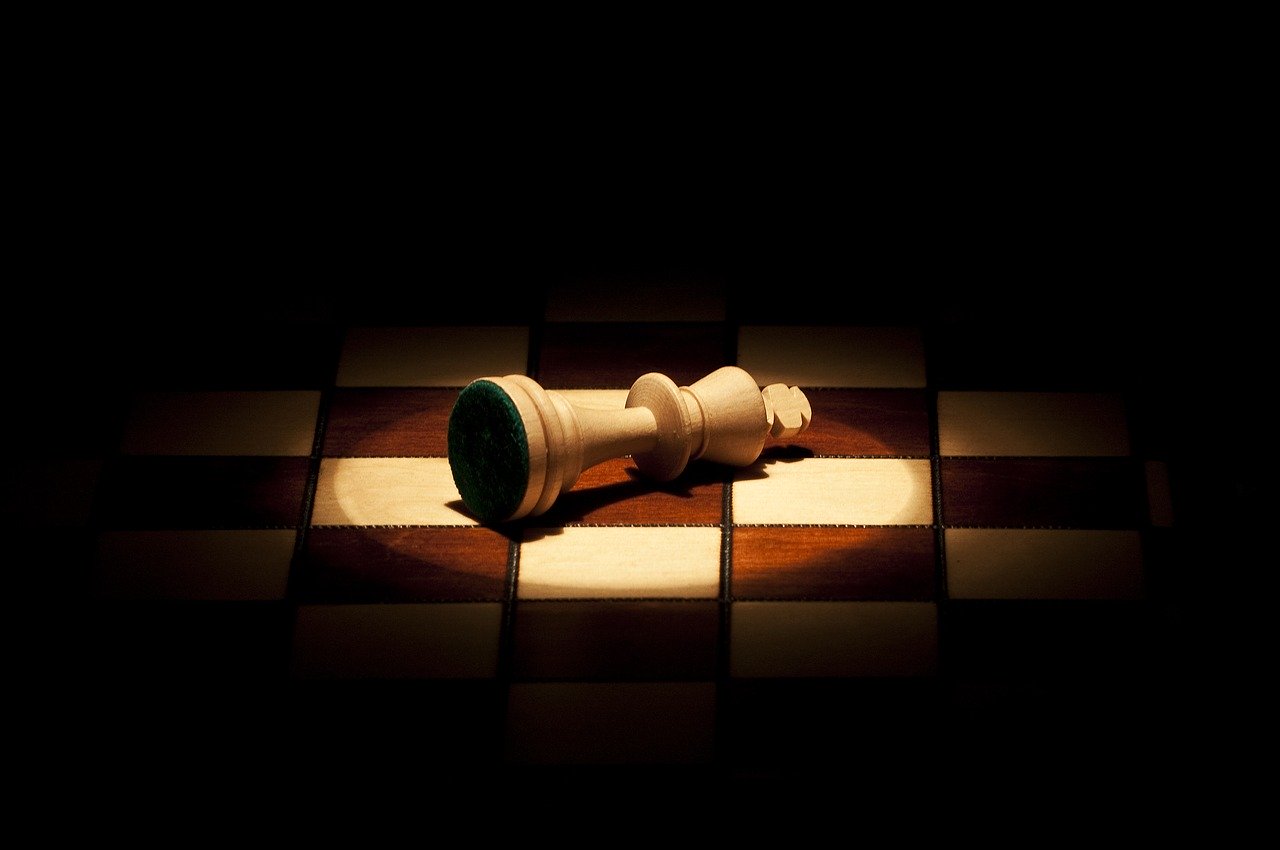 This is the third in a series of posts about abuse, beginning here.

This post is a story about being checkmated in a crazy-making psychological chess game. But it’s not all bad. This is also a story about determination, recovery, and healing.

Both EJ and I feel very strongly that people have the right to make their own choices–whether or not others approve. We strongly respect others’ boundaries. We value the unique differences and unique gifts of people. We value harmony and hate conflict. When we have a difference of opinion–with each other or with others–we try to work to resolve it, seeking win-win solutions or compromises. We try to help others when we can. We hate even the thought of hurting other people. We loathe dishonesty and cruelty. We have a loving, healthy relationship. Relationships with emotional abusers are totally different. The following description is not an over-exaggeration: 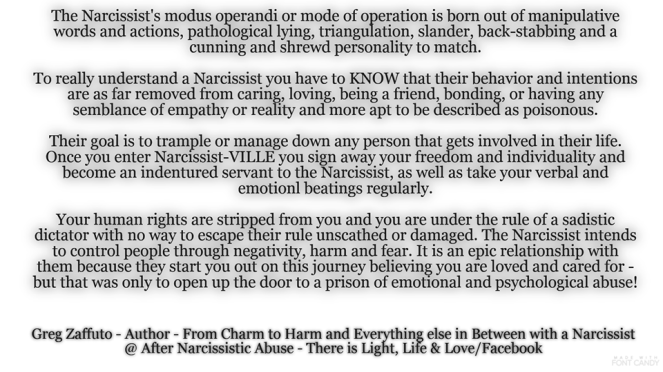 Dealing with an abusive person is a crazy-making experience because there is no way to live together peacefully, no way to resolve conflicts. Every person’s story is different–and I think many of them are far worse than mine–but following is a description of the sorts of things I have experienced when interacting with abusers. I’m describing experiences with a variety of family members over the years. some of them were male, some female, many used a variety of these tactics, so I will use a combined pronoun “s/he” (she/he) to refer to them. Just to be clear, EJ isn’t one of the people I am describing.

As described in my previous posts, an abuser is a person who is very controlling, critical, angry, accuses, has double standards, disrespects personal boundaries, stirs up conflict, and so forth. When faced with such behavior,

It becomes an insane, surreal experience where none of the “rules” of relationship or communication work, nothing makes sense, and you don’t ever really know what to expect. If a person is unable to defend herself or overlook, forgive, explain, confront, walk away, speak, be silent, plead, be near, be distant, break down, be understanding, or compromise, without being verbally battered, how can any of the problems be resolved? I could do nothing to stop abuse, but couldn’t endure it. I couldn’t do two opposite actions at the same time.  I finally reached a point where I knew I would be insulted no matter what I did, so I simply made the best decision I could at any given time–and then I was accused of being passive-aggressive. No matter what you do, how hard you try, how long you try, no amount of love, forgiveness, or understanding can restore a relationship that the other person doesn’t want and is trying to destroy.

EJ and I were ignorant about abuse, believing like many others that difficult relationships could be worked out with enough love and forgiveness until we started experiencing my Mom’s increasing attempts to control us after we got engaged. That was when our eyes were opened and we began to learn about emotional abuse. It’s been difficult because we didn’t find the support then that is now available on the Internet and we had to learn the hard way through struggle and trial and error. Throughout our married lives, we’ve never gone more than a few months without having to deal with one abuser or another in some manner, most of them family members. We were always kept on edge, off-balance, confused, trying to figure out how to be “Christlike” in a crazy world. 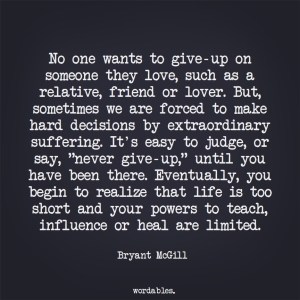 When we tried to set boundaries or go No Contact to protect ourselves, the abusers and/or their defenders stepped in, heaping guilt, blame, and accusations on us: “You are unloving, unforgiving, unChristlike.” “You are dishonoring God, your family, and yourself by having No Contact.” “You don’t know how to love like we do.” “You must never give up on family, no matter what.” Nevermind that their bullying wasn’t loving or that they had divorced their spouses so obviously they had not done what they pressured us to do and stand with family no matter what. Forgive me for the snarkiness, but I felt like saying (but didn’t), “Why, bless your heart!” I’ve heard that that statement in Southern (USA) culture is a nice-sounding catchall insult meaning “I think you are an idiot, naive, clueless, etc.” They have no idea how deeply we’ve loved, how much we’ve forgiven, or how long we’ve endured. Or, maybe they do. Abusers specifically choose victims who are loving, forgiving, and enduring. 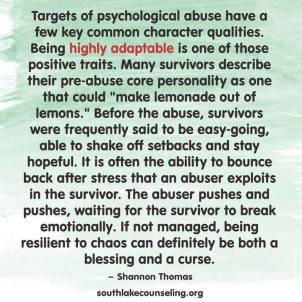 Many people wrongly believe that abuse only involves physical violence and that other forms such as verbal or emotional isn’t abuse or “isn’t that bad.” But every form of abuse is damaging. I used to feel calmer, more patient, more able to cope with setbacks. However after so many years of dealing with emotional abusers, I’ve struggled with depression, sadness, anxiety, I get easily stressed and overwhelmed. I have insomnia and nightmares. I struggle with guilt, self-blame, second-guessing myself, and a sense of failure. I also struggle with some stress-related health problems. Sometimes I feel that even just one more incident of abuse will shatter me. All of these are typical effects of abuse.

EJ says that he thinks I am incredibly strong and courageous because although I have been hit hard, I have not been destroyed. I may be battered and bloody but I’m still standing. I think the same of him because he also has suffered from abuse right along with me. As 2 Corinthians 4:8-9 says: “We are hard-pressed on every side, yet not crushed; we are perplexed, but not in despair; persecuted, but not forsaken; struck down, but not destroyed. 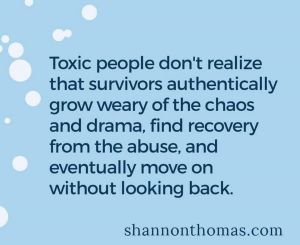 No matter how much we love our families, we can no longer endure the constant drama, the disrespecting of our boundaries, the conflict, the cruelty, the damage.  We have given a lot of chances over the years because we didn’t want to lose loved ones, but for the sake of our health, we will give no more chances unless/until we see permanent evidence of real change. We’ve had enough. (The Bible, by the way, says in numerous places to avoid, stay away from, don’t associate with, and have nothing to do with wicked/abusive people. 2 Tim. 3:1-5, is one of those places.)

It’s impossible to win a game in which the other person cheats and constantly changes the rules. Abuse survivors repeatedly state that the only possible way to win with a Narcissist is to refuse to play their game. “Run,” they urge. “Run, and don’t look back.” They are right. 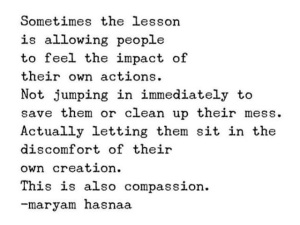 It’s very difficult to explain our conflicting emotions. On the one hand, our hearts ache because we couldn’t heal the relationships with the people we love. We feel deep sadness and grief over things lost–relationships that could have been wonderful but aren’t. But on the other hand, there is also a sense of relief to walk away from something that has caused so much chaos and heartache. There can’t be a relationship as long as there is abuse. I think there comes a point at which further help, support, and unconditional forgiveness only enables the toxic person and perhaps the most compassionate thing to do is step away to let the person reap the consequences of her/his behavior.

We have been checkmated. We lay our king down on the game board in admitted defeat. “You have won and we have lost,” we say, as we sigh with relief and push away from the game we never wanted to play. 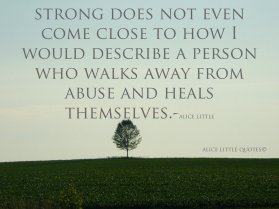 I am actually entering 2020 with extremely hopeful anticipation. Now that we have been thoroughly checkmated, thoroughly defeated, we can start life over with no more manipulative games. We plan to rest, soak in quiet peace, rediscover joyful delights, heal…without constant drama or chaos. We have sought these things all along, but it’s impossible to heal in the midst of abuse because there is so much turmoil and confusion. We plan to have zero tolerance for any sort of abusive behavior. The only people who will be allowed in our lives from this point forward are people who are kind. We anticipate 2020 will be our year of restoration. 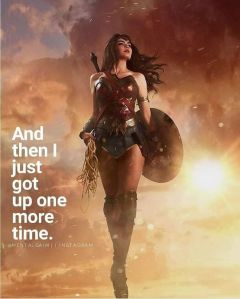 In all these things we are more than conquerors through him who loved us. For I am convinced that neither death nor life, neither angels nor demons, neither the present nor the future, nor any powers, neither height nor depth, nor anything else in all creation, will be able to separate us from the love of God that is in Christ Jesus our Lord. (Romans 8:37-29)

For though the righteous fall seven times, they rise again…
(Prov 24:16)