We have had very cold days for the last month or so. Occasionally we’d have a slightly warmer day and the snow would melt just enough to make everything slippery when the temperatures dropped again. A couple of times we had freezing rain or drizzle. We didn’t have a huge ice storm or anything but was enough to make it slippery. A few days ago we had a freezing drizzle which formed a hard glaze over the snow. I’ve never seen anything quite like it. It was really pretty. I tried to take pictures, but they don’t do it justice. You can see the shiny glaze if you click on the pictures. 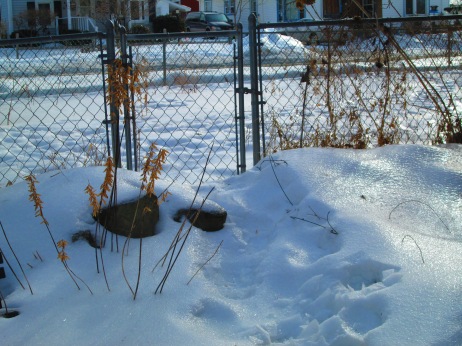 Because it has been so cold and slippery outside, poor Danny hasn’t gotten many walks lately.

EJ and I were very busy today. Every day is packed with things to do. After weeks of difficulties, now the things we need to get done seem to be moving more smoothly. It’s a relief.

This morning we opened a checking account in a bank that has branches here and also up in the Emerald City so both EJ and I can access our funds. It was EJ’s brilliant idea. We also were able to talk to a loan officer this morning and get pre-approval for a loan. That makes it easier and quicker to buy a house.

After we were done at the bank, we stopped at the grocery store for a few items. I was able to get a few empty boxes so we could begin packing. In the USA, we stores let people have the boxes that once held produce and other items. All we have to do is ask. We will need to have lots and lots of boxes.

A couple of weeks ago EJ and I started to pack our books. After we had filled the boxes, we realized that the boxes were heavy and it was going to be a chore to carry the boxes downstairs. So we decided it would be easier to just bring the books downstairs to fill the boxes. JJ helped me bring the heavy already-filled boxes downstairs and then I brought and then I filled the boxes we got today. I thought I’d get the books packed first since we won’t really have time to read them until after we get settled. We have about 9 bookcases upstairs with books double-shelved and also piled on top of other books. We also have a china cabinet downstairs crammed with books instead of china.

Luke is ready to move.

Boxes of books stacked downstairs. Despite all these boxes, we don’t even have one bookcase emptied.

I think the Emerald City still feels like a dream. However, with every task we complete, it feels less like an impossible dream and more like a possible one. Thinking about impossible dreams made me think of an old song called “The Impossible Dream”:

← A Tale of Two Stories
Busy →

3 Comments on “The (Im)possible Dream”