This morning as I got out of bed, I glanced out the window and saw a deer grazing right outside. I snuck out to the living room and got my camera, and then snuck back into the bedroom and began taking video and pictures. I realize that you all may get tired of deer videos, but I’m so thrilled that I can’t help but video them and share them.

A bit later, I heard EJ whisper urgently for me to come into the bedroom. He also saw a deer grazing when he woke up. We haven’t yet mowed our lawn because we just brought the mower up last weekend and we haven’t had time. However, we discussed mowing very little of our yard so we can provide habitat for the wildlife. Of course, we couldn’t mow much of it anyway because we live on the top of a hill and there is forest and ravines around us. But we purposely want to leave as much of it unmowed as we can.

We were sitting in the living room drinking coffee when I happened to glance toward the kitchen window. “Oh, my goodness! Someone is here!” I gasped in shock. We don’t really know anyone yet and we are so surrounded by trees, ravines, and a long steep driveway that I’m always shocked when I see a strange car. And, actually, I haven’t seen many strange cars come up the driveway.

EJ was dressed but I was still in my pajamas so he went outside to talk to the strangers while I rushed into the bedroom to get dressed. When I was dressed, I saw EJ talking to two women on the porch. They carried what looked like Bibles, so I figured (correctly) that they were probably Jehovah Witnesses. I love God and I believe the Bible is true, but I’m not a JW and don’t like talking to them when they come to the door. I know some people engage them in a discussion–which is really what EJ did–but I just sort of say “Thanks, but I’m not interested” as if I were talking to a telemarketer. I think it’s the INFJ Introvert in me that makes me dislike these types of door-to-door visits from strangers. People might disagree, but I don’t really think such evangelistic visits work these days–although I also think God can work any way He wants. I prefer simply living my faith and remaining always ready to give a reasoned answer to anyone who asks [me] to explain the hope [I] have… (I Peter 3:15)

Anyway, I felt at first like hiding and letting EJ handle the visit. Then I thought, “Oh, my goodness! I’m becoming just like funny Miss Twiggley in the old children’s story that my family had when we were growing up! I still remember the first paragraph of the story:

Funny Miss Twiggley
Lived in a tree
With a dog named Puss
And a color TV.
She did what she liked, and she liked what she did,
But when company came
Miss Twiggley hid.

I always liked that Miss Twiggley lived in a tree with her dog, but I decided to go out and join EJ and the women, so I did. We had a nice little chat and EJ said later that he had told them about what we believe. It’s only fair, if they are going to come to our door, that we (or rather EJ) share our faith as well.

After the women left, EJ and I sat on the porch and chatted for a bit as we enjoyed the morning. Mostly I’ve just seen crows flying in our Enchanted Forest. I think crows are very intelligent and interesting birds, and I like them, but I’m eager to see other birds as well. I’ll be glad when we get our bird houses, bird bath, and bird feeders up here so we can attract birds to where we can view them. I’m not going to bring up my birdhouses until late summer after the sparrows at our old house are no longer raising their young, and I can’t put up the bird feeders until the bears hibernate for the winter. But eventually we will be able to enjoy the variety of birds up here. Anyway, I was idly watching the crows flying overhead when suddenly a crow flew straight across our land. Only…it looked sort of funny, and I thought at first it was carrying something in its mouth. I focused more intensely on it…and realized it was a woodpecker. It was HUGE, the biggest I’ve ever seen! It was a pileated woodpecker. Allaboutbirds.org says that

“The Pileated Woodpecker is one of the biggest, most striking forest birds on the continent. It’s nearly the size of a crow, black with bold white stripes down the neck and a flaming-red crest. Look (and listen) for Pileated Woodpeckers whacking at dead trees and fallen logs in search of their main prey, carpenter ants, leaving unique rectangular holes in the wood. The nest holes these birds make offer crucial shelter to many species including swifts, owls, ducks, bats, and pine martens.

EJ just caught a glimpse of it. Later, when we were in the house, we saw it pecking at a tree. I was so absolutely delighted! I’ve never seen a pileated woodpecker before!

I so totally love the Enchanted Forest!

Later in the morning, JJ and I decided to go get the mail. It looked as if it were going to rain, but I checked Accuweather radar and it didn’t really show more than a few little specks of green. So I told JJ that we would be fine, and we ran down the steep driveway, got the mail, and walked back up huffing and puffing. I have a park bench at our old house, and I declare that when we get it moved up here, I am going to put it halfway up the driveway so we can stop for a rest. We were at the top of the hill when the skies opened up and it began to pour. JJ and I ran to the house as he wailed, “I thought you said it wasn’t going to rain!!!”

After my guys left for work, I did a few tasks. First I hung a couple pictures in the living room. I will want advice for hanging the others–like where the studs are in the wall and such. Then I took pictures of the newly painted room.

The room was blue when we first moved in. 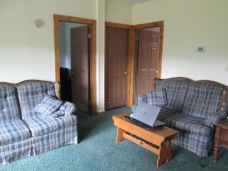 We painted it a creamy color. I think it looks much better.

One of the pictures I hung.

Then I did a live chat with a Lexmark support technician to find out why my computer and wireless printer haven’t been communicating since I brought the printer up to the Enchanted forest. The technician worked with me for a couple of hours and, well, to sum up, I have to find the USB printer cord, which I’m quite sure is still at the old house, then do what my computer tells me to do, and somehow that will get the printer to communicate again.

I also did laundry. I wanted to wash the jeans I was wearing, so I put on my sweatpants that I wear as pajamas and a pullover sweater. It’s not like anyone ever comes up the hill. Except for this morning. I was folding clothes when I heard this big roar, and I looked outside and two trucks drove up the driveway. Oh, my goodness! I rushed around trying to find presentable clothes to put on, hoping I could find them before the people knocked on the door! I finally found the clothes, got dressed, and went outside. Two guys were consulting in the driveway. They were the guys that are going to fix the driveway. Well, the first guy is actually the one EJ called about getting gravel. He arranged for us to meet the second guy, who has expertise in fixing driveways like ours. The second guy is going to come out tomorrow to measure the driveway and write up an estimate.

And so my day pretty much ended the way it began: With me wearing pajamas and panicking when strangers came to my door.

← Projects
When I in Awesome Wonder →