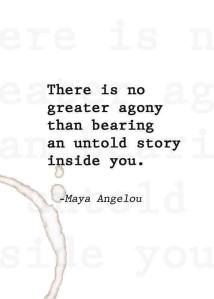 I am a person who writes, and my language is writing, and I need to write. If I don’t, the story builds inside me, threatening to explode, until I release it. I release it through blogging.

In storywriting or telling, there is something called a “backstory.” Dictionary.com defines a backstory as a “narrative providing a history or background context, especially for a character or situation in a literary work, film, or dramatic series.” In other words, a backstory is the characters’ personal history which explains why they are as they are and why they act as they do.

I think every person’s life is a story, and every person has a backstory. People have experiences and wounds and struggles that have shaped them and caused them to act as they do. A person who was physically abused as a child might flinch at an angry voice or sudden movement, for example, or a child who grew up in poverty might become a workaholic. Of course, understanding that a person had a difficult past can help us be more compassionate, but that doesn’t give that person the right to be nasty to others. Everyone has wounds and scars that hurt and ache, so we need to be as kind to others as we want others to be toward us. But even if we try to be compassionate, we can’t always know what triggers a reaction in another.

I like what EJ told me that his mother often said as he was growing up: “The bad things that happen to a child is wrong and not his fault. However, once a person becomes an adult, he is accountable for his actions.”

My backstory is that I have family that is very dysfunctional. I would call them emotionally abusive. Such abuse is tricky for even the victim to understand because it is very subtle and the abuser can seem like a very caring person who only wants what is best for his or her victim. Often the victim is very caring and compassionate, and the abuser skillfully uses that against her. With lies, deception, half-truths, shame, guilt, anger…an abuser makes his/her victim doubt herself, robs her of self-confidence, and overwhelms her identity. Like a physical abuser who hits and then sends flowers to apologize but hits again, emotional abusers engage in cycles of “niceness,” guilting and shaming and blaming, anger and  unforgiveness, that keeps their victim off-balanced.

A website about brainwashing has an excerpt from the book, In Sheep’s Clothing: Understanding and Dealing with Manipulative People, that explains this sort of abuse very, very well. It is well worth reading and understanding. An example of an emotional abuser can be found in the movie Tangled, where the witch who kidnapped Rapunzel undermines, insults, and controls her while seeming to be a loving mother who only wants what’s best for her daughter. Tangled is not merely a sweet, funny movie. It’s a tale of an emotionally abused girl’s fight to be free. The novel T is for Trespass by Sue Grafton also describes such abuse so accurately that I had trouble reading it and only finished it for closure. I had to know that the abuser was defeated.

I have worked through many things over the years as I became aware of the emotional abuse. I struggled to learn how to set healthy boundaries, how to form my own opinions, how to stop second-guessing myself, how to value myself, and how to forge my own identity. I still find myself struggling with these things at times. Sometimes I find myself reacting and resisting when I feel someone is telling me what to think or feel or when I feel that my freedom to form my own opinions and make my own choices is threatened.

My backstory causes me to question and challenge things I have been told or taught because I’ve experienced people pretending to be something they are not, and distorting and twisting words and events.  I greatly value and write about truth and honesty and the freedom to question because I have found Truth to be a knife that cuts through deception, manipulation, and lies. If we know the Truth, the Bible says, it will set us free.

For more than 20 years, I struggled with questions of what it means to repent and forgive, what love really is, and many, many other things too numerous to explain here. And I have grown and been strengthened through it all, and have learned to love my Messiah even deeper. I’m becoming more and more the Me that God designed me to be.

One of the many things I have learned is that we all have strengths and weaknesses, good qualities and bad. We all say or do things that we shouldn’t have, or we don’t say/do things that we should have. Not one person, no matter how good or strong or loving or trustworthy, never fails. Except God, of course. Therefore, acknowledging and repenting of our own wrongdoings and forgiving others for theirs is essential in a relationship. Without a willingness from both sides in a conflict to repent and forgive, a relationship dies, no matter how much one might love the other or want to reconcile with him. Furthermore, if a person refuses to repent or forgive, he cuts himself off from receiving forgiveness because a person cannot receive forgiveness for a wrong that he refuses to acknowledge he committed.

1. If I offend a person, I am obligated before God to repent and ask him for forgiveness.

3. If someone offends me but is not repentant, I must not forgive him because to do so would allow him to continue in his sin and to continue causing damage. This, of course, does not mean that we hate that person, but rather that we do not allow him into our lives.

This is actually very Biblical. For example, Luke 17:3-4 says:

Watch yourselves! If your brother sins, rebuke him; and if he repents, forgive him. Also, if seven times in one day he sins against you, and seven times he comes to you and says, ‘I repent,’ you are to forgive him.” (Luke 17:3-4)

The repentance, of course, must be genuine, not fake. I think that’s why Joseph tested his brothers in Genesis. If he had found them still filled with murderous hatred, I doubt he would have revealed himself to them. It’s only when he saw genuine repentance and change that he told them who he was.

Moreover, understand this: in the last days will come trying times. People will be self-loving, money-loving, proud, arrogant, insulting, disobedient to parents, ungrateful, unholy, heartless, unappeasable, slanderous, uncontrolled, brutal, hateful of good, traitorous, headstrong, swollen with conceit, loving pleasure rather than God, as they retain the outer form of religion but deny its power. Stay away from these people!

And there are other such Scriptures. While we are to be compassionate, forgiving, and give people the benefit of the doubt, I do not think that means that we are to allow unrepentant abuse to continue.

A few years ago, after an especially tumultuous year with my family, a year in which I offered love and forgiveness and a willingness to “start over” and it was angrily rejected, I finally recognized that I could not endure the turmoil any more and I had to protect myself, my EJ, and my JJ. I do not hate my family, I truly forgive them, I pray for God to work in their lives in whatever way He knows they need, and I wish them well, but I acknowledge that sometimes relationship is simply not possible. There comes a point when “enough is enough,” the relationship is unfixable, and we have to protect ourselves and our own families from further damage. Even if there isn’t abuse, sometimes relationships die or grow apart and it’s best to accept that and move on.

I have shared a bit of my backstory tonight only because I have a reason to suspect that my family has discovered my blog. I do not share my real name on this blog because my family has searched for and found previous blogs that I wrote in the past. They criticized and became angry at what I wrote, and tried to control what I wrote, so I finally just ended the blog and thought, “It’s no use, I will just not write again.”

But I am a person who writes, and my language is writing, and I need to write. If I don’t, the story builds inside me, threatening to explode, until I release it. I release it through blogging. There is no greater agony than bearing an untold story inside me. So I started this blog. Of all the blogs I have written, I love this one the most because I love the readers here. You are so wonderfully supportive and compassionate and make writing a joy.

It takes intentional effort to find a specific person’s blog. It takes deliberate looking. So in order to find my blog, my family needed to have sought it out. I just don’t understand why they bother. Although my family doesn’t value me, they won’t let me go either. They won’t forgive, but neither will they let me go my separate way. At one time, I really wanted them a part of my life, but that is no longer the case. After more than 20 years of trying to reconcile with them, after 20 years of turmoil, I have accepted that friendship is not possible, and I no longer want them in my life. I feel sad for what could have been, and isn’t, but no longer have any secret yearnings to reconnect. There has been too much turmoil and too much damage. I want my wishes to be left alone to be respected, as I respect their privacy. I do not seek out my family on the Internet, I do not try to find out information about them. I can’t understand why they can’t just move on and enjoy their own lives and let me enjoy mine. I mean, can’t they find anything better to do with their time then to stalk me?

I remember when I was in 6th grade, a bully harassed my friend. Even though I was introspective and quiet, I went up to the bully and said to her that no one likes everyone, and that’s ok. We don’t have to be friends with everyone. However, if we don’t like a person, we don’t have to torment her and make her life miserable either. We could just let her be to live her life in peace and live our life in peace too. I asked the bully to please let my friend live her life without harassment. The bully did just that. She left my friend alone.

I wish everyone would do that.