I woke up this morning with a lot of congestion and a deep cough. My neck also felt itchy–and I realized that I had been scratching it in my sleep. I looked in the mirror and saw that I have a rash that looks like hives. Seriously? I have no idea what is causing it. Ugh. EJ had only had minor cold symptoms but now he seems to be getting sicker.

JJ had his appointment with his counselor this morning and he wanted me to go with him because he hates going alone, but I told him that I really felt too sick so he needed to go alone.

I was really too tired, but I had a lot of leftover chicken that needed to taken care of so after JJ left I made three homemade chicken pot pies. I cooked one for lunch and froze the other two. After we devoured most of it, I sat down in the living room. I wasn’t sitting long when Danny came to get me. I followed him out into the kitchen, thinking he was telling me that he wanted to go outside. Instead, he led me to the stove where the remainder of the potpie was. Apparently, he thought it was his portion. I don’t think so, Danny Boy.

We were out of a few essentials–like kitty litter–so EJ and I drove to the grocery store after lunch. I managed the little shopping cart until I kept running into things. Then EJ said, “You want me to drive?” because my mind was all fuzzy. I gladly let him take control of the cart. When we got back home and the groceries were unloaded, he fell asleep in his chair. I tried to nap on the love seat, but wasn’t able to fall asleep.

Last night rain began to fall and the wind began to blow, and both rain and wind has continued throughout today. The rain and wind have torn a lot of leaves from the trees so that now there appears to be more bare trees than leafy ones. However, the Enchanted Forest is still very lovely. The good thing about bare trees is that we are able to see more of the horizon, which means that we might be able to see sunrises and sunsets and the Northern Lights.

This afternoon I looked out the window and saw that a bit of sunshine had lit up some golden trees against a sky of dark clouds. It was gorgeous. I ran outside with my camera: Click, click, click. 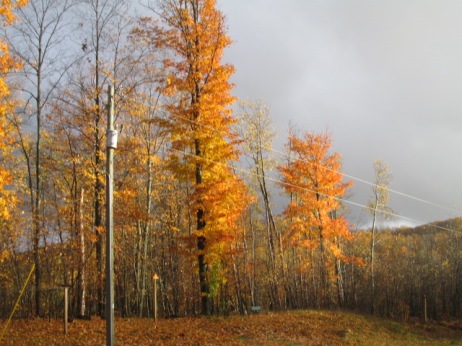 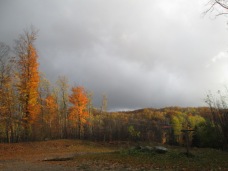 Today one of the Michigan pages at Facebook asked if people were excited or terrified about winter approaching. I commented that I was both because I like winter but we had just moved to this area and I had no idea what to expect. Everyone tells us that the particular area in which we live gets a lot snow dumped on it. Does that mean we will get a few feet of snow? Or will the snow be so deep that it buries the house and we will have to dig tunnels and get sled dogs? I will be glad when we get through our first winter so I know what to expect and can prepare for it. I do sort of look forward to observing the tracks of animals in the snow. It will be interesting to identify what animals are traveling across our property. I bet there are more than deer and wild turkeys and the little rabbit that lives at the bottom of the driveway.

A few days ago I “lost” the visitor map at the right side of my blog. I tried to get it back but it no longer works right. I have contacted support and I’ve also tried to find new visitor maps but most use “Java” and don’t work on WordPress blogs. There are others that sort of work, but I don’t really like them. So if you see weird coding or an item that is there one day and gone the next, that is me playing around with stuff. I’ll figure it out eventually.