This weekend our county had their yearly get rid of old tires for free day so we loaded up the Suburban and drove to the recycling center. First, we looked up the location on Google Maps because we had never been there before. On the way to the recycling center, we found the police complex and an airport that we didn’t know was there. So it really was a journey of discovery.

We knew we had found the recycling center when we saw a mile-long line of pickups, vans, and cars with trailers all loaded with tires. We got in line. The line moved slowly, but EJ and I agreed that Northern Michigan is so beautiful that we really don’t mind being caught in traffic. We rolled down our window and inhaled the fragrance of the pine forest that we were slowly passing. Finally, we dumped our tires off and drove away.

EJ always takes us on roads less traveled. He meandered down a road we had never been on before. It became practically a two-track path through forests. If we had met a car going the opposite way, we wouldn’t have been able to pass each other. “Do you know where we are?” “No,” he replied. But that never worries me because he always is able to find his way, unlike me, who can get lost finding the bathroom in a theater.

EJ did eventually get us back on familiar roads and we ate at our favorite restaurant overlooking the Bay, and then we went to Goodwill. We love thrift shops because we never know what we will find. It’s like treasure hunting. And we pay very little for the treasure.

This trip, we found a beautiful new-looking couch, which was awesome because we really needed a new couch. We never buy NEW furniture because we have so many pets that we’d freak out every time they sat, scratched, or barfed on it. Buying used furniture keeps us calm. If we wear out one and we merely buy another. Anyway, we were looking for a new used couch because our old couch and loveseat were shabby and they had become tortuously uncomfortable after we moved last year. We kind of wonder if they got damaged during the move but we weren’t sure where to find a furniture thrift shop in our new area. So it was serendipitous to walk into Goodwill and find a beautiful couch–for only $50!–that is extremely comfortable and matches the colors in our living room better than the old couch and loveseat did. Although the old ones matched our curtains better. Now the curtains don’t match anything except our rocking chair.

When we got home, we dragged out the old couch and loveseat and pushed them in the Suburban to be taken to the recycling center. Too bad that the recycling center closes each day before EJ gets out of work. He will have to drive around all week with the couch and love seat in the Suburban until we can drop them off at the center next weekend. With the old couch and loveseat out of the house, we carried in the new couch and then had to rearrange all the living room furniture, which was fun. EJ now has his lazy-boy positioned so that he has a much better view out the windows. My view from the couch, where I usually sit, is slightly less good than it was, but still good enough–and much better than EJ’s view had been in his old spot. I’m glad he can enjoy a good view now!

EJ also found a cool picture/shelf/hooks for our kitchen. We were looking for some sort of artwork for the wall. We didn’t know exactly what we wanted but we knew we would know when we found it. It really looks good on the kitchen wall and it has hooks where we can hang our keys. The rooster is appropriate as well! 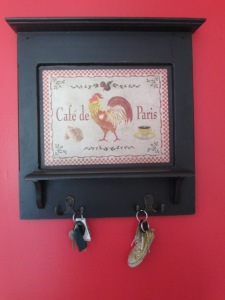 Today I was out in the coop taking care of the chickens and ducks. Every day morning I refill their food dispenser and drinking water. I also dump out the water in the ducks kiddie pool and refill it with fresh water. I also shovel out any poop from the garage floor. I was late doing my chores today because I ended up falling back to sleep after I ate breakfast. Anyway, I was filling the duck pool, lost in my thoughts, listening to the chickens cooing and clucking. Their sounds are very interesting because they are so varied. I heard a slightly different sound and thought about what I recently read–that they make 24-26 different sounds. I wondered what the new sound meant. I finished filling the pool and then turned around and there, in the middle of the garage floor, I saw it!

It was so EGG-CITING! If I could, I would frame it. But I can’t, of course.

So now I have to learn more about eggs. I have already read that they aren’t exactly like eggs you buy in the store. I mean, we have roosters, so the eggs could develop into babies. Yuck. So I have to learn how not to let that happen. I have to make sure I check the coop/pen for eggs every day. And I have to learn how to store eggs. I learned that it’s normal to sometimes see things in the eggs, like little bits of blood. It’s to be expected. I have to get used to that. There is a lot more to raising chickens and ducks than I realized, but it’s sort of fun learning.

Oh! I just went out to the coop and found another egg! This is like treasuring hunting! This egg was actually laid in a nesting box instead of in the middle of the garage floor like the first one.