The week was eventful with both good and bad in it, and happy and sad. It started out rough, but got better as the week progressed and ended well.

JJ doesn’t really know what he wants to do with his life, so he is taking college classes that sound interesting to him. Since he has to work to pay for his classes, he only takes one or two a semester. This term he took a Political Science class. Wednesday he came home from class laughing. He said that one of his fellow students had declared that anyone with a serious illness, such as cancer, is “genetically inferior.” Apparently he thinks that they shouldn’t be given medical treatment or financial help but should survive–or not–on their own. You know, “survival of the fittest.” If they receive treatment and reproduce, they are weakening the gene pool. Sometimes insensitive comments really hurt JJ, but this comment was so over the top, so horrendously and shockingly bad, that all he could do was laugh. His whole class was shocked by the statement. He said after class he asked the student to clarify his statement and the student seem to not really be holding on to this belief too strongly–which he shouldn’t since he also has a serious illness–he suffers from diabetes. He also has a service dog. I’m not sure why. So he, himself, by his own standards, would be in the category of “genetically inferior.”

Wednesday when EJ and I went out to put our poultry to bed, we discovered that our cat Tesla had died. I thought I had emotionally prepared myself for her death because she was very old and had become very frail and I knew that she probably wouldn’t last too much longer. However, I ended up crying a bit as EJ buried her on the slope of our hill.

A few evenings ago EJ and I were sitting on our porch when we saw a flock of about 200 Sandhill Cranes flying high overhead. They are getting ready to go visit my friend in Texas. We share custody. I get to enjoy them in the summer and she gets them in the winter.

Yesterday EJ’s sister and her husband came to visit. We all went to lunch together, which was really nice. They also brought us squash that they had grown and tomatoes that his sis had canned and some seeds from their hollyhocks. I’m excited about planting them next Spring. Our old house was very shady so I could mostly just grow shade-loving plants. I think it was thoughtful for them to bring us the products of their garden. Last year we moved to Northern Michigan and this summer we spent the first part of the summer preparing our old house to sell so we haven’t yet had time to put in a garden. Hopefully next year we can get a garden in. My sis-in-law has offered to teach me to can because I don’t know how. I freeze a lot of our veggies but would love to can tomatoes. In exchange, I could teach her to crochet. 🙂

EJ’s Sis and hubby also brought us Esther, their pet duck. They were sad to part with her, but they felt she would do better with us and our other ducks. Esther was injured last year so she walks with a limp, but she manages ok. She is still adjusting to her new surroundings but the other ducks seem to be accepting her–and Cuddles is overjoyed to have more females.

Michigan has enjoyed a historically abundant harvest of apples this year and we wanted to have apples to celebrate Rosh Hoshana so we drove to a local farm market this morning. The drive was beautiful–well, it’s always beautiful, but it’s looking and feeling very autumnish now. The trees are still mostly green, but every day there are more splashes of color. The temperatures are warmish and coolish at the same time. I alternate between t-shirts and sweatshirts. The morning was rainy/drizzly with heavy clouds hanging very low. We saw mist rising in pillars from the forests. One actually looked rather like a water spout, but I don’t think it was. I tried to get pictures, but whenever we had a clear view we were in areas where we couldn’t stop for a photo and when we were in places where we could pull over the view wasn’t good. Here is the one almost decent photo I got. See the rising mist?

There are orchards and vineyards all over Northern Michigan–and farm markets. The one we went to this morning is not very far from us. I loved it. They had lots of varieties of pumpkins and squashes piled up and the vivid colors and textures were really beautiful. The trees of the orchard were heavy with apples. We could have picked our own apples, but we chose to buy them because we had other errands and stops and chores to do. I like sweet apples and EJ likes tart ones so we chose a half bushel of Gala apples for me and a half bushel of Cortland apples for him. Tomorrow I’m going to make apple cinnamon challah bread and later in the week I want to make lots of apple pies to freeze. I wasn’t going to make any dessert for my birthday, which is quickly approaching, but with all these apples I think I will make a Dutch Pennsylvania Cake, which is one of our favorites. 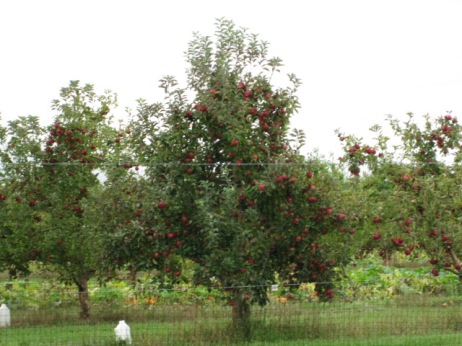 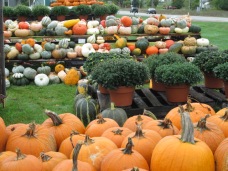 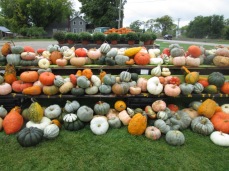 A colorful display of squash

Pumpkins in an old truck

When we got home, EJ finished fixing the leak in the master bathroom while I made homemade bread. He also worked periodically on the shelves in the library. During one of his trips to the garage, he found a hen had escaped into the main part of the garage. He had to chase her down and put her back in the pen. So the chickens can’t escape again, he finished putting snow fence over the top of the cage containing the coops in the garage. While he was working on fastening the snow fence, I could hear the loud upset complaints of the chickens. Every little change in their environment upsets them.