EJ has a very beautiful drive into work every morning. He gets to drive through forests and along the coast. This morning he texted me that the sunrise was gorgeous. Alerted, I took my camera outside with me when I went to let the ducks and chickens out. We have trees all around us so I don’t have a clear view of the horizon, but I could see the fiery sunrise through the trees. It was stunning: 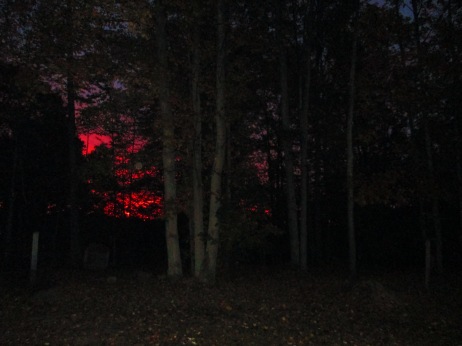 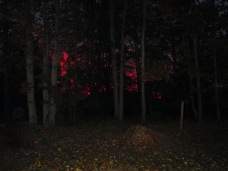 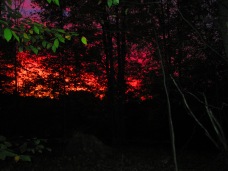 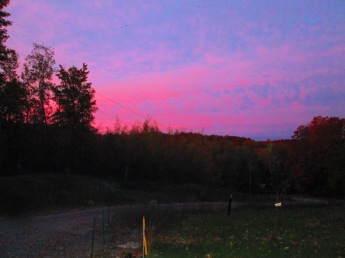 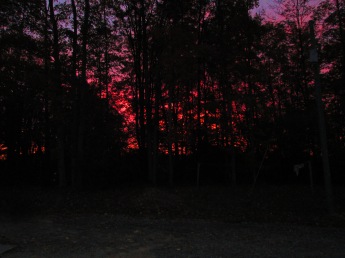 I’m sure the sunrise was so beautiful because of an approaching storm. When EJ got home from work, he asked, “So what did you think of the snow?” JJ and I both asked, “What snow?” because it had rained here all day. EJ said that it had been snowing since about 4 p.m., and it snowed all the time he was driving home, and it was even snowing as he drove through the little town about two miles from us. But up in our Enchanted Forest, it only rained. And rained.

I have experienced all sorts of new things since I have moved north. Like propane. I’ve always lived in a town and I’ve never lived in a house that used propane. So…yesterday our new propane company brought us a tank. They filled it with 25 gallons of propane to last us until the fuel truck came to fill it all the way up because, duh, they can’t be hauling a huge tank sloshing with a bunch of propane. Well, the fuel truck came lumbering up the driveway about mid-morning today. After the guy filled our tank, he came to the door to give me the invoice. The guy filling the tank was one of the same guys who had been here yesterday and this time when Danny greeted him at the door, he gave him a dog biscuit, which Danny took very politely. I thought that was very nice of the guy.

I took some time to crochet this morning, but I spent most of my time doing laundry and cooking. I have to use the apples that we bought at the farm market a few weeks ago. Last week I made apple pies which I put in the freezer. Yesterday I made Apple Brownies, which were very good, and today I made Apple Hermits, which were even better. We didn’t know what “hermits” were–I mean, as far as food goes–but we decided after eating one (or two or three) that they must be called “hermits” because after tasting how good they are a person really wants to take all the cookies with him (or her) to an isolated place so he doesn’t have to share them with anyone. That’s our theory.

We all have symptoms of PTSD from a variety of sources and difficulties. Most of the time I think we are patient and supportive of each other, but sometimes one person’s PTSD symptoms get triggered and can also trigger another person’s PTSD symptoms, which makes emotions a bit difficult and messy. I think it’s difficult enough when one person in a family is dealing with PTSD symptoms. October is emotionally difficult for JJ because it was the month he was diagnosed with cancer. And this year was even more stressful because he had to have a blood draw and an appointment with his oncologist. He is really afraid of his cancer returning. His response to this stress triggered my struggles with abuse. We are trying to re-stablize our battered emotions.

I feel as if we are so weary that, well, it’s kind of like….If a wealthy person’s car breaks down and needs major repairs, he has the money to get it fixed. No big deal. But if a poorer person’s car breaks down, it’s a major problem because he doesn’t have the money to repair it. In the same way, normally we have had the strength to deal with problems, but we have gotten so depleted that everything seems to bankrupt our meager energy supply. Life doesn’t stop because we are tired, and there will always be problems that we have to deal with. However, one problem that we can diminish is toxic people who cause turmoil in our lives. We have decided that we just aren’t going to deal with them for a while. We are going to give ourselves a break, for however long we need. And, seriously, only those who respect the boundaries we set for ourselves will be allowed access to our lives.

In addition to not allowing toxic people in our lives, we also are filling our lives with as much delight as we can. Such as enjoying sunrises, chickens and ducks, and working with our hands, and enjoying the beautiful area we are living in….and enjoying our delicious Apple Hermits.

Oh! One more thing! EJ got home from work late today and he was tired, and it was raining, and it was getting dark so we didn’t band anymore chickens. However, with the help of google, I was able to figure out how to put the video that JJ had taken of us banding the chickens on Monday on Youtube so I can share it here. Just a warning, though: I don’t know how they do it, but without fail my guys somehow always seem to take HORRIBLE photos/videos of me.  So I think I look pretty awful in the video. This is why I like to be the one on the other side of the camera. But here is our Chicken Roundup video.