Our weather has been rather wacky lately. One day I’m wearing a hoodie and shoes, the next day I’m back to a coat, boots, hat, and mittens. One day we have temperatures up into the 50s and 60s and our snow melts, the  next day it’s snowing and temperatures drop into the 20s or teens. I actually like every season and type of weather, although I respect the challenges and damage that storms can cause.

In addition to warmth and cold,  sun and snow, we had severe thunderstorms in the wee hours of Tuesday morning. They woke EJ up and he unplugged our computers; JJ and I slept through the storms. We’ve had a couple of days of very strong wind. The wind caused the trees to sway wildly from side to side and the snow to swirl around with last year’s leaves. I love the wind, although living in the forest there is always concern that a tree will fall onto our house. Since we’ve lived here, we have heard the trees creaking and cracking and falling in the forest during wind and storms. In fact, this week’s storms “broke” a tree and other trees are holding their fallen comrade up. The wind knocked out power in several thousand homes in surrounding areas. We lost our internet for a bit but otherwise were unaffected.

This is what our weather looked like on Wednesday:

The deer are still visiting, but not quite as often now that they can find food elsewhere. They are mostly visiting when it’s snowy. When warm weather finally stays, I will have to put away the birdfeeders and then we won’t see the deer much until next winter. We have to put away the bird feeders in the Spring so the hungry bears waking from their winter sleep aren’t attracted to them. I have never seen a bear on our property, but I know there are bears in our area. Not long after we moved to Northern Michigan, someone posted a video of a bear seen just outside a town about 30 minutes from us. And last autumn I heard a customer at the farm store tell the cashier that a bear had destroyed their bird feeder. That customer lived outside a little town about five miles away.  I’ve read that once a bear finds a food source, it will remember it and return. I can’t think of much that would scare me more than coming face-to-face with a bear.

With the (mostly) warmer temperatures, the ducks and chickens are spending more time outside. I can see them from our bedroom window. It’s fun watching them.

The ducks and chickens are also laying eggs again. All seven of our hens are laying eggs just about every day, and two or three of our five female ducks are laying–that’s ten eggs a day. I’m not exactly sure what to do with all these eggs.

Yesterday one of the ducks laid a “fairy egg.” They are also sometimes called witch eggs or wind eggs. Fairy eggs are tiny eggs that happen occasionally when something has disturbed the female duck or hen’s reproductive cycle Many times it doesn’t have a yoke. Our fairy egg had a very tiny yoke. 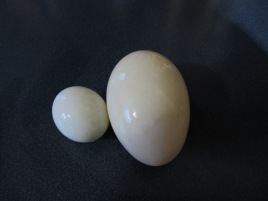 A regular sized duck egg and a tiny fairy egg. 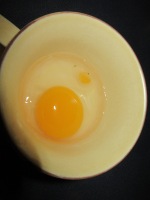 I cracked a regular duck egg and a fairy duck egg. The yellow dot is the yolk of the fairy egg. 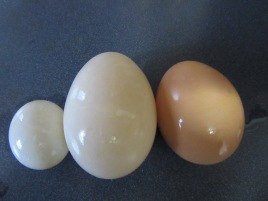 Last year both JJ and I received Jury Duty summons. We filled out the form and returned it, but hadn’t heard anything back all these months and months. Until now. I received notification in the mail of the dates when I have to show up at the courthouse: April 18-19. JJ has not yet received notification. Every county does things differently. In one county in which I lived, a person’s time of duty was a week. In another county it was a month. In our new county, it is apparently two days; of course, it could be longer if a case goes on for more than two days. I read that we will serve as a petite juror. I didn’t know what that was or how it differed from any other type of juror so I googled it. A petite juror is one who could serve on a civil or criminal case. I’m really, really hoping that I won’t be a juror in the trial of a couple that I read about in the news last month in which they tortured and murdered the woman’s father in his home with a knife, ax and crossbow, then left him to die. Just the details mentioned in the article was enough to turn my stomach. I don’t think I could handle hearing more gruesome details. Photos of the couplce and their victim accompanied the article. JJ said that he recognized them all: they had occasionally shopped at the grocery store he works at. Yuck.