All throughout today–and even through the evening–the rain poured, then stopped, poured, then stopped, as if someone was repeatedly turning a faucet on and off. When it rained, it rained hard. At times patches of blue briefly appeared through holes in the clouds before the rains came again. During the sunny moments, I dashed outside to look for a rainbow. I never did spot one although people on Facebook shared the rainbows they saw.

We often see fog? mist? clouds? rising from the hill across the road from us. EJ always says it’s a cloud being born. It’s really very beautiful. During one of my dashes outside to look for a rainbow, I saw the fog rising from our own Enchanted Forest. It was beautiful. I felt as if I were part of something magical.

Here is a video I took of the magical sight. It’s short because I wanted to make sure I also had time to take photos:

After I took a few photos, I could a second video. You can see it here: Magical Mist.

In between downpours, I took a treat of vegetable scraps out for the ducks and chickens. When I opened the garage door, I startled a flock of mourning doves that were in the back yard. I think there were something liked 20-30 of them–the most I’ve ever seen. I kept hoping they would come back so I could photo them, but they didn’t. Bummer.

The day was chilly. Definitely sweatshirt weather. The poultry pens became flooded. The ducks didn’t seem to mind the flooding, of course, but the chickens don’t care for it. The wet straw feels spongy when I walk on it, and my work shoes sucked into the mud. I really dislike the feeling.

Shelob made her hole small again to shelter herself from the pouring rain.

The sky was beautiful with dramatic clouds throughout the day. Here are some:

The hills across the road.

Mist rising from the hills across the road. 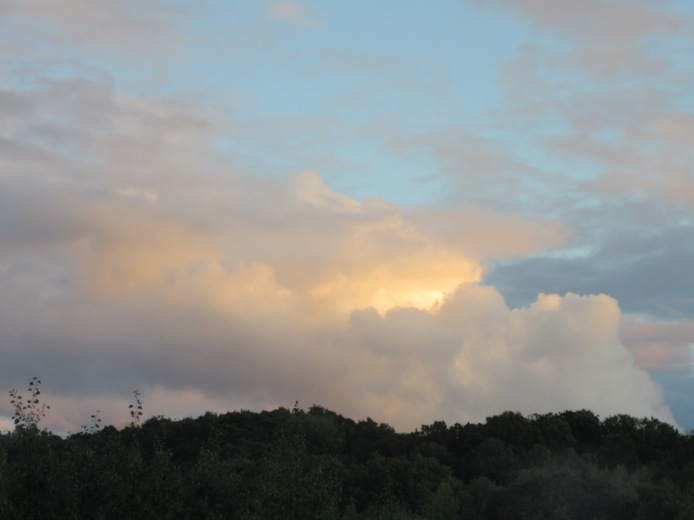 All the chickens were in the coop when I went to put them to bed–except for Sassy, who was outside for one last look around before he joined the others. He is such a good rooster. While I was shutting the chickens’ little door, the ducks came waddling in. I didn’t have to herd them tonight. The Christmas lights cast a warm glow over the snug coop. After everyone was safely in, and their doors shut, I said “Goodnight,” turned off their lights, and left them to go to sleep. 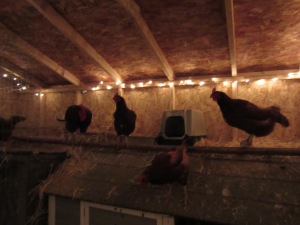