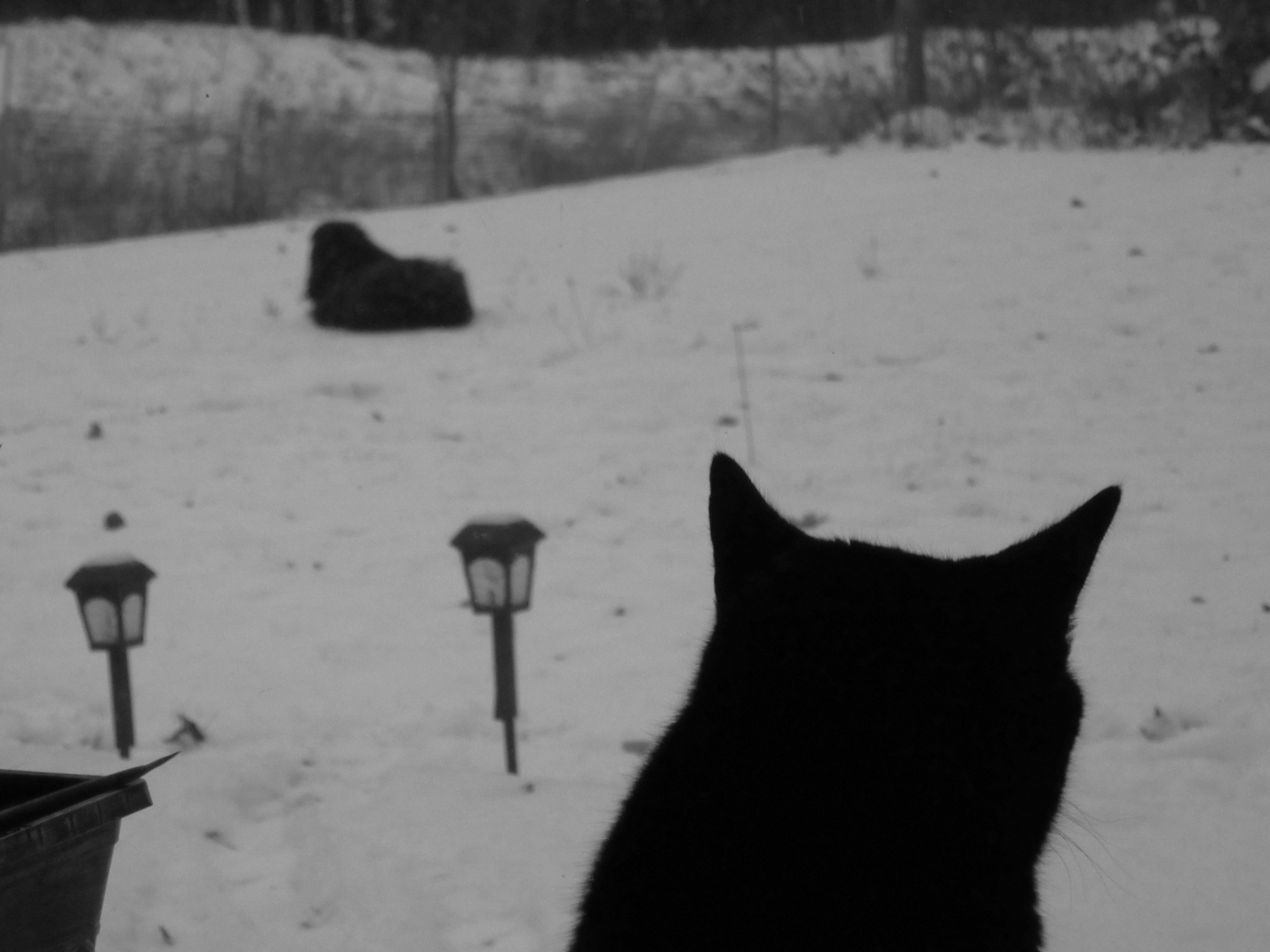 Yesterday a group of JJ’s friends came over to go sledding on our driveway. There were five adults and two kids. JJ said that there would have been more but some of his friends couldn’t make it. They seemed like nice young people. I’m very glad that JJ is making some good friends here. The kids in the town we used to live in didn’t have the same interests as JJ and some of them were quite mean to him so he never really felt that he fit in. He’s really finding his place here in Northern Michigan though.

One of the friends who came sledding is a young woman who JJ is just beginning to date. She seems really nice: She has a good sense of humor, she loves Doctor Who, she loves chickens and ducks, she loves to learn. What’s not to like about her?

JJ had warned his friends that our driveway was steep so they all parked their cars at the bottom rather than attempt to make it up to the house. Still, one girl pulled into the snow and got her vehicle stuck–but fortunately the others were able to get her out. They all had fun sledding down the driveway. We had warmer temperatures for a couple of days, and then the temperature cooled a bit, so the driveway was very slick.

Early this afternoon I told JJ that I was going down to the mailbox for our mail. He decided to come along with me. I was going to walk down, but JJ insisted we sled down. I was all for it. I hadn’t gone sledding yet this year because the sleds were stored in the rafters of the garage and I just hadn’t gotten around to getting them down. But, of course, JJ got them down for his sledding party. He and I sledded down and the driveway was so icy that we went very, very fast–scary fast. I screamed all the way down and was sure I was going to die. It was awesome. I told JJ that it was like pod-racing.

We prefer to celebrate Hanukkah because it has such deep meaning for us. Hanukkah is about not letting the darkness of the world overcome our light and believers in Jesus (Yeshua in Hebrew) can celebrate Him as the Light of the World. After several years of our younger cats climbing the Christmas tree, bending it out of shape, knocking off the decorations, and killing the lights, we finally threw it out and didn’t replace it. We are content with the beautiful lights of the menorah shining in the dark.

We hadn’t really exchanged gifts since JJ was diagnosed with cancer in October 2013. Instead, we started a new tradition of going to see the latest Star Wars movie in the theater on Christmas day. But this year JJ asked if we could exchange gifts–and we thought, hey, why not, it’s fun getting a gift now and then. We kept the cost low so it wasn’t a financial burden for any of us and there was no hectic shopping.  We called it our Hanukkahmas gift because we weren’t sure if it was a Hanukkah or Christmas gift. Each of us gave the other two a gift so we all got two gifts. JJ asked if we could open the gifts tonight, and we didn’t have a problem with it. It’s not like we are little kids.

EJ gave JJ a pair of nice gloves and mittens which he’s been wanting. Since he had cancer, his hands get very cold. I got JJ a key finder because he’s always misplacing his keys, phone, wallet. The key finder has four tags that he can attach on four items.  The tags will beep when he presses a button on a remote so he can find them. (If he doesn’t misplace the remote….) EJ got me an electric kettle so we can have hot water for tea or cocoa without using the stove. JJ gave me an Amazon gift card, which I immediately spent–on the second and third Hobbit movies and a Michigan Rocks & Minerals book so we can learn to identify the treasures we find while out rockhounding. I love Amazon gift cards because I get the fun of choosing what to buy, then the anticipation of waiting for it to be delivered, and then the enjoyment of using the item. I bought EJ a set of books he’s been wanting. JJ got his Dad a Jayne hat from one of our favorite TV series called Firefly. EJ has wanted one for a long time and when he learned that JJ had gotten him one, he immediately quoted from the series, “A man walks down the street in that hat, people know he’s not afraid of anything.”

EJ’s gifts haven’t yet arrived in the mail, but he didn’t mind. He has something to look forward to.

Today while EJ was at work, I texted him a photo of a dog at a shelter and, with EJ’s agreement, I submitted an application to adopt him.  Later when EJ found out where the dog was located, he said, “You realize that it’s a 5 hour trip to get the dog?” That’s 5 hours one way. It would take us 10 hours to drive there and back again. We decided that as awesome as the dog seemed to be, it was too far. We agreed to withdraw our application and look for a dog from a local shelter. I told EJ that I have all these beautiful dogs needing homes appearing on my Facebook newsfeed–probably because I have “liked” many Michigan animal shelter pages–and my heart melts with longing when I see them. I really miss Danny and I have a very strong, overwhelming craving for a dog. I can hardly bear it. “It’s ok if you tell me that it is too soon to get another dog,” I told EJ. “In fact, I probably really need you to slow me down and tell me no for a while because I really think it’s too soon to get another dog but I can barely resist the temptation.” EJ said to me, “You should see what I am looking at on my computer.”  I walked over to his chair and looked at his computer screen. It had photos of cats needing homes. In fact, throughout the evening he had been telling me about several cats who need adopting. I have a strong craving for a dog, EJ has a strong craving for cats. We will be ok if we can tell each other “no.” Otherwise we are in trouble.