The End of Winter?

The difference between last weekend and this weekend is totally amazing. Last weekend we got 20 inches of new snow. During the week the temperatures steadily rose into the 30s, 40s, and then 50s. Today the temp reached 60! Whoo hoo! The snow is quickly disappearing. Again. I’ve lost count of how many times the snow has melted and fallen. I’m hoping that this time Spring has finally come to stay. 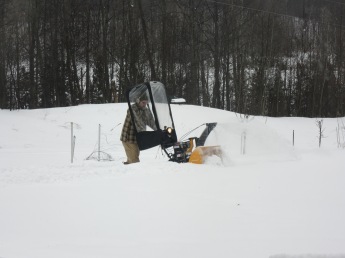 During each day last week the warm temperatures melted more of the snow. At night the temps cooled and the melted snow refroze. It formed a hard glaze on the surface of the snow, which was very slippery. It was so slippery that EJ parked at the bottom of the driveway and walked to and from the suburban at the beginning and ending of each work day. He didn’t try to drive up to the house until Friday afternoon. I was very careful whenever I had to go outside.

In addition to the wild birds and deer, I saw turkeys wandering through our yard several times last week.  The males were displaying their beautiful plumage in hopes of getting the attention of the females. They got my attention: I whispered, “Oh, my goodness! You are BEAUTIFUL!”

A couple mornings ago when I was in the garage giving the outside cats their portion of canned food, I saw Miss Madeline Meadows through the pet door flap. The cats usually are waiting for me in the mornings, and I couldn’t imagine why Madeline was remaining outside. I opened the door and discovered the reason why. Miss Madeline had killed a full-sized rabbit and was trying to take it through the pet door. I’m not even sure how she was able to carry it! I closed the door and went into the house. Later I found the gnawed rabbit in the garage near the cats’ food dishes. I didn’t take a photo of the rabbit because it was sad. I am glad Madeline gets the mice, shrews, voles, and moles, but I am sad that she also kills squirrels and rabbits. Miss Madeline Meadows is truly a serial killer cat.

This morning when I got up, I found EJ and Hannah sleeping together on the couch. EJ told me later that he when he first got out of bed, he found Hannah on the couch looking sad. I had shut her out of the bedroom because a large dog and 3-4 cats in the bed makes it too crowded to sleep. EJ and Hannah looked cute together. Then I saw Hannah with a really goofy expression on her face so I took her picture and told her I was going to share it on my blog. Ha ha!

This afternoon EJ and I drove to TSC to buy some poultry feed, dog food, and a garden hose. Next we stopped at Goodwill. I found a few Michiganian t-shirts and a book called Michigan Seasons – Classic Tales of Life Outdoors. Hey, there’s a reason EJ calls me “Michi-centric”–I love my state. Since we hadn’t had lunch, we stopped at Culver’s. It was so nice outside that we ate our meal at their outside picnic tables where we could enjoy the sunshine and a view of the bay.

We took Hannah with us. She always wants to climb into the front seat with us, where she’s a huge distraction for the driver so a few weeks ago I bought a harness with a seat belt attachment to keep her in the back seat. Even with the restraints, she tried to stretch to get into the front seat with us–and then whimpered when she couldn’t. She has some learning to do.

We ended our outing by stopping at a boat launch to look at the beauty of the lake. There were a lot of people in their boats fishing. We had to wait for one group to reload their boat on their trailer and drive off, but then we walked Hannah to the water’s edge. She wasn’t quite sure what to think of it.

I look forward to going on adventures when the weather gets warm.

4 Comments on “The End of Winter?”