It obviously rained overnight although there was only a light rain falling when I woke up this morning. That soon ended as well, although the day continued to have dark gray clouds and a feeling of dampness in the air. As usual, I stumbled half asleep through my morning chores and then settled into my chair with a steaming cup of coffee. I don’t fully wake until I’ve had two or three cups of coffee.

After EJ left, I did some laundry. I’m trying to do laundry only on Fridays–except for a load of towels midweek–but he asked me to wash his work caps so today became my laundry day. I didn’t try the clothes on the line because, the weather being what it is and all, I didn’t think the clothes would dry. I also didn’t want to have to quickly bring the clothes in if it started to rain again, although the chances of that are slim–or so says the National Weather Service.

Today was the day I expected my new dehydrator to be delivered by UPS. I like to track the packages as they move across the country, and I have text notifications sent to my phone to alert me when packages are delivered. It’s a good thing I do because the UPS man did not bring the dehydrator up to the house. Instead, he left it in The Magic Box. The Magic Box is a large wooden box at the bottom of our driveway. We have been told that the previous owner of our house built it to store his garbage in, safe from bears, until garbage pick up day, but we use it for postal and delivery people to leave our packages in during the winter months when they refuse to attempt driving up our driveway. I have named this box The Magic Box because sometimes packages magically appear in it. Usually the delivery people bring our packages up to the house in the summer months, but this summer they haven’t been, which means when I get an alert, I quickly go down the driveway to retrieve our packages. I don’t like to leave them in The Magic Box too long because I don’t want them to get stolen or anything.

When I received the text notification that my package was in The Magic Box, I hurried down the hill to get it. I contemplated taking Hannah with me, but decided it might be too awkward to carry the dehydrator and handle her. I contemplated driving the Xterra down to transport the dehydrator back up the driveway, but I thought, “How heavy can it be?” Our previous dehydrators, which died last year, were quite light. They were just cheap ones that we found at thrift shops. So I just walked down the driveway without Hannah or the Xterra.

Next I had to get the dehydrator up the hill. I took a deep breath and lifted the box by its packing straps. It was heavy. I walked forward a couple steps and then had to put the box down. Another deep breath and I lifted the box again and moved forward a couple steps. At this rate, it would take me until winter to get it up the hill and into the house. I suppose then I could always slide it on the slippery snow…but I didn’t want to wait that long. I finally left the box partially hidden in the long grass at the side of the driveway and walked up the hill to the Xterra. I drove the Xterra down, turned around in our Vacation Neighbor’s driveway, and pulled up by the box. With great effort I lifted the box, heaved it (gently) into the back of the Xterra, and drove back up the hill.  Stage 2 completed.

I huffed and puffed and heaved the box into the house. Hannah watched me through the window with great interest and curiosity. She probably thought, “What craziness is Mama doing now?” Do you ever wonder what our pets think of the things we do? I finally got the large box into the kitchen. Then I had to unpack it. Hannah tried to help. I strongly suspect that she believes every package that arrives is a gift for her. Not this time, dear.

I used an old pair of scissors that we use to cut open everything and slit the packing tap and opened the shipping box. I then had to wrestle the box that the dehydrator is packaged in out. I finally got the box out of the box, and then wrestled the dehydrator out and heaved it (again gently) onto the kitchen table. Whoa….it is big. It is almost as large as the table.  I wiped down the ten racks as the booklet instructs and slid them into the dehydrator. I am all set to go now! 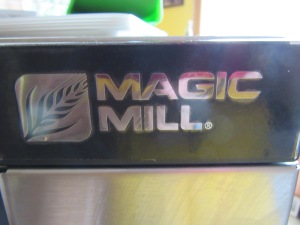 This is an awesome machine! Since I often refer to our property as our Enchanted Forest, I find it totally appropriate that the name of the dehydrator is “Magic Mill.” I mean, of course an Enchanted Forest would have a magic mill. It really couldn’t have any other kind.

I was tired and sweaty from all the heaving, and pulling, and opening, so I sat in my chair to recover. However, Hannah decided that she wanted to go outside. She doesn’t take “no” for an answer, and she will grumble, growl, put her nose in my face, and nudge my computer aside until I take her out. With a sigh, I got up, put her harness and leash on, and off we went. I took a long my camera so I could take a simple picture of The Magic Box for this blog post. Part way down the hill, however, the Hannah and I and the turkey family surprised each other. The Mama turkey squawked a command and all the babies flew up to the trees for safety while the Mama scolded us from the ground. I had my camera in my hand, but the sight of the babies flying up in formation like the Air Force Thunderbirds was so magical that I just stood there enthralled, camera forgotten. Once in the trees, the babies were very difficult to see–and the Mama was alarmed and Hannah was trying to pull me over to her–but I did manage to get one photo:

I’m actually very glad that the turkey babies can fly to safety. I have been very worried that Madeline, our sweet serial killer cat, would get to them. I’m reassured now that they are not quite as vulnerable as I feared.

I pulled Hannah back up the driveway so the turkey family could get over their fright. I didn’t get a photo of The Magic Box, but I decided to just use the one I took after I wrestled the dehydrator out of it.

JJ stopped by for a few minutes. He works so many hours that we rarely see him but we do talk on the phone occasionally and chat on Facebook. Jared gave me a Richard Castle book based on the TV series “Castle” that he had found at a used book store. He also hunted down Luke, our Sith Lord cat, which is actually JJ’s cat, only he can’t have him in his apartment so he gives him lovings when he visits. JJ couldn’t find Luke at first, but finally located him under the bed in the guest room.

EJ probably would get home super late today because he might help dismantled some kitchen cabinets at his company at the end of his work day–no doubt, from their break room.

← Chocolate Mint Tea
The Bumblebee and Me →

3 Comments on “The Delivery”