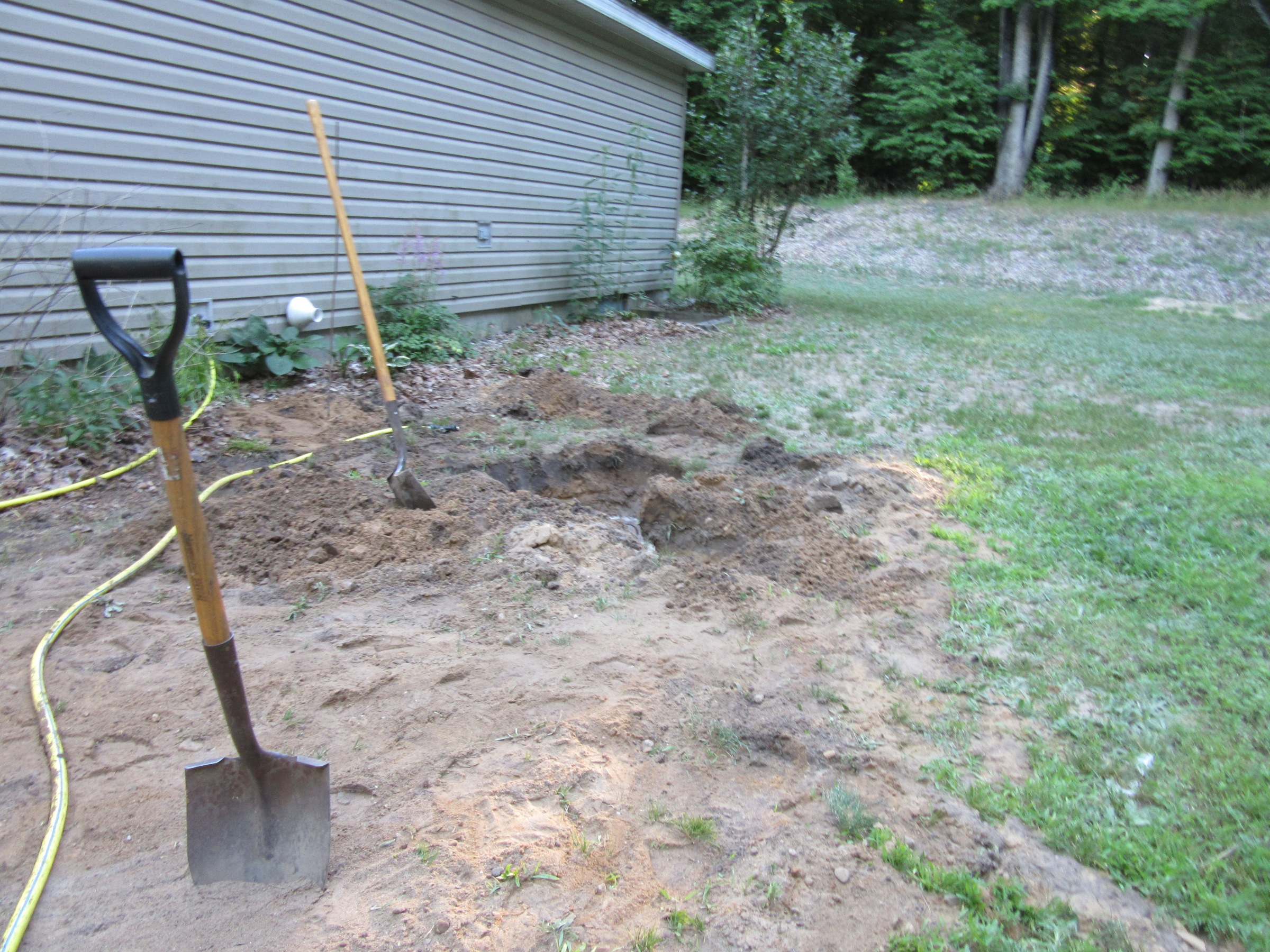 Sunday evening we had a bit of a storm. It wasn’t that severe, but we did get a little bit of rain. It quickly moved on and left a beautiful double rainbow behind.

Monday was cooler than the previous two days had been. It was still hot, but the temps were in the mid-80s instead of close to 100 (F). We had a little more energy. We took Hannah with us to TSC to get poultry feed for the ducks and chickens and canned cat food for the cats. We stopped at the grocery store. EJ stayed in the car with Hannah while I went into the store to buy a couple things, including Moomer’s ice cream for a special treat. I chose Chocolate Almond Fudge for EJ, which he said was the best chocolate ice cream he has ever had. I chose Carrot Cake ice cream for me. I’ve had it before and it is one of my favorite flavors. Although, as EJ says, when it comes to Moomer’s ice cream there is no wrong answer. All flavors are delicious.

EJ called a septic tank place to come and clean out our septic tank. This will be the first time we’ve done it since we’ve moved here. We have no idea when it was last done. The septic is cleaned out with a large vacuum that sucks up the crap. The guy(s) will be here on Monday, which means I have to deal with them because EJ’s vacation will be over. In preparation for the guy(s) coming out, we had to dig out the septic tank lid so all they have to do is open it. We knew the general area where the septic tank is located, but not the exact spot, so we dug several holes in the back yard trying to find it. I said to EJ, “It’s too bad we don’t have long poles like they use after avalanches to find buried people/items.” When I was a kid, I read a book about a town that was buried in an avalance. EJ said that was a good idea so he went into the garage and found a long thin metal pole. We dug shallow holes in the sand and then he stuck the pole into the softer ground to see if it hit anything. We actually found the septic tank quite quickly after that, and we were able to find the lid. While EJ dug it out so it was completely uncovered, I filled in the other holes. EJ says that from now on it will be easier to locate the septic tank because we know where it is. EJ grew up in the country so he has experience with stuff like this, but until we moved to our Enchanted Forest, I’ve always lived in a town so things like septic tanks are completely new experiences for me. I was afraid it was going to be very, very expensive to get the septic tank pumped out, but it isn’t that bad. It’s always nice when something is LESS expensive than I expect. Usually it’s more.

EJ also called the heating guy yesterday to get moving on getting the compressor fixed. A guy came out and looked at our geo-thermal unit this morning and he said he’d have an estimate ready for us by Thursday. We have no idea what it will cost for the part and labor and only hope it’s not too awfully expensive. I don’t think we’d bother with the air conditioner if it wasn’t that the heating is also affected. The guy who came out today said he had been to our house before. He knows the previous owner, who now lives in Texas. I think it must be weird to see strangers living in a friend’s house. And the house itself looks different: We painted the walls of most of the rooms after we moved in (we just still need to paint the master bathroom) so the colors and our furniture is different from the previous owners’. The house would seem the same, but also different. Weird to think about. 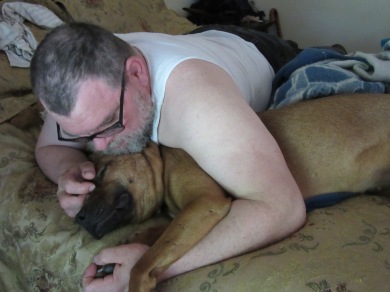 Today was hotter than yesterday but not as hot as the weekend. The temperature was about 90. It was hot enough to make me sweat whenever I did anything, so I would do a task and then sit in front of the fan to cool off before going out to do another chore. I got most of the flower garden in front of the house weeded, did laundry and hung the clothes on the line, and I cleaned the house. EJ sat on the bed to talk to me while I folded clothes and put them away, and Hannah joined us. She and EJ had a bit of a cuddle. It was cute. Danny, our previous dog, was totally devoted to me. Hannah also is devoted to me, but she loves EJ too.  I loved Danny’s single-heartedness, but I’m also glad that Hannah is willing to share us. When she plays “fetch” with us, she will bring her ball to me, and then to EJ, then to me, then to him.

Sometimes when EJ has days off, we go off and have adventures, but this week we mostly just want to get things done around the house. It’s very satisfying to check things off our list. Because of this week’s weather, we are not getting as much done as we had hoped–heat and humidity drains us of energy. Still, we are getting quite a few things done.

I made Hannah Joy another “ice bone.” I didn’t have a half-gallon milk carton so I used a paper cup. I filled it with water and put it in the freezer yesterday. Today I got it out and tore off the paper cup. Hannah loved it. I put it on a tray so it doesn’t get everything wet when it melts, but Hannah carries it off to a more desirable place where she can enjoy it in comfort. She growls at the cats if they get close, and I exclaim, “Hannah! The cats don’t want your ice!” 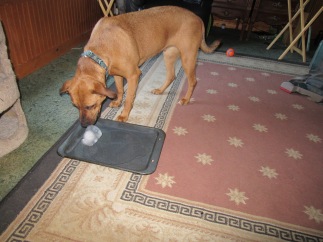 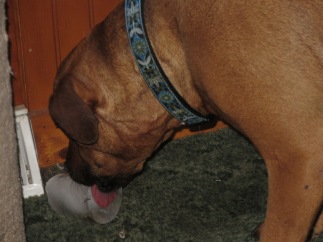 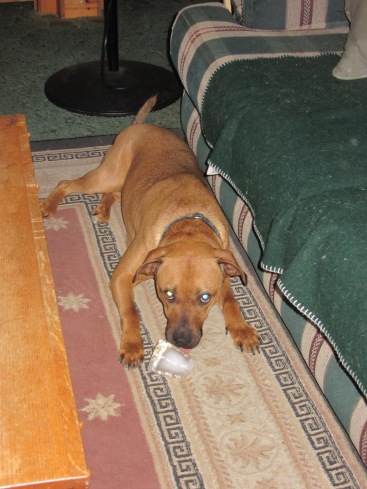 The Mama Turkey has been bringing her babies up near the driveway every day. They like to eat the grasshoppers. I’m glad because we have billions. Yesterday the Mama ate some of the berries from the bushes growing by the big rocks. I saw the family twice today. I’m not sure how many babies there are because they aren’t all in sight at the same time. I kind of don’t like to count them anyway because I know I will be sad if any go missing.

The lilies are blooming. Not that we get to enjoy many of them. We see a few here and there along the driveway but most of the time we find empty stalks where the deer have eaten the blooms. There are a lot of lilies in bloom near the big rocks. I think the deer must leave them along because the ones along the driveway are more accessible. Or maybe there are just so many lilies near the rocks that I don’t miss those they eat. 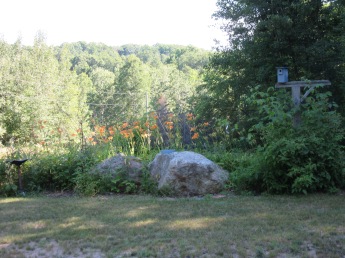 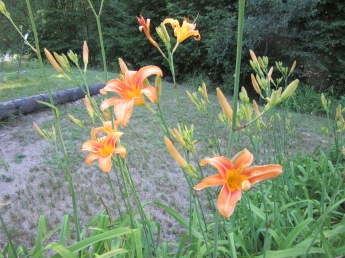 We can hear fireworks going off. EJ and I went outside to see if we could see any, but the trees block our view. Oh, well. Hannah barked a bit when she heard them, but she didn’t seem to be scared of them. Mostly she is just very protective. She notices every strange sound, every strange smell, every strange movement, and every stranger.