A Bit of Chaos 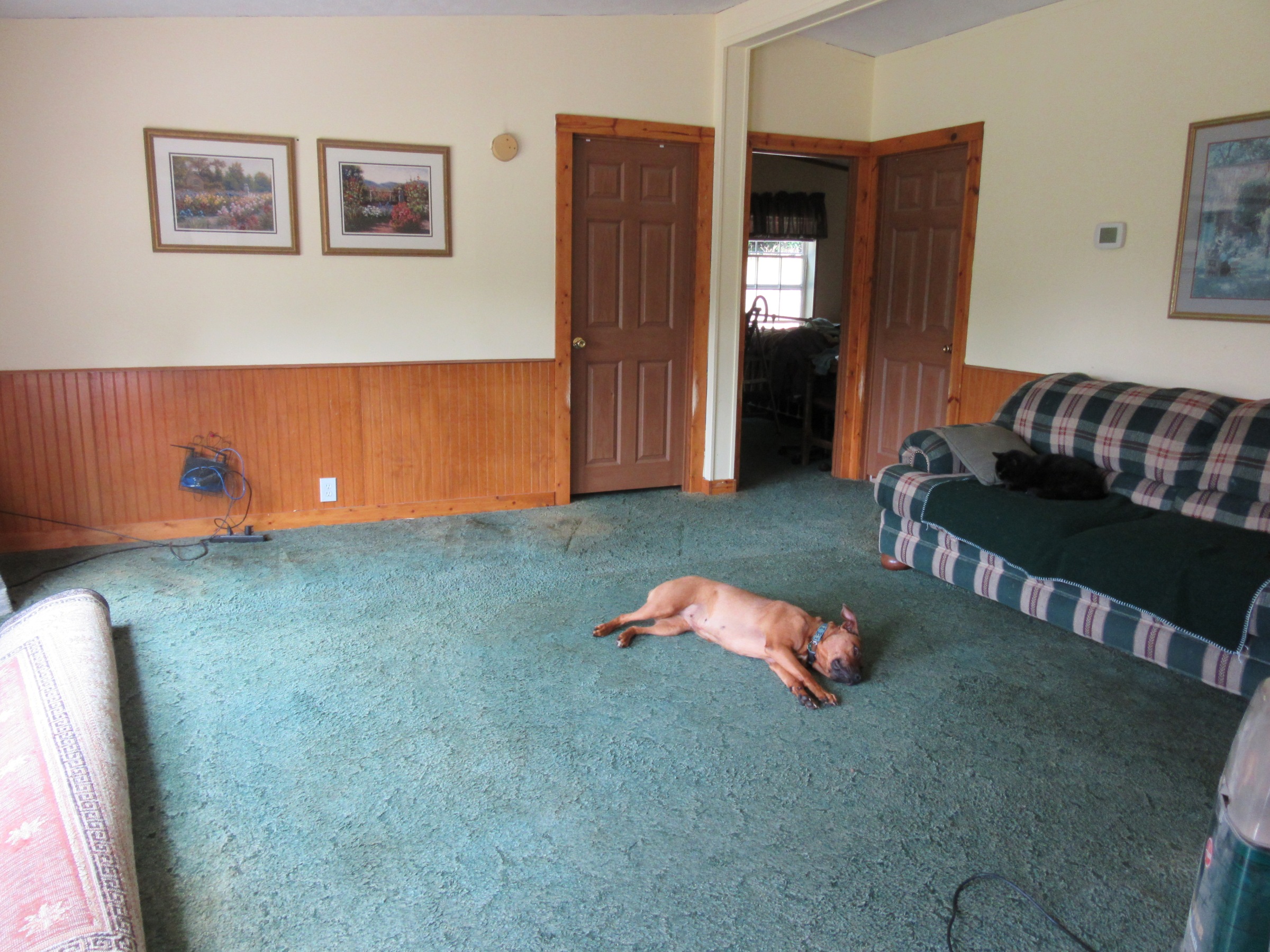 This week I have added preparing the living room for installing the new flooring to my list of tasks. We are removing the carpet ourselves because we want to fix any problems there might be before the installation people show up. We were told that the flooring would arrive at the store by the end of July–give or take a couple of days. We are having it delivered to our house.

For several weeks, I have been mentally thinking through where I would put the furniture when we emptied the room. I planned to put couch in the kitchen, which is the only room where it would have fit. However, yesterday I tried to move it and couldn’t fit it through the doorway. I think the only doorway it will go through is the outside door, which is how we originally got it into the house, and I certainly don’t want the couch outside where bugs–and possibly spiders–can get in it. So Plan B is that the couch remains in the living room and it will just have to be moved from one place to another as the floor is installed.

I moved a few living room items–such as the gas fireplace, a lamp, a coffee table, and a couple small tables–to other rooms yesterday but I didn’t want to move our recliners or anything until I discovered when the flooring would be delivered. No sense living crammed into the kitchen until we had to.

I found out this morning that the flooring will be delivered on August 2nd. So this morning I moved the rest of the furniture out of the living room–except for the couch. I put down the sides of our kitchen table, making it smaller, and moved it into the center of the kitchen. Then I moved our chairs and computers into the nook where the table usually sits. It’s actually quite cozy. With the furniture out of the living room, I rolled up the big rug and vacuumed the carpet. EJ and I hope to remove the carpet during the evenings this week, and fix any problems underneath this weekend. 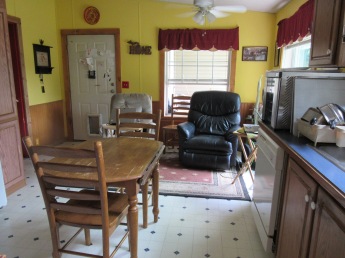 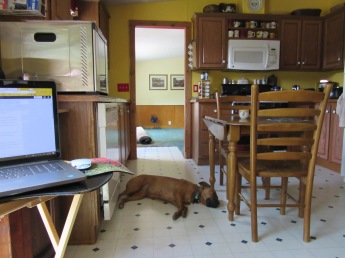 Originally, we had planned to removed the carpet this last weekend, which would have given us more time to get it done. However, instead we went to have lunch with EJ’s Mom and the sister who takes care of her. EJ’s Mom has dementia and is getting feeble, and we don’t know how much time she has left. She and the sister live at least a five-hour drive from us, but they were visiting family about 3 hours away from us, so we drove down to see her.

Last week leading up to the lunch visit was extremely, extremely stressful for us. We both could feel it affecting our health through insomnia and other issues. Two years ago, EJ’s siblings and their families discovered that we had very limited contact with their brother, who was manipulative and dishonest and tried to victim-groom our son when he was about 9 years old. As a group, most of them tried to pressure us (i.e., bully) to have contact with him and when we refused they insulted us, attempted to guilt and shame us into contact, and were very patronizing and condescending (which is a way of devaluing a person), self-righteous, and arrogant. I mention this not merely to complain but because I think it’s very important to understand. I hear the stories of too many people who are re-traumatized by the supporters and defenders of abusers (including us). They break my heart and make me upset that people do this.

There are two things that EJ and I firmly believe. First is that each adult has the right/freedom to make his/her own decisions for him/herself and his/her own family. They do NOT have the right to make decisions for other families. They must respect others’ freedom even if they disagree with the decisions being made. Second, while both EJ and I have deeply loved our families of origin, we will not accept, support, or stand with any person who is toxic/abusive even if he is family. Being “family” doesn’t mean an evil person gets a free pass. We absolutely will not tolerate or submit to bullying–especially when it comes to guarding our personal freedom and protecting our family.

In healthy families/groups, boundaries are respected and members are free to disagree and make their own decisions. Dysfunctional families/groups often claim to be loving, but in reality boundaries are often violated and anyone who doesn’t conform to the group is punished in some way. I believe that a person or group who tries to force a person into submission is attempting to take away their freedom. Free people have the right to make decisions and disagree. Slaves don’t.

In healthy families/groups people sincerely repent when an offense occurs (which means they apologize and seek to change), and the offense can be forgiven. In unhealthy families/groups, members are pressured to unconditionally forgive, reconcile, and have contact with a person even if he doesn’t repent of major wrongdoing. In fact, in most cases, members of a family, church, or other group rushes to protect and support an abusive person and fiercely condemns the innocent victim who speaks out against it or tries to escape. Often the family/group describe themselves as being caring and loving, and are proud of “giving grace” to the evil doer, but in reality, in protecting and supporting him, they are enabling and empowering him to hurt more people. This is wrong. VERY wrong. And despite their claims, it is not at all Biblical or Christlike. The Bible says that God is angry with the wicked every day, and that He will deliver the oppressed from their hand. And the Bible tells us to not walk with, stand with, or sit with the wicked, not associate with or even eat with them. It says to stay away from them and avoid them. Usually, a victim suffers from multiple abusers because she (or he) suffers from the original abuser and then she suffers secondary abuse from all the people who pressure her to unconditionally forgive, love, and accept the unrepentant abuser who continues to abuse and isn’t required to change. It’s very damaging.

Furthermore, I believe that those who stand with and enable abusers share in his/her guilt. An abuse advocate at FB shared a story this last weekend about a sweet 69-year-old woman who had confided in a few men from her church (which she had attended for decades) that she was leaving her abusive husband. She asked them to go with her to protect her because she was scared. They didn’t believe her because the husband had a persona of being a good, godly man. They refused to help her and she was found murdered the next day. This is heinous. You can watch the video here in which the advocate describes the story and the need to believe and help victims. Besides stories like this, there are many, many cases in which a victim is silenced, abuse is hidden or covered up, and the abusers are free to hurt others.

Anyway, EJ and I have always respected the freedom and boundaries of others, including our families. After struggling with the abuse of my family, and the secondary abuse of people who enabled them, we will no longer tolerate bullies or abusers. We have decided not to associate with those of EJ’s family who bullied us until they apologize to both of us and promise to respect our boundaries in the future. Many people would urge us to “to let it go” but we have learned that ignoring such things just result in more abuses. It’s better to set firm boundaries. EJ says his family will never apologize to us. So that’s that. There were a couple of relatives who supported us, and we will have contact with them but we will not go to large family events.

We were very stressed about meeting EJ’s Mom and sister on Sunday–primarily his sister because she actually was among those who felt we should have contact with their brother. However, we think she might not be in the same category as the others so we are willing to give her a chance. But since we were meeting at a restaurant in the town where many of the family lives, we were very anxious about the possibility of me being insulted (because I only married into the family so I’m not really “family”) or being ambushed by the others. Sometimes people think they are “helping” a situation by forcing a reconciliation. We were relieved that the time was pleasant, and the sister wasn’t mean to me, and EJ got to see his Mom once more. It was kind of hard because at first his Mom didn’t recognize him. She asked “Who are you?” and he had to remind her that he was her youngest son.

We were gone from home for about 8 hours. We’ve never left Hannah Joy alone that long and I was worried how she would handle it. She tends to get into trouble while we are away. I made sure the cats were shut into the pantry/hallway with the pet door shut so Hannah couldn’t mess with them if she got bored. We shut all the bedroom doors so Hannah could only get into the living room and kitchen. We made sure everything that she could possibly get into was put away. Everything was fine when we arrived home. Whew.

We got through the day. But we aren’t going to do this too many times. We have endured too many abusive people and the stress they cause is too much and too damaging to our health.

While I was writing this post, I received notification that a package had arrived. Since the delivery truck had not come up to the house, I knew that the package had been left at the Magic Box, which is what I named a large wooden box at the bottom of the driveway in which delivery people can put our packages. I call it the Magic Box because packages “magically” appear there. The delivery people actually are supposed to leave packages only in the winter when they don’t want to try to make it up our treacherous driveway, but they’ve been putting them in the Magic Box this summer as well. I walked Hannah down the driveway to retrieve the package and found it on top of the Magic Box instead of in it. Anyone pulling into our driveway could have seen and taken it. What part of in the box don’t they understand?? Grr. This sort of thing is why I rush down to the Magic Box as soon as I received a notification that a package has been delivered.