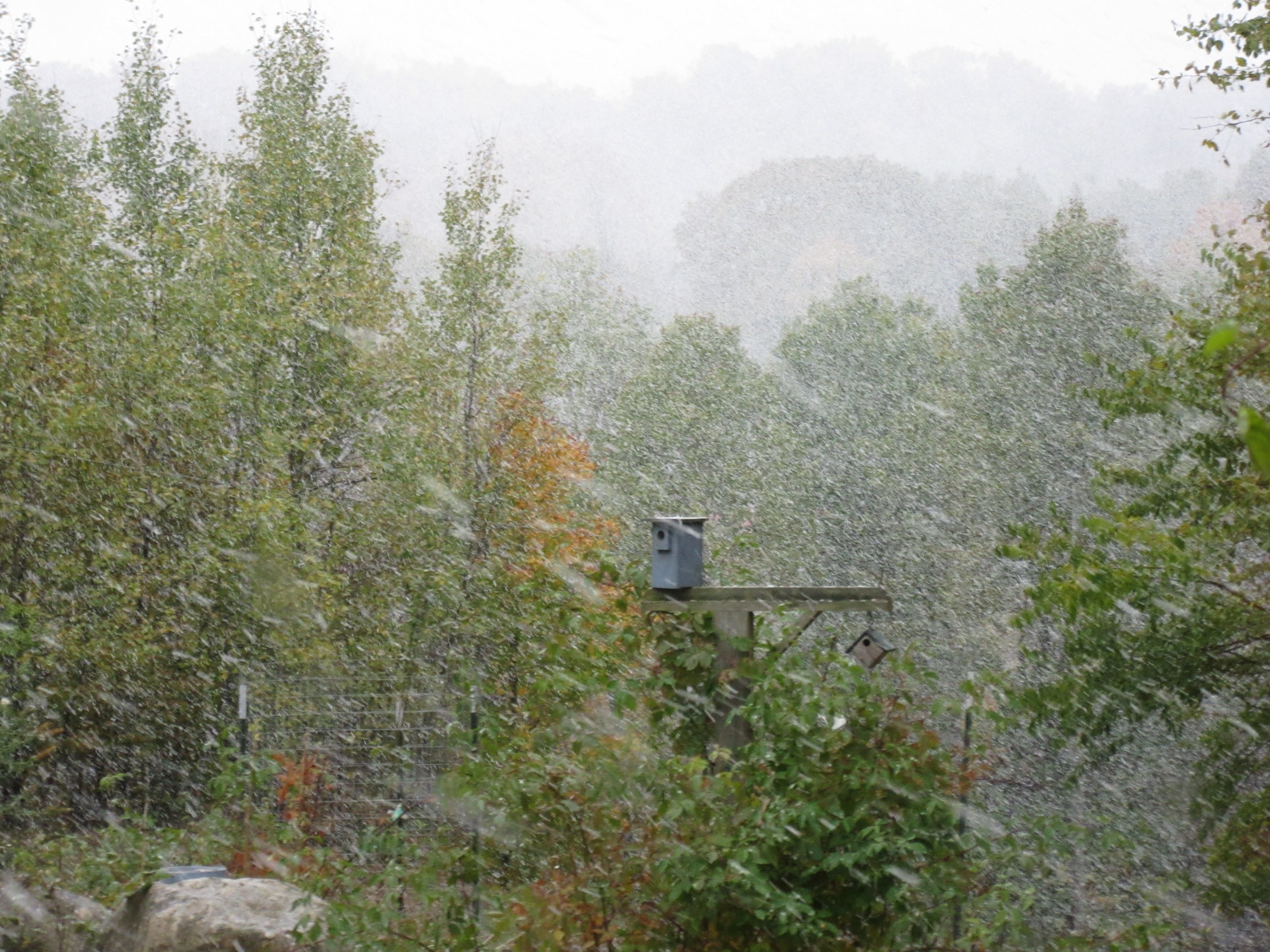 Wintumn–a word I invented to describe a mix of autumn and winter–continues with crazy weather. In the last week, we’ve had a day or two of sunshine and blue skies, but also days of rain and Lake Effect snow, and a slushy combination of the two. Most days it’s been windy and the leaves are flying off the trees. It won’t be long until the trees are bare. This was our snow on Wednesday:

Crazy, huh? Snow hasn’t yet stuck to the ground in our area, but that’s a’coming…I’ve heard that north of us in the Upper Peninsula they are an inch or so of snow today while downstate is getting thunderstorms.

Thursday I drove to TSC to buy poultry feed, dog food, and canned cat food. I put as many on the flat shopping cart as I could manage, which amounted to four 50 pound bags of poultry feed, two 55 pound bags of dog food, and three 32-can boxes of cat food. It was quite a workout loading it all onto the cart, then into the Xterra, and then unloading everything at home. I carried the dog food and cat food into the house and then I pulled all the bags of poultry feed into the wheelbarrow and pushed it over to the coop where I lugged it inside. Friday I scooped the poultry feed from the bags into the kitty litter buckets to keep the feed safe from hungry mice.

We are now all set on the dog food, but we need about two more boxes of canned cat food, a few more bags of poultry feed, and some bags of cracked corn for the chickens. If we stock up now, we won’t have to worry about running out in terrible winter weather. I’ve read that the corn raises the chickens’ body temperature and helps them keep warm. Plus, they really enjoy their cracked corn treat. EJ and I will run to TSC for these additional items tomorrow.

EJ’s friend had a meeting at our area of the state Thursday evening. After his meeting, he came over here and spent the night. It saved him from making the long-ish trip home. Hannah Joy was very excited about seeing her “favorite uncle.” When he visits, she sits as closely to him as she can get on the couch with a proud grin on her face, and she brings him her favorite balls so he can play with her.

Last night EJ, Hannah, and I all had a quiet evening watching The Closer on Amazon. I love this photo of Hannah fast asleep on EJ’s lap:

The sunrise was very beautiful this morning. I grabbed my camera and went outside to capture it. I love how the sun makes the trees blaze with color. 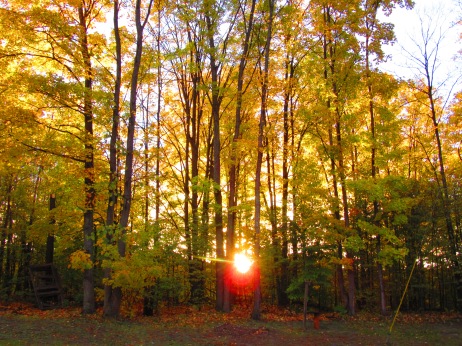 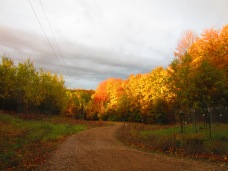 After EJ and I had slowly emptied a pot of coffee this morning, we got busy. We would prefer to have quiet, relaxing Saturdays, but we needed to buy another 40 pound bag of dry cat food and some more bales of straw from a feed store that is closed on Sundays. Usually we just buy four bales of straw, but I wanted to get as many as we could fit in the Suburban as we could so we don’t have to make any return trips. We weren’t sure if we could fit five or six in the Sub so I waited in the store while an EJ and an employee loaded in as many as they could. Then the employee came in and told the clerk how many we were buying–five–and I paid for our purchases. EJ said that they probably could have fit six in the Sub, but it was raining so they just threw the bales in as quickly as they could. The weather was so crazy today with downpours of rain that periodically became slushy snow.

On the way home, we stopped at Meijers to buy EJ knee braces to support his knees. They are giving him a bit of trouble.  We also wanted to buy a variety of nuts because they make healthy treats. That’s it. I had a coupon. I also had a coupon for a bag of rawhide bones for Hannah Joy. Going from one side of the store to the other, we came across a large jug of peanut oil for 50% off. I need peanut oil. A few more things found their way into our cart. I hate going to Meijers because we always seem to buy more than we intended. It’s all things I was intending to buy, but I wasn’t going to buy it NOW. This is why I prefer to shop at our little local grocery store.

It was still slushy rain-snowing when we arrived home so we grabbed the bags of groceries and left the cat food and straw bales in the Suburban to be unloaded tomorrow. I don’t want to risk getting the straw wet.

Last night I opened the door between the two halves of the chicken coop to let the old and new chickens mingle. I felt as if I was putting the new chickens into the general population of a prison where they would be bullied. I keep telling myself that it is normal for there to be bit of bullying when new chickens are added to a flock as their place in the pecking order is established. It is part of chicken society.  But still. I saw the new chickens outside this morning. Later in the afternoon when I went out to gather eggs, I saw the new chickens in “their” side of the coop while all the others were outside, but they didn’t look beat up so I think they will be ok.