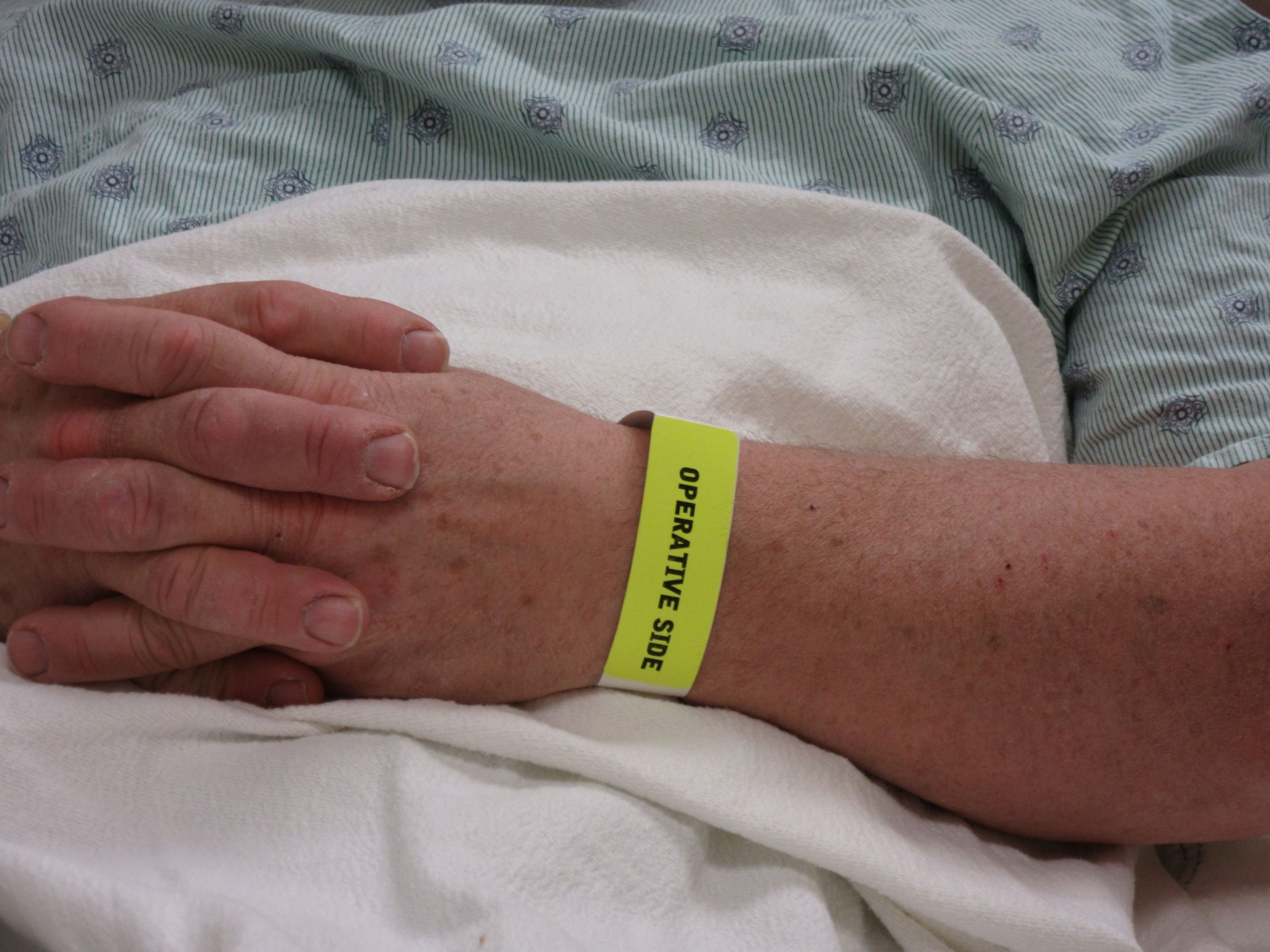 Last night was a very short night. Today was a long day.

The alarms on our phones went off at 3:30 a.m., which is the middle of the dang night. We staggered out of bed and rushed around getting ready to leave for the hospital for EJ’s surgery to remove the splinter in his hand. EJ took his shower first with the special soap he was given. After I showered I rushed to feed the pets and then took Hannah out before we left. We had to be at the hospital at 5:30 a.m. and his surgery was scheduled for 7:15 a.m.

EJ drove us to the hospital. I was very glad of this when just a few miles from home, two deer ran out into the road in front of us. EJ slammed on the breaks and missed the second deer by mere inches. He has Jedi reflexes; I probably wouldn’t have been able to stop in time. I thought, “Whew! Hitting the deer could have really complicated life even more than it already is!” We made it safely to the hospital with no other excitement.

Once at the hospital, all the normal routine hospital things happened:

EJ was taken away to get prepped for surgery while I waited in the waiting room. After a while I was taken back to stay with him while the doctor and the anesthesiologists came in to talk to him. One of the anesthesiologists was a little worried that the magnesium splinter in EJ’s hand would burst into flame when it was exposed to the oxygen-rich air in the operating room because he remembered a piece of magnesium exploding during an experiment when he had been in a chemistry class when he was younger. EJ reassured him that that wouldn’t be a problem but the anesthesiologist’s concerns caused me to imagine the magnesium splinter catching fire when EJ’s hand was cut open, and the whole operating room exploding. Of course, that didn’t happen.

EJ was wheeled away and I went back into the waiting room. The surgery took about an hour, and EJ was in recovery for another hour and a half. Fortunately, coffee was available in the waiting room. I had two large cups to keep me awake. After the surgery, I met with the doctor in a consultation room where he told me that the splinter had been lodged between a bone and a tendon, but everything went fine. I joked, “So the magnesium didn’t explode in the operating room?” The doctor took me seriously and declared, “That’s a myth. That’s fake news!” EJ worked with magnesium for years so I already knew about the properties of magnesium. 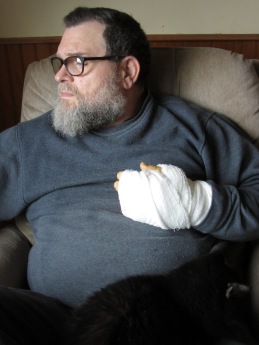 When EJ woke up after the surgery, I was taken to him. He had a large bandage on his hand. A male nurse was in the room when I arrived, taking EJ’s vital signs. When he finished, he explained to me how to care for EJ at home, and then told EJ that he could get dressed. The recovery room was small and the hospital bed blocked the door so it couldn’t close, so the nurse had to move the bed to reposition it and get the door closed.  He almost backed the bed into the Code Blue button on the wall, and we all laughed at the thought of medical staff all rushing to EJ’s room thinking he was having an emergency. As the nurse commented, it would have made a funny scene in a sitcom.

I was encouraged to go ahead to get our vehicle and drive it up to the entrance while EJ waited for someone to bring a wheelchair for him and wheel him out. The nurse walked out with me to point me towards the parking garage. I have very poor sense of direction–I can get lost ANYWHERE–so I was a little anxious about being able to find the Xterra in the maze, find the exit, and locate the correct place to pick up EJ. But I was successful in all three goals. EJ was loaded into the Xterra and I drove us home.

As we drove through the city streets, I was saddened when I saw a dead squirrel in the middle of the street. I hate seeing dead animals along the streets or roads. EJ reassured me that it was just a pile of autumn leaves, and that the death of the leaves had been quick and painless. 🙂

We arrived home at about 11 a.m. I immediately fixed us lunch because EJ hadn’t eaten since last night and I had only had a couple of slices of toast for breakfast. Although EJ was the one who had had the surgery, he had a lot more energy than I did. I was exhausted but I didn’t want to take a nap because I wanted to be able sleep tonight–so I dragged all day. I thought it was about 8 p.m. but when I looked at the clock it was only 1 p.m. The whole afternoon was like that.

EJ wanted to move our chairs so that I am next to the window and can enjoy the view better. So I moved our chairs. In the process, something went wonky with our internet. We put in for a service call, but EJ figured it was the result of the cable end being frayed where it went into the doohicky. Even though his hand is bandaged, he redid the end, and we were connected to the Internet again. Yay!

It has been a very, very long day. I feel as if we have lived through two days in one. I can’t wait until it’s late enough to go to bed.

← Very November
In This Liminal Space →