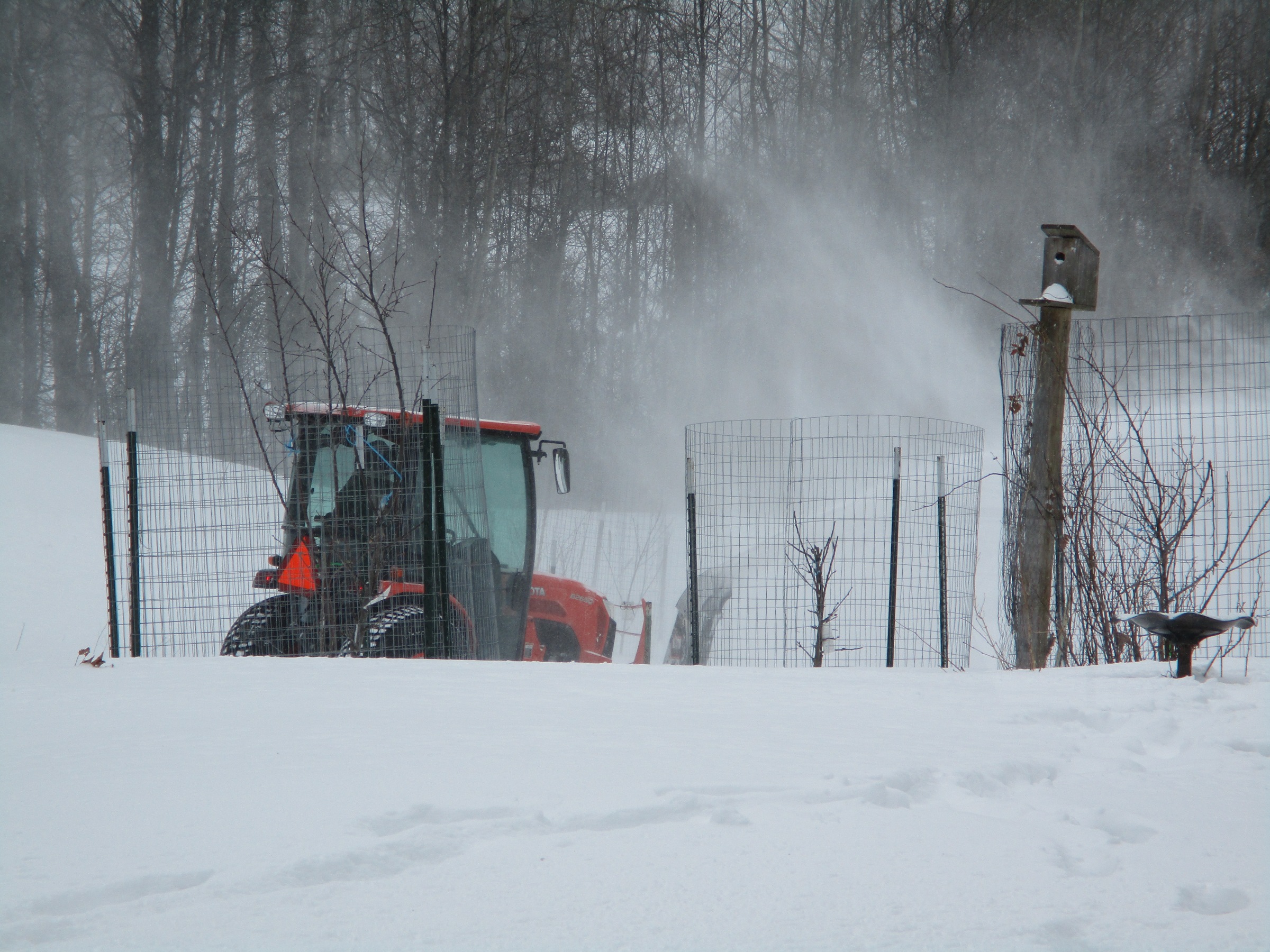 We sure had some crazy weather this last weekend.

Friday night it rained. I don’t know how much we actually got, but I read that we were supposed to get about a half-inch. Saturday morning it switched over to freezing rain, then to snow. In the afternoon the wind really picked up to around 35 mph with gusts over 50 mph. The strong winds blew through Saturday night and through Sunday. It was still quite windy today, but not as bad as the previous days.

The wind blew the snow into deep drifts. The freezing rain and drifted snow made travel hazardous and even impossible at times. Authorities were warning people to stay home unless it was absolutely necessary to travel. Snowplows focused on clearing only the main roads but even some major highways were shut down. The unplowed secondary roads were impassable. Many cars got stuck or were involved in accidents. This is a video that the County Road Commission shared at their Facebook page. They had to get out their big plows and graders to handle the snow:

During the weekend EJ and I sat safely in our cozy house and watched the wind sway the trees and blow the snow like ocean spray past our windows. EJ made preparations in case our power went out, but we never lost it, although many others did. The little town two miles away didn’t get power restored until this afternoon.

Before the blizzard hit, EJ had parked the suburban further down the driveway to give him a better chance of getting out for work this morning.  With all the drifting snow, however, he still wasn’t sure this morning if he would be able to get out. I watched him walk down through the deep snow to the Suburban this morning. He later told me that he had plowed through the snow like the Duke boys on the old TV series, The Dukes of Hazard.  He was able to get to work and home again safely.

Early this afternoon I went out to snowblow the driveway so EJ wouldn’t get stuck when he got home. EJ  had said that I didn’t have to do it at all, but he instructed that if I did, only do the very bottom of the driveway so he could park the Suburban. I was a little nervous because I had noticed thick ice under the snow when I walked down to get the mail. Ever since I fell on the ice last winter and broke my wrist, I get nervous when there is ice.

I got the snowblower out of the garage and started it up, but I noticed that it wasn’t blowing the snow. Sometimes the pins holding the blades get sheared off, which means that the blades don’t spin and blow away the snow. Apparently it’s an easy fix, but I don’t know how to do it so I have to wait for EJ to replace the pins. I was sighing with a bit of frustration because if I couldn’t clear the snow, there was a good chance EJ would get stuck in the driveway when he returned home, and then we’d be out there working in the cold and dark to get the Suburban unstuck.

I turned off the snowblower and was about to push it back into the garage when…what to my wondering eyes should appear? A large tractor-snowblower coming up the driveway blasting the snow away! My jaw dropped in amazement! I had to rub my eyes with my mittened hand to make sure it wasn’t a hallucination! It wasn’t!

I waited for the guy to reach the top of the driveway and went over to talk to him. He said that last week he saw me snowblowing when he was clearing a driveway down the road, and he thought I could use some help today. I thanked him profusely. The snow was so deep–with ice underneath–and it would have been an awful ordeal to clear even a little bit. When I stepped back, the man went back to work. In no time at all he had the whole driveway cleared and then he was gone like a masked Superhero. I don’t even know his name, but I assume he was a neighbor I haven’t yet met. Later, EJ was able to make it all the way up to the house with no problems. What a blessing!

Sunday EJ and I watched a few crows swooping past the windows to land down on the other side of the driveway, just below the hill. It was amazing watching them gliding so close to the house. I like crows. Today I saw a crow sitting on a power line post with something large in his mouth. Then he swooped down to the same place he had yesterday. I looked out the window and was able to glimpse a dark spot on the snow so I figured the crows were eating an animal carcass. After the Superhero with his powerful snowblower had disappeared in a cloud of snow, I went out to see what the thing was. It was flat and had the same coloring as Miss Madeline Meadows. Concerned, I went into the garage and looked in the warm house that EJ had made for the outside cats. Only Annie was in it and I didn’t see Madeline elsewhere in the garage. I opened the small garage door that has the pet door in it. The snow had drifted deeply and there were no cat tracks in the snow. So I deduced that Madeline had been killed, and that the swooping crows I had enjoyed watching had been eating her, which is rather sad to think about. I was a bit surprised that Madeline’s body was so quickly in the state I found it: flat and stiff like an animal hide. But who knows how quickly the cold, rain, ice, snow, wind, and eating crows could destroy a body?

Saturday evening when EJ and I took Hannah out, I noticed Hannah staring intently so I shone the flashlight and saw Madeline sitting on the rocks. She looked creepy, like a scary serial killer in the night. Today I thought sadly that I probably should have taken her to the garage then so she would have been safe. But, no, Madeline lets me give her lovings when I bring her food in the garage, but she is timid and runs away outside. She is totally an outside cat by nature and half feral. The animal shelter where we had adopted her had said that she had been returned twice because she was unhappy as a house cat. So I wouldn’t have been able to catch her even if I had tried.

When EJ got home tonight, I led him over to the body. He looked at it, poked it, and started laughing. “That’s not Madeline! That’s just an old piece of carpet from the Suburban that I used to try to get unstuck the other week.” It must have got flung into the snow when he spun the tires. “But why would crows take away pieces of old carpet?” I asked. EJ shrugged. “Who knows. Crows are intelligent so maybe they were playing with it. Or maybe using it for a nest or something.” But, whew, it wasn’t Madeline. She is a very intelligent cat and street (or forest) smart so she’s probably holed up somewhere safe. Or she is light enough that she could walk across the crusty snow to and from the garage without leaving tracks.