I’m a bit late, a week late, but I hope that everyone (in the USA) had a wonderful Memorial Day weekend and are enjoying the beginning of summer.

Summer is slow to reach us here in the north, but it is seeping in. We are still getting a few frost warnings at night, but the temperatures during the day fluctuate into the 50s, 60s, and 70s. In the last week, the leaves on the trees have been maturing so that the landscape is greener and greener. I actually like the “in-between” seasons of Spring and Autumn when it’s not too hot and not too cold.

Because of Memorial Day, EJ had a four-day weekend instead of three. (His normal workweek is four ten-hour days…er, nights.) EJ puttered in his garage most of Friday–and during the nights after I went to bed. (To make it easier on his body, EJ tries to keep to his workweek schedule on days’ off, so he stays up until 3:30 am, which is when he’d normally get home from work.) When I walked through his garage on my way out to the chicken coop to gather eggs, EJ showed me a gun he had been working on. “It shoots slugs,” he explained. EJ saw the look on my face and he exclaimed, “No, no! I do NOT shoot garden slugs with this gun!” which is exactly what I had been imagining. He tried again, “The gun shoots slugs instead of bullets.” Then he said, “Get that look off your face! Garden slugs do not get shot out of the gun!” which is the second thing I was imagining. EJ knows too well how my imagination works. We had a good laugh.

Saturday EJ and I had a quiet, restful day. We enjoyed watching the birds outside our windows. EJ had seen a hummingbird or two zooming past our window, so he asked me to hang out the hummingbird feeders. I asked, “What about attracting bears?” I had carefully put away the birdfeeders every Spring so they wouldn’t attract hungry bears. We have heard reports of bears in the area but have never seen any, so EJ said, “Let’s just put them out.” So EJ made nectar (without red dye) while I dug out the hummingbird feeders. Since we had decided to disregard bears and put out the feeders for the hummingbirds and oranges for the Orioles, I decided to put out a scoop of seed for the other birds.

It will be interesting to see what Spring birds will be attracted to our feeders. Even before I put the seed out, we had brief visits from Rose-breasted Grosbeaks. And I saw a Scarlet Tanager at the edge of the forest. It was exciting because it was the first time I’ve ever seen one! I ran and grabbed my camera, but as I clicked the camera’s button, it moved behind a branch and then it was gone. This is the only photo I was able to get. 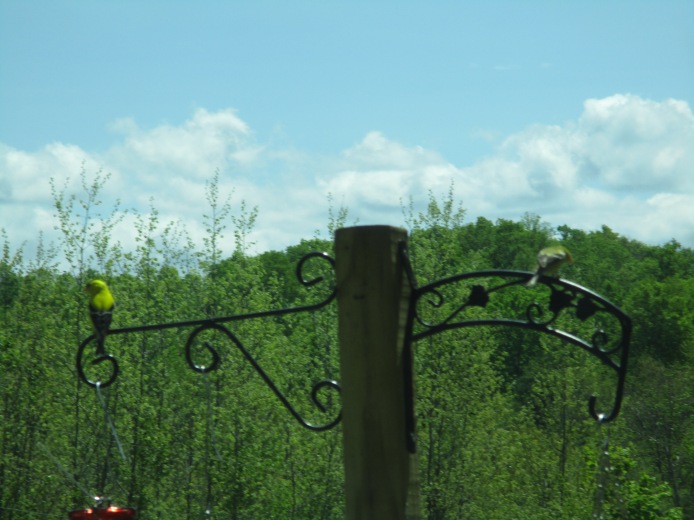 Last Sunday was a busy day of tasks. I hung clothes out on the clothesline, mowed the lawn, and cleaned the house. My best customer stopped in to pick up the wizard and unicorn I had made. She lives in a nearby town whose school mascot is a dragon so she ordered a Chinese dragon made in the school colors. She also asked me to make her an afghan made with Jackfield Tiles. She said it reminded her of the embroidery her mother used to do. I made sure she liked the colors of the sample squares I had made for her. I made one with a yellow center and one with a pink center. She liked them both so I’m going to use both in the afghan. I’ve been working on the squares all week. 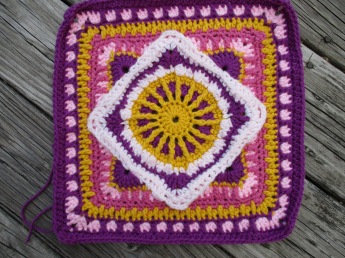 Sunday afternoon, EJ and I worked in the garden. I helped EJ a little with digging the rows and planting the corn, but EJ did most of it. After the corn was planted, I went into the house to crochet while he planted more seeds. He also worked in the garden most of Memorial Day.

Now it’s another weekend. Yesterday we drove to Lake Leelanau to pick up a treadmill that someone had listed for free at Facebook Marketplace. The Leelanau Peninsula is a beautiful drive along the lake and through forests and blooming cherry orchards. We took the Suburban and I stayed in it while EJ and the man loaded the treadmill because the Suburban door doesn’t open and I have to climb over the driver’s seat to get in and out. The owner lives on a small hobby farm. I saw horses and several dogs. He told EJ that one of his dogs insisted on going on a one-mile walk every day. The dog knows when they have walked a mile and complains if the man tries to walk less. I love hearing stories like these.

When we got home, there was a package waiting for us, sent from my friend in Texas. It was filled with treasures: seashells and sea glass she had picked up on walks along the Gulf and a half package of wildflower seeds with a note, “I  planted some of these in my yard. Now we can grow the same flowers.” A year or so ago, I had sent my friend a Petoskey Stone, and products made in Michigan, such as cherry fudge, cherry salsa, cherry jam, and other stuff. I also am accumulating baby food jars filled with sand taken from along Lake Michigan and Lake Huron, and Kalkaska Sand which is Michigan’s official state soil. We both love gardening, birding, and hunting for rocks or shells as we walk along our beaches–and sharing these simple treasures. My friend also sent me seashells, dirt, and a variety of other treasures from Thailand, where her daughter had lived for a couple of years. My friend always covers the boxes or envelopes she sends with lots of stickers, which is fun. 🙂

I haven’t seen Miss Madeline Meadows, our sweet serial killer cat, for several days now. I fear that she has become a victim of a larger predator–although there have been other times she has disappeared for several days and then returned. Madeline is an independent cat, mostly feral, and unhappy living in a house. The animal shelter where we had adopted her said she had been returned twice because she was too shy and not cuddly enough. We feed her, gave her a warm place to sleep, and let her be what she is.

Today is a cloudy day. Part of it might be clouds moving in, but part of it is definitely smoke from huge fires in Canada, or so the meteorologists are saying. Once again, we are enjoying a quiet day of watching the birds.