I thought I better write early today because the weather is messy today with rain, snow, and high wind in the forecast and it’s always possible under such conditions that we could lose our power. It is snowing as I write this. With the wind blowing it in swirls, it reminds me of Vincent Van Gogh’s “Starry Night.”

It’s not always easy to comprehend that in the southern USA, people are experiencing 80+ (F) degree weather, flowers, and growing gardens.

Our governor’s new “Stay at Home” orders seem random, arbitrary, and often nonsensical. Motorboating and jet skiing are now off-limits, but canoeing and kayaking aren’t. Even though canoeing and kayaking are allowed, the Department of Natural Resources is removing docks at boat launches. Supposedly, motorboats and jetskis aren’t allowed because they require gas and the virus can be spread at gas pumps, but if people must already go to gas stations to fill up their vehicles anyway, I don’t see the problem with them also filling up their boats while they are there. Some items in a store are deemed “essential” and others are not and can’t be bought. I think that either a business is “essential” or not, either it’s open or closed, but once you start making decisions about which items can be bought or not, it gets crazy.  Who gets to judge whether or not an item is essential? For example, shoes might be a luxury for some people, but a necessity for others if their shoes are worn out or outgrown.

A friend wrote that “Big stores are open. Horrocks [a farm market-type store] in Lansing had cops called for selling flats of vegetables. Cut flowers are ok. Spa, where service is clean and changed between clients, are closed. Lottery line is fine. Golf outdoors is closed, home depo is ok.” Huh? Lottery tickets and cut flowers are ok but not vegetable plants? Why prohibit people from buying plants? It hurts farm/nursery businesses (i.e., livelihoods) to not be able to sell plants. And if people can’t plant gardens, they will be forced to buy food from stores, which will cause MORE interactions (less social distancing). Planting gardens would also put less strain on stores, which already are having trouble keeping shelves stocked.

I remember hearing a radio interview with an educator years ago. She said that we must always remember to ask “What’s the point?” She used an example of teachers instructing children to use different colored folders for each subject to help them keep organized. She said, “Don’t force a child to use the colored folders if he/she doesn’t want to use them and is able to keep organized without them. Don’t forget to keep in mind that ‘the point’ is not the colored folders but organization.” In a similar way, the point during our current crises is not to simply ban items but to maintain “social distancing” to prevent the spread of the Covid-19 virus. People aren’t going to have less social distancing because they are in the garden center rather than in the grocery area of an opened store so why not allow people to buy whatever they need while in that store?

Anyway, our soil is mostly sand so we need to buy dirt for our raised garden beds. Not knowing which items are going to be difficult to find or are going to be considered “non-essential” and banned, EJ and I decided to buy bags of dirt on Friday.  We usually buy it at Meijers, where it is very inexpensive, but EJ’s co-workers told him that Meijers is now limiting the number of people allowed in the store, and people are allowed in the store only for 15 minutes at a time. We didn’t want to deal with long lines, so we tried to order the dirt on-line and then go pick it up. That went fine except we had to schedule a time for pick up when we ordered and every time was “unavailable” so the order wouldn’t go through. We finally discovered that dirt was on sale at Tractor Supply. It was a little more expensive, but at least EJ was able to go buy it. He is our family’s “designated shopper.”

We’ve ordered seeds online while we can still find them. No use buying dirt if we don’t have anything to plant. 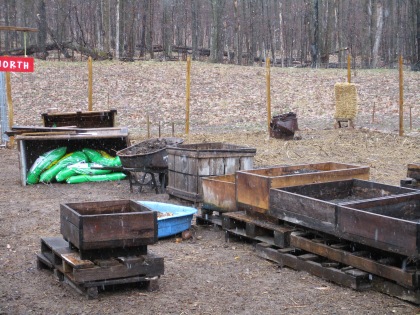 Saturday we rested. Sunday EJ unloaded our ten bags of dirt and carried them into the garden. He put them in boxes that were turned on their sides to keep them out of the weather. Mostly. Maybe next weekend we will fill the garden boxes. EJ ended up going to a grocery store in a nearby town to pick up a few things. We usually don’t shop at that store, but we didn’t want to go to Meijers and our little grocery store that’s just a couple miles away was closed for Easter. He was able to get almost everything on our list.

While EJ was gone, I did dishes, gathered eggs, and shoveled the dirt out of one of our “kiddie pool” compost piles so I could move it into the chicken pen. The chickens eat kitchen scraps and what they don’t eat they scratch up and break down faster. Once we plant our garden, we don’t allow the chickens in it because they would eat everything. Even when they aren’t allowed in the garden, they still have a large outside pen to enjoy.

Hannah Joy apparently wanted to get in on the gardening. She likes to be outside with us so I fastened her leash to a t-post while we went around the corner of our house to look at the garden for a couple minutes. When we returned, we found her in one of the boxes near the deck, which I use for my herbs. I am not sure why she did this. 😀 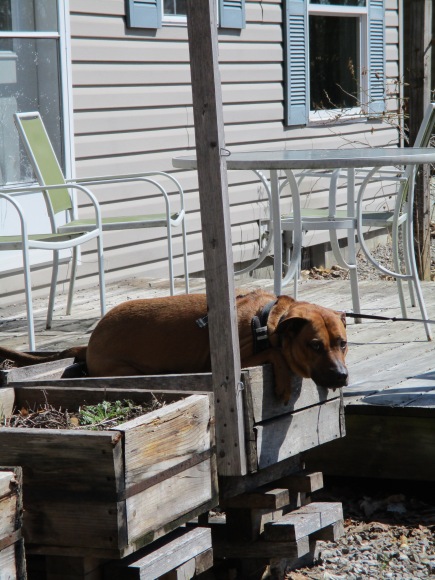 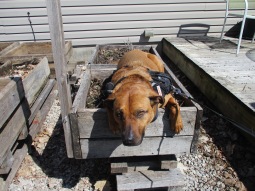 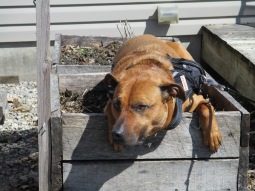 Hannah Joy was in a complaining mood yesterday. I don’t know if she was jealous because Little Bear was on my lap, if she wanted me to retrieve her ball for her, or if she wanted outside. She didn’t say. She can’t blame it on the “Stay at Home” order since her life hasn’t changed any.