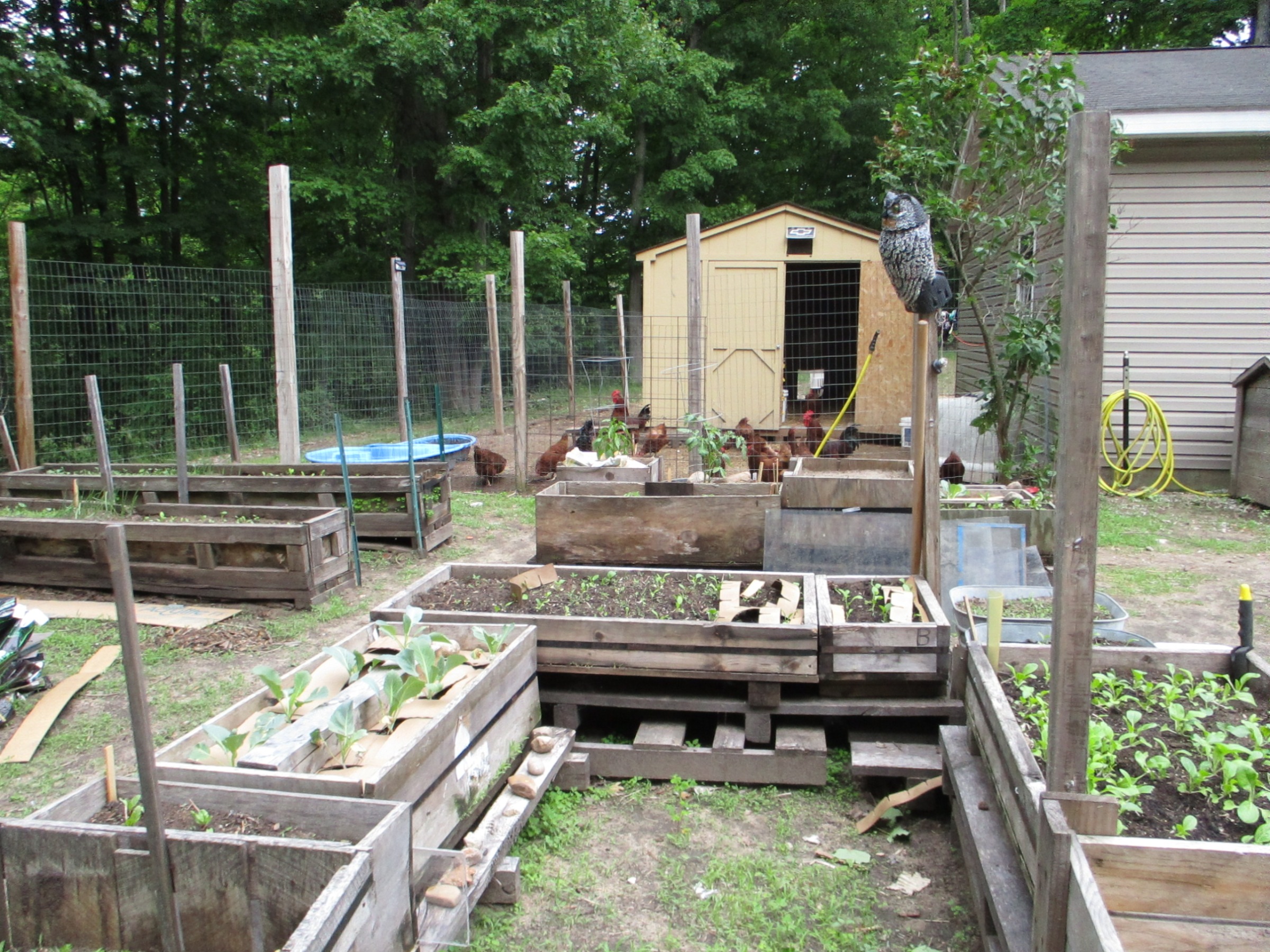 The world is going crazy, but our little Enchanted Forest is still gentle and peaceful.

Mostly. The building is still going on at our neighbors but it’s not terribly noisy. I thought at first they were building a house, but now it looks to me more like a huge outbuilding. Is it for their “toys”? A business? I don’t know. I don’t spy on them–I’ve never been a “spy on the neighbors” type of person–but I can glimpse the building through a gap in the trees when I walk down to get the mail and I can’t help but be curious. I’m hoping they won’t be loud neighbors who scare away the wildlife.

We had some hot sweltering weather with temperatures reaching into the high 80s and low 90s. But Tuesday night storm rolled in with rain and high winds, which knocked out our Internet all day yesterday. It was a little difficult not to be able to communicate with friends or know what was happening in the world. I told EJ that for all we knew, we could be the only two people left on the planet. How ever did we manage to survive before the Internet??

Without an Internet connection, I mowed the lawn. We only have a push mower and I get overheated so I have to take several breaks in front of the fan to cool off. I got most of it finished before ore rain rolled in and I had to stop. About 7:30 pm, I went out to finish the rest of it. I had to rush to finish before it rained again. It was sprinkling harder and harder as I finished the last of it.

I put the mower back in the garage and shut the door. Both Theo and Millie, our outdoor cats were in the garage put them out. I felt bad because it was raining harder, so I called them into the coop. The chickens were all in so I thought I could shut them in early for the night–appealing since radar showed a lot more rain coming our way. However,  before I could shut the doors, several chickens went outside. Some came back in but more went out so I finally gave up, but then I discovered that I had left the gate open and a rooster and three hens were in the garden. It’s difficult to herd chickens, but I finally got them all on their side of the fence. By that time, it was raining harder and I was drenched. I ran into the house and changed my clothes. Later, at the regular time, I went out to the coop and shut everyone in. At twilight, the chickens all go in and quietly roost. It’s only difficult when I try to get them in the coop before they are ready to go.

While I was out mowing the lawn, I got bitten by something–biting flies, I think. I have a big boil-sized bite under my right eye, and my ears are swollen and itchy. The itching is very annoying, to say the least, even when I put lotion on them. Stupid bugs.

Millie and Theo have been earning their keep. I’ve seen Millie with a couple little snakes, as I’ve written in previous posts. Theo tends to go after rodents. I’ve seen him with mice and chipmunks. The other day I saw him run past the front of the house with a chipmunk. He usually takes his kills to the wooden dog house in the garden, but I didn’t see any dead bodies when I went out to the garden a few minutes later. When I went out to gather eggs an hour or so later, he came running up with a chipmunk in his mouth…the same one? He dropped it near the chicken pen fence and it scurried around and ran up on top of Millie, who was sitting there. Then it must have realized it was on a CAT because it leaped down and ran into the chicken pen. Chickens go after rodents so I expected a brouhaha, but they didn’t see the chipmunk. It must have run under the coop and escaped.

EJ’s vegetable garden is growing very well. I feel as if my herb garden is growing mostly weeds. I always by herb plants, but this year I bought seeds because of the Lockdowns. I don’t do so well with seeds. My chives came back from last year, and the basil is doing well and dill seems to be doing well but other than that, not so good. Eric was able to find thyme and parsley plants at the store, but nothing else. I’m hoping that everything else is just slow-growing, but I’m not holding my breath.

The storms brought in cooler weather. The high was 72 degrees today with a nice cool breeze. The high temperatures for the next several days will range from the high 50s to low 70s and the low temps will be in the 40s. I told EJ that I wouldn’t mind if the weather stayed like this forever.

← The Snake Hunter
An Evening View →