I woke up this morning when I smelled the coffee. EJ had gotten up before me and made a pot and the aroma wafted all the way upstairs. By the time I got downstairs–before 7 a.m.–EJ was falling asleep in his chair. He works second shift so “before 7 a.m.” is much too early for him.

I poured a cup of coffee, checked FB, poured more coffee, and started some laundry. I thought that I would dry the clothes on the clothesline for the first time this summer. Usually I always use the clothesline during the summer but this year either it was raining, or I didn’t have time, or I just felt too tired to lug baskets of wet clothes out to the back yard. But the weather was beautiful and it felt like the perfect morning to hang clothes. I ran into a snag when I stopped the washer to add another pair of jeans and then couldn’t get the newfangled computerized machine to start again. EJ got it started for me an hour or two later by unplugging it and then plugging it back in–sort of like rebooting a computer–so eventually I was able to wash the clothes and then hang them outside to dry. A couple of years ago EJ installed a retractable clothesline for me that we can pull out when we need to use it and then retract it when we don’t. It’s very handy. 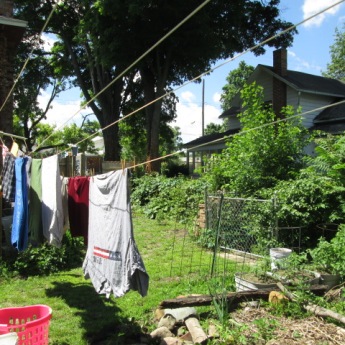 Drying clothes on the clothesline.

Anyway, when I couldn’t get the washer started, I poured another cup of coffee, grabbed a book and my camera, and went out to sit at the patio table on the front porch so I wouldn’t interrupt EJ’s sleep. I tried to sit very still so the wildlife wouldn’t be startled. I enjoyed the wren’s beautiful song and watched it go in and out of the birdhouse near the east kitchen window, which is close to the front porch. The sparrows haven’t thrown the wren out of this house yet.

I also saw a baby squirrel eating seeds from the large tray feeder by the pine tree. It was very cute and small–maybe a third of the size of an adult squirrel. I took a picture of it and then watched it for a while. Then I heard EJ stirring so I went inside and made him a delicious pancake breakfast. I sort of lost track of what I was doing and made the pancake too big. EJ said, “No pancake is ever too big!” but when he saw it he agreed that, yes, a pancake can be too big. With a breakfast like that, he didn’t need to eat any lunch.

This afternoon I went outside and discovered Annie with a little sparrow in her mouth. I’m assuming it was a fledgling bird on its first flight. We have three outside cats. Rikki-Tikki-Tabby and Tesla are too old to be interested in birds, but Annie is still young enough to go after them. I was horrified. I rescued the little sparrow from her jaws. It was still breathing, but it had a puncture wound in its neck. It kept very still and I didn’t know if it was just very scared or was near death. I held it gently while I tried to decide what to do. I didn’t have a way to care for it and I didn’t want to put it where Annie could reach it. I tried to put it on a branch in the wild rose bush, but it was too scared/weak to grab the bush. Finally I decided to put it in the tray feeder—the one the baby squirrel had been eating from earlier this morning. Annie couldn’t reach it there and it would not be able to fall out. I went out and checked the tray a little bit later and it was empty so I think the bird was not seriously wounded and just needed time to recover. Yay! I did not get a picture of the little bird. I was too busy rescuing it.

In between bringing the dried clothes inside and rescuing the baby bird, I sat down at my laptop. I turned it on and it stayed on for about two seconds and then shut down. I turned it on again–several times–and each time it flickered on and then shut itself off. Oh, no! A major catastrophe! I was afraid something very major was wrong with the computer. I finally searched the Internet using EJ’s laptop and found a Youtube video that said that this problem could be caused by a dirty fan. It showed how to blow the dust out of the laptop using a straw. JJ blew the dust out with his can of compressed air instead. Then we turned on the computer and “Voila!” it worked!

This is the third “problem” today that was resolved: First the washer, then the baby bird, and now my computer. Yay!

JJ suggested that I defrag my laptop, so while it was defragging, I watched live-streaming coverage of tornado chasers on EJ’s computer. There are very bad storms in the plains today. I watched two tornadoes as they caused massive destruction in Pilgner, Nebraska. Almost every building in town was destroyed. Later I watched other tornadoes form. I like storms–I think they have a very powerful and interesting beauty–but I don’t like when they are destructive. It seemed particularly sad to see the tornadoes in real time. That was one “problem” today that was not resolved happily.