The day JJ had his CT scan, he felt progressively more sick–nauseous and so cold that I fixed a hot water bottle to warm him. We felt our memories yanked back to the weeks in which we all dozed downstairs to be available to help JJ through the nausea of chemo. I didn’t remember the barium shake affecting him so badly, but JJ said that he thinks that it did but its effects blended into the nausea of chemo so we didn’t really notice. JJ was up most of that night and finally went to bed shortly before I woke up. So EJ and I said the Rosh Hashanah blessings without him on Friday morning and ate some of the special Challah bread. The beautiful bread, stuffed with apples, raisins, honey, and cinnamon was utterly delicious.

In addition to feeling sick from the barium, JJ has been struggling with some sort of cold or respiratory infection. I’m struggling with one too, and keep sniffling and sneezing.

One of EJ’s sister’s asked if she and her husband could visit on Saturday. They have wanted to visit for several weeks, but they have had to wait for a day when both their schedules were free and the weather was nice since they were planning to fly down in their little airplane. They live more than 3 hours north of us, but in their airplane it takes only an hour, more or less, depending on whether the wind is with or against them.

On Friday I cleaned the house and mowed the lawn so both would look nice,  and since I think it always tastes better on the second day, I also made a pot of chili to serve our guests.  On Saturday morning, I woke JJ up at 11 a.m., as he requested, and he took a shower and got dressed while EJ and I drove to the small airport about 30 minutes away to pick up his sister and her husband. We had a really nice visit. C. brought EJ a box of childhood keepsakes. Their Dad died in 2010 and their Mom lives with another sister, so they’ve been cleaning out the old farmhouse. Our guests really liked my chili, saying that it was the best chili they have ever had. This is very high praise since R. is originally from Texas where they take chili seriously. After several hours, we drove our guests back to the airport and watched as they took off. Before they left, they said they hope to visit again. It’s cheaper and quicker for them to visit in their airplane.

Later that night, EJ and I went outside to see if we could see any northern lights. The night sky was clear and quite beautiful, but I think we see fewer stars then we did when we were growing up because of increased light pollution. We’d like to move further north someday where there are fewer people and darker skies.

When we came outside, I heard a cat meowing outside. I thought it was an outside cat, but EJ exclaimed, “That is Little Bear!” We rushed outside and I was able to find Little Bear, even though he is a black cat who blends into a black night. Several weeks ago, Little Bear accidentally got outside where he discovered a whole new world. Since then, he escapes whenever the door is not latched securely. I explained to him last night when I carried him back inside that it really is a dangerous time of year for a black cat to be outside. As Halloween grows closer, black cats are not safe. Little Bear didn’t care. He scratched at the door and cried for a while. 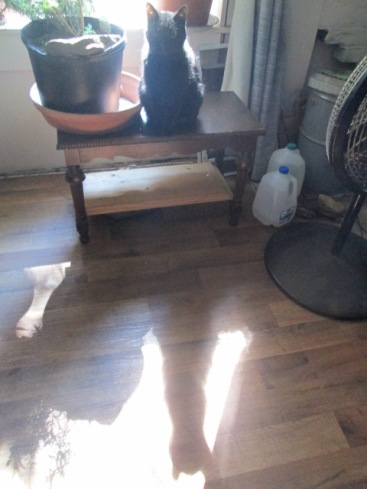 I noticed the cat’s shadow on the floor

Shadow in black and white

Today was another beautiful day. EJ and I were going to put the heavy plastic up to protect the firewood from the weather. However, when we went outside EJ saw many bumblebees buzzing around the berry bushes bordering one side of the woodshed so we decided it might be better to do the task on a cooler day when the bees aren’t active.

Instead, we went to the hardware store so EJ could buy things he needed for various projects he wants to do. Then we stopped at the grocery store to take back some empty bottles that have been rattling around in the car. A boy scout was selling popcorn in the entrance area of the store to raise money for his troop. We didn’t buy any because it really is very expensive but EJ paused to call a co-worker who had asked EJ to inform him if he noticed Scouts selling popcorn. While EJ was making the call, I went into the little room off the entrance where the bottle return machines are. I put in all the plastic bottles and then moved over to the machine that takes glass bottles. I put a bottle in the machine and heard a CRASH of breaking glass. I thought the bottles were breaking against bottles already in the bin on the other side. We don’t drink much pop (i.e., soda) so I rarely have a reason to use the machines. I put in another bottle as EJ came into the room. CRASH. EJ started laughing. I put in a third bottle. CRASH. “What are you doing??? The bottles are breaking!” He bent over laughing. “Not my problem,” I said as I put another bottle in the machine. CRASH! “TJ, stop it! You can’t do that!”  EJ was laughing so hard he could barely stand. I put in another bottle. CRASH. “TJ! There is no bin on the other side! The bottles are falling and breaking on the floor!” “Seriously? Oh, I didn’t know that. Oops!” I stopped inserting bottles and he took the remainder out to the car to return later. In my defense, I have been feeling sicker as the day went on, with my head getting foggier and more achy. I thought the glasses were breaking against each other. EJ laughed all the way home. I haven’t heard him laugh so hard in a very long time. I told him it was worth it just to hear him laugh so hard.

When we got home, I warmed up yesterday’s chili for lunch. Then I curled up on the couch and dozed for a bit while EJ worked on some of his projects. When I got back up, he felt my head and said I was feverish. He poured me a dose of Nyquil and then walked to the little store to get me some cough drops.

2 Comments on “Visitation From Above”