I spent Wednesday and Thursday afternoons in the kitchen. Wednesday I made two homemade potpies from leftover chicken. After I made them, I realized that I had enough chicken for a couple more pot pies so I made two more yesterday, which I froze for future meals. Homemade potpie is one of my favorite meals. I knew that we’d be busy this morning, so yesterday I also made homemade pizza and Challah bread. I made four loaves of round Challah bread and froze two for next week.

This morning we drove to the Cancer Center so JJ could have his port flushed. The port will not be removed until about a year after treatment ended to make sure it’s not needed. It has to be flushed every 6-8 weeks or so. JJ enjoys seeing the oncology staff, but he hates going to the infusion center. Sitting in the infusion chair and seeing all the other cancer patience receiving chemo feels to him like being sucked back into a nightmare.

But other than the nightmare aspect of it all, we had an enjoyable driving to and from the Cancer Center in the beautiful autumn. It’s rained all day, sometimes hard. In a nearby town, we passed many airstreams parked along the main street. The story I’ve heard is that a couple of years ago a few airstreamers parked along main street for the night. They received such a warm welcome from passersby that they and several more returned the next year. Word got around, and it’s become an annual event for a group of airstreamers to come to town at this time of year. They stay for the weekend and let people tour their RVs. We were planning to tour the airstreams last year but couldn’t because JJ had just been diagnosed with cancer and was having surgery that weekend. This year we hoped to go, but JJ had to have his port flushed and he just wanted to get home afterwards. Besides, it was pouring rain. Maybe someday we will get to go see the airstreams. Even though we couldn’t tour them, we enjoyed seeing them as we drove through town. I took a video of them:

On the way home, we made a brief stop at the grocery store and I dashed into it to buy flour and shortening because my baking frenzy had exhausted my supply. After EJ left for work, I made homemade bread. As it was rising, I paid bills and then took Danny for a walk to mail them and to return a library book. As soon as Danny saw me put my shoes on, he got excited. It was raining harder than I thought, but I couldn’t disappoint my expectant dog, so I just grabbed an umbrella and went on the walk despite the rain. It was quite a rainy walk, but I sort of like walking in the rain. Although Danny got quite wet and now smells like wet dog.

We’ve had some really enjoyable sunshiny walks earlier in the week. One day EJ, Danny, and I went a little ways out into the countryside and we saw a fox chase its prey across the road. EJ thought the fox might have been after a chipmunk. We have quite a few foxes in our area but we don’t often seen them so it’s always a thrill. Another day Danny and I walked out into the countryside and I looked up and saw walnuts hanging from a tree like decorations. I also saw two woodpeckers fighting. I think they were pilated woodpeckers. I got out my bird book when I got home, but whenever I see all the pictures of similar looking birds, I tend to forget exactly what the birds I saw looked like. But I think I saw pilated woodpeckers.  I did try to take pictures of them, but Danny kept jiggling my arm so I kept losing my focus on the birds and wasn’t able to get a picture. Another day I saw groups of interesting mushrooms that I’ve never seen before. I managed to take a few pictures even though, again, Danny kept jiggling my arm. 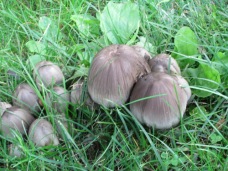 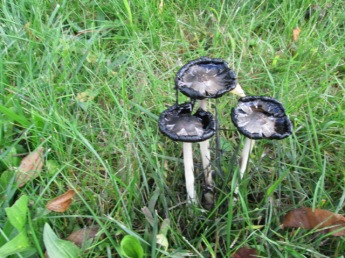 The rest of this rainy Friday I will be doing laundry.

4 Comments on “Autumn Walks and Drives”