My birthday is next week. The gift I usually ask for is a memory-making experience. We usually celebrate the weekend preceding my birthday and in the past we have gone to wild bird sanctuaries or cider mills or simply on drives through the beautiful autumn countryside.

This year I was looking forward to going on a drive through the beautiful North country and stopping at whatever places looked beautiful, interesting, quaint, or fun. EJ’s and JJ’s work schedule are rarely the same. EJ usually works four ten-hour days and then has Friday, Saturday, and Sunday off. JJ rarely has the weekend off, but this week his day off was today, Friday, which would have been perfect except this week EJ has to work Friday and Saturday. This means there is no day in which we can all go adventuring together. Bummer. Since I can’t have both guys with me on the same day and today is the only day JJ can celebrate with me, we decided to celebrate my birthday together by going to a matinée movie at the theater in Storybrooke.

We arrived in Storybrooke much too early so we went to an antique store nearby. It was an old building filled with rooms and nooks and crannies cluttered with all sort of interesting things. We could have gotten lost in it for hours or days or maybe even weeks, but we spent only a few minutes wandering through it, just to get a feel for it. JJ said it felt like something out of the Harry Potter world.

At the antique shop, I saw some wonderful old ladders leaning against the outside of the building. I think we could have used them to build wonderful bookshelves. We could have put boards across the rungs for shelves to hold the books. They didn’t even cost all that much. However, I think the ladders were much too tall and the bases were too wide. Bummer. It was very difficult to walk away from these ladders.

After we left the antique store, we still had time so we wandered down main street. We came to a beautiful gateway. Of course I found it irresistable–because you never know what fantastic world a gate or door or path will lead to. I was totally not disappointed because when we went through the gate, we crossed a bridge over a pretty little stream, that led to a small island, on which stood a mystical portal that led to many different lands and worlds with adventures in all of space and time: We were at the cutest library EVER. It looked like a beachside cottage–which it sort of once was.

The bridge to the island library 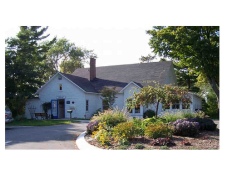 I wandered through the library in delight, and then went to the circulation desk to ask how I could get a library card. The lady asked me what county I was from and then told me that the best thing to do would be to get a card from my own county library (which I already have, duh). I would have had to give them my firstborn son to get a library card–and, well, he was standing right next to me–but I decided against it. Actually, we would have had to pay a $20 annual fee to get an out-of-district card to this library. The fees are used to help support the library and out-of-district fees vary in different counties. The cost was much too much. I mostly wanted to get the card so I could order e-books through their library–and so I could spend an afternoon or two there every now and then. Besides, I’m collecting library cards like kids used to collect Pokemon cards. I have three so far. When the librarian denied me a card, I felt as if the librarians were really evil dragon guardians who would not let me enter magical lands. I was bitterly disappointed.

JJ led me out of the library, across the bridge, through the gate, and back down the street. Earlier we had passed a shop called a “rug studio” and I had asked JJ, “What is a rug studio?” but he didn’t know either. As we walked passed it again, we saw that the door was open and a woman was sitting over a table working on a canvas. I paused, curious about what she was doing. She looked up and saw us and said, “You can come inside if you want” so we did. I told her I had wondered what a “rug studio” was. She pointed to shelves of brightly colored yard and said that she dies all the yarn herself, and then uses it to create her own rugs using a method of punch needle rug hooking. She said she sells them but also teaches classes on how to make them. She let us take a picture of her. I think that someday it might be fun to take a class there. It might help me meet people.

When we left her shop, it was time to go to the movie theater. This theater was built in 1940 and has one screen and old-fashioned charm. It had a cool mural on the ceiling painted with a perspective that looked as if we were looking up into the tops of evergreen trees. JJ had only gone to a modern multi-screen IMAX theater before so this was a new experience for him. He said that he felt this was the first real theater he has ever gone to. I told the guy at the concession stand, who I believe was the owner, that this was our first time there and that we had moved to the area from mid-Michigan. He described the theater to us, where the bathrooms were located, and that the seats at the sides were regular seats while the ones in the middle section were rocking chairs. He said that the lights would be dim during the previews but darken during the movie–and if they didn’t dim, come get him because something was wrong. Meanwhile, he said, the music that was playing was Beethoven Symphony #6. We bought popcorn and soft drinks, which were far cheaper than at more modern theaters. I considered buying a huge bucket of popcorn, “Of my own…” I told JJ. However, when he chose a smaller size, I decided to also so I wouldn’t appear to be greedy. The owner then told us a story about two old ladies who used to come regularly to the theater and every time they came, they each bought the hugest size bucket of popcorn. He and his staff couldn’t believe that the little old ladies were eating that much popcorn so they actually spied on them to see what they were doing with it. To their amazement, the ladies ate it all, leaving not even a kernel in their buckets. LOL.

The owner told us that today was homecoming so he wasn’t expecting many to come to the theater. In fact, only a group of three other people arrived after us and they sat behind us so it was as if we had the theater completely to ourselves–our own private showing. It was rather cool, and not an experience that will happen often. JJ and I chose the middle section with the rocking chairs–about halfway down. The movie we watched was “Ant-Man.” We really enjoyed the movie. It was exciting, but also had humorous parts.

As we were leaving, the owner of the theater owner reminded us that the homecoming parade was about to start and we’d have to hurry if didn’t want to get stuck in town. “Of course, the parade is very short,” he said. We could see the parade approaching and although we could probably have hurried out of town, we decided that we’d wait. It was short–and fun. After it passed we got in the Buggy and drove away, but the parade crossed in front of us at a major intersection and then turned down the road we needed to take. We followed it for a bit, but then turned down a side street and was able to get around it.

All in all we had a great day. We hope to go to the theater again. I love Storybrooke!

← The New New Doctor
The Gift of Autumn →

3 Comments on “A Magical Day”