It’s been snowing off and on for three days. We have a lot of snow now and will be getting more: Another snowstorm is headed our way. Winter has finally arrived.

JJ had quite a day yesterday. On his way to work, as I wrote yesterday, he slid into a ditch. He said later that he thought he had handled it well: When he felt himself sliding toward an intersection, he chose to steer into a snowbank rather than slide into the busy main road and risk getting hit. We agreed that he had done well. He also is aware of his many blessings: He slid into the snowbank right in front of a state policeman, who stopped and stayed with him until EJ arrived to pull him out. JJ could have gotten an expensive ticket for “failure to have control of his car” but the trooper didn’t give him one. Also, a current proof of insurance card was not in his vehicle (oops), which could have gotten him another ticket but, again, the trooper didn’t give him one. When EJ arrived, the trooper told him that he could tell that JJ wasn’t driving carelessly. EJ commented that JJ is not a reckless driver and he’s a good kid.

Anyway, in the evening we got a text from JJ telling us that he needed rescuing again for the second time that day. After work he went out to start the Buggy and it was totally dead. So EJ and I jumped in the Sub and drove to him. We found that JJ had accidentally left the headlights on again. He thought he had shut them off, but hadn’t shut them completely off before he went in to work. EJ tried to jumpstart the Buggy, but it was dead, dead, dead. Apparently it didn’t like having been left on two times in a week–and in the cold.

The weather was very blizzardy last night, with heavy snow and blowing wind. It was interesting watching the wind blow the snow off the stores’ roofs. The temperature was about 20, which isn’t that bad for winter, but the windchill made it feel brutally cold. The cold made my face and hands sting. I’ve been cold for several days now. I would barely get myself warm by holding and drinking hot cups of coffee or apple spice tea before Danny wanted outside, or I joined EJ as he worked on the mailbox, or Danny wanted outside, or EJ and I drove to rescue JJ, or Danny wanted outside, and Danny wants outside again. Brrrr. I’m beginning to growl at Danny when he asks to go out.  “Are you SERIOUS?? You want to go out AGAIN! GRRRRR!” I don’t particularly like cold but I like heat and humidity much, much, much less. It’s easier to deal with cold–just put on more clothes, a blanket, or drink hot coffee or tea–than it is to deal with sweltering heat. Sweltering heat makes me feel like a snowman melting in the sun.

Ok, back to my story. Sitting in the car last night while EJ and JJ tried to start the buggy, I was so cold that I actually trembled. But it was beautifully exciting watching the snow pour down and swirl in the wind. Still…it wasn’t good weather in which to work on a vehicle so we left the buggy in the parking lot and headed home with the snow rushing toward our windshield like stars at warp speed. 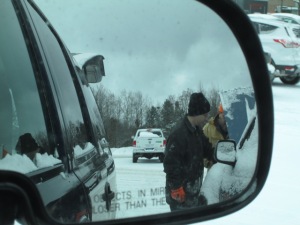 We had to get the Buggy running this morning because JJ had to get to his college class by 1 p.m. and then head to work. JJ had offered to buy a new battery so as soon as we could  we all jumped in the Sub and drove to store where JJ bought the new battery. Then we headed to the parking lot at JJ’s work where the Buggy was waiting. EJ taught JJ how to replace the battery while I stayed in the Sub with the heat on and a blanket on my lap. After the new battery was in, the Buggy started right up and JJ went on to school…and later to work.

The drive in a snow-covered world was beautiful. EJ said that we live in a place that looks like Christmas cards…and I totally agree. I took lots of pictures as we drove along. After we parted from JJ this morning, EJ took me out for lunch. We drove along the coast and saw great chunks of ice in the lake. It was very cool. Ha, ha, pun intended. 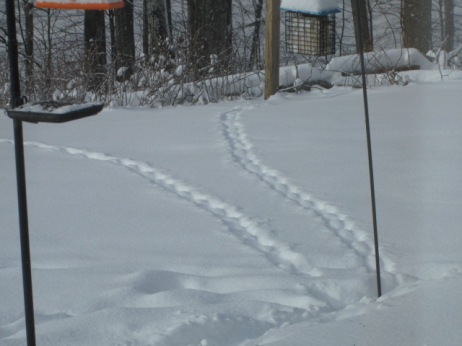 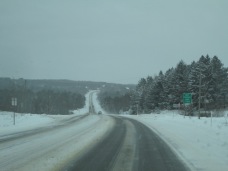 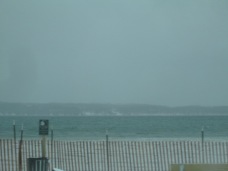 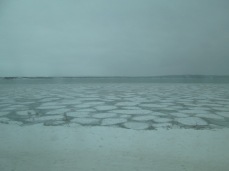 Ice chunks in the lake 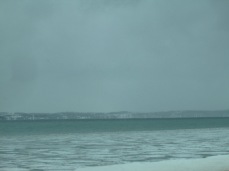 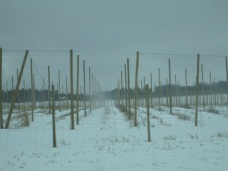 This is a hops farm. The hops will grow up the poles. 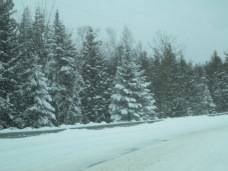 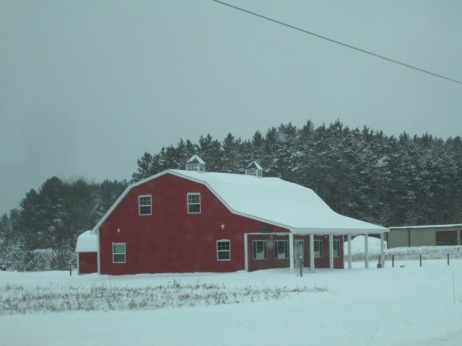 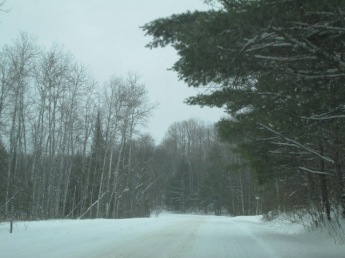 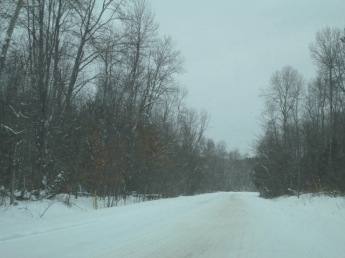 I had meant to ask EJ to stop at the entrance to our driveway so I could get the mail, but we were both so entranced by the snowy beauty of the scenery around us that I forgot. So after we got up to the house, I let Danny out and grabbed a sled to slide down the driveway to the mailbox. I figured I might as well go while I was already outside and cold. The deep snow hindered the sled from traveling fast, and a lot of snow fell into the sled and down into my clothes and boots. I gave up a little more than half way down and walked the rest of the way down. The walk up was more of an effort and I huffed and puffed all the way with Danny trotting along beside me, stopping now and then to chew the snow out of the pads of his feet. If I thought he’d actually wear them, I’d get him little dog boots.

Another snow storm is moving in. Forecasts vary a little about the amounts–some saying as much as 15 inches through Wednesday–but they all agree that we are going to get tons of snow and that at times it will exceed an inch an hour. We also will get very cold temperatures and wind.  The weather forecasters said that the roads could be impossible tomorrow. I texted the weather report to EJ at work and he replied, “Ha! Impossible, eh? CHALLENGE ACCEPTED!” I worry about both of my guys driving home in bad weather, but I worry more about JJ because he is inexperienced.

However, at least JJ made it home tonight with no difficulties.