I woke up super early this morning–about the same time as EJ got up for work. When Danny realized that I was awake, he told me that he wanted to go out. He often wants out as soon as I get up in the morning, which sometimes makes me sigh because I’d prefer to have a cup of coffee first. But I actually think that Danny is being very polite and considerate because he waits until I get out of bed instead of waking me up.

So…I took Danny outside. It was still dark and the stars were beautiful. I had forgotten my flashlight, but I wasn’t worried until I heard a very strange noise in the forest just over the hill. Strange noises make me nervous, especially in the dark and especially when I don’t have my flashlight. I nervously pulled Danny into the house and then noticed that I had stepped in dog poop. YUCK. I cleaned it off my shoe and off the floor. Then I saw that a cat had barfed on the floor. I cleaned that up. I described it all to EJ and he laughed. I suppose it was kind of funny.

I hadn’t planned to get up at 5 a.m., but I had planned to get up earlier than usual because I needed to pick up our new baby chickens as soon as the farm store opened. We originally had planned for EJ to pick up the chicks on his way home from work because he drives right past the feed store. However, the store had texted him that they would like him to pick up the chicks in the morning, which meant I had to go get them. JJ had an appointment scheduled for 10 a.m., so I had to get to the store as soon as it opened to make sure I’d be home in time for him to leave.

The farm storm I went to this morning is a different farm store than the one we went to yesterday. There are several farm stores in our area that we visit. Yesterday’s farm store was a TSC. Today’s farm store is local and family owned. They raise and sell their own crops/seeds/feed. We like to go to this store when we can to support them but they aren’t open as much as the other store so we can’t always get to it. I was their first customer this morning. Two little dogs ran up to me when I entered the store and, of course, I gave them lots of lovings.

I couldn’t wait to get the new chicks! They are even tinier than the previous chicks were when we bought them home. They are as tiny as little buttons. They are adorable! I loved hearing their little chirps all the way home. When I got home, JJ held one in his hand so I could take a photo to show how tiny they are. When he lowered it back into the box, it didn’t want to leave and then the other chicks cuddled up to his hand. Awwww! 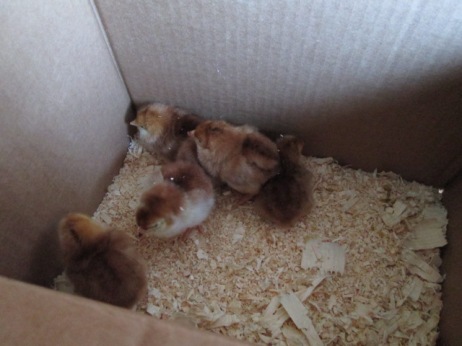 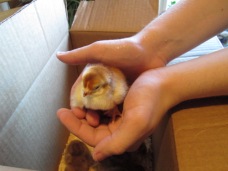 The chicks all cuddled up to JJ’s hand.

The four older chicks are New Hampshire Reds. We chose them from the TSC store. TSC has chicks and ducklings in various horse troughs right in their store. We always go look at them whenever we are in the store and their cuteness always tempts us…but so far we have resisted. We bought straight-run chicks (and ducks) from TSC, which means they could be either male or female–we won’t know until they get older and the males begin to crow and the females begin to lay eggs. 🙂 The six new chicks are Rhode Island Reds. EJ ordered them from the family-owned store to make sure we actually had some females to lay eggs since that’s why we are raising poultry.

Danny loves these new chicks as much as he loves the old ones. He keeps asking to go out into the garage so he can watch them all.

This afternoon I filled Peeper and Cuddle’s bowl of water and let them out of their coop to enjoy it. They had a lot of fun playing in it.

A little later I tried to video the baby chicks in their horse trough. Still videoing, I moved over to the coop to show how much bigger the older chicks are. However, Peeper and Cuddles kept photo-bombing my video. The ducks are such characters! They are a lot of fun to interact with.

This afternoon I went out to the dog pen and pulled up the metal posts. I took a shovel with me and dug down just a little and then wiggled the post until it was loose and then pulled it out. EJ was impressed that I got them all out of the ground.

Oh, I had a scare about mid-morning! I looked out of the living room window just in time to see a crow or raven pick up something gray near the big rocks and carry it off into the forest. I think it was a gray squirrel, but I was really worried that it was our gray cat, Annie. She’s rather fat so I didn’t think a crow/raven could carry her off, but I didn’t see her all day. I was getting a little traumatized at the thought of Annie being carried off. I was so relieved late this afternoon when I finally saw her sleeping in the garage. Whew!