This morning I took my camera with me when I went out to the garage to care for the ducks so that I could try to video our young rooster’s early attempts at crowing. I actually got him crowing THREE times on camera. It doesn’t sound like much of a crow, but he’s new at it. I’m sure he will improve with practice.

The other day I learned about the society of chickens, which is a hierarchical pattern of behavior in a flock. Basically it means that there is a “boss” bird who is in charge and all of the rest of the chickens fall in line under him depending on their rank within the flock.  The boss–or alpha–bird can either be a rooster, if your flock has one, or a dominate hen will fill the role if you don’t. If there is more than one rooster, they will battle for dominance.

In a flock composed entirely of hens, there will be one dominant female who will establish herself as the alpha in the absence of a rooster. Younger birds are typically lower in the hierarchy, and older or more aggressive birds will rise to the top. If a rooster is later added to the flock, the alpha hen may continue to hold rank, even over the rooster if he is young.

The alpha has first choice on food, first access to feeders and water, the best treats, favorite nesting boxes, preferred dust bathing spots, and the highest roosting spots. Alpha chickens will maintain this control through clucks, stance, and the occasional peck. The alpha takes responsibility for making sure the flock dynamics are upheld. She makes sure everyone not only stays in line, but leads the way when it comes to foraging for food, seeking shelter, and warning the others of danger.

I think the most interesting thing I learned is that chickens consider humans to be a member of their flock, which places us in their pecking order.  Sometimes a rooster will try to challenge a human by dancing around him with its wings out and charging towards him. If they do that, they are trying to dominate the human. This is when the human needs to establish dominance. If the rooster feels he has established dominance, some will peck and jump at the human with their spurs and will attack if he turns his back on the rooster. An aggressive chicken can cause some pretty painful wounds. If a chicken becomes too aggressive, he may have to be killed or given away.

Ok, that’s probably more than you wanted to learn about chickens, but I thought it was interesting. Now that I’ve learned that my chickens consider me part of their flock, I always say, “Hello, Tribe!” when I go out to visit them. I watch for aggressive behavior so I can stop it immediately but so far we are all good. It’s fun having the chickens and ducks all run up to me when they see me.

After I cared for my Tribe this morning, I was leaving their cage when I heard a fluttering noise. I looked around and saw that one of the young chickens had gotten out. She’s lucky she didn’t get eaten by the two outdoor cats. I opened the cage door and she ran right in to join her peers. I think that one of the other older chickens was probably pecking at her and she had fluttered and gotten out through one of the wider gaps in the cage. I blocked all the gaps–mostly near the door. In a few days she will be bigger and won’t fit through them.

Later in the morning I went outside to the rock pile and twice filled the wheelbarrow with rocks. I wheeled each load down the driveway a bit and stacked the rocks into more little dams to slow the rush of water when it rains. I feel like a child building rock dams. My dams look like this: 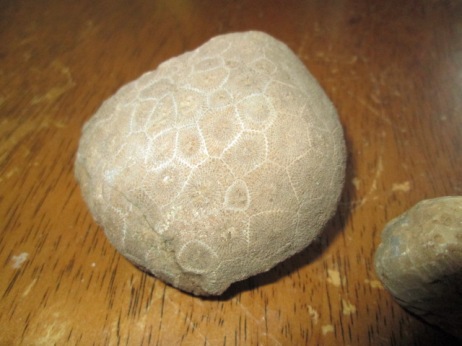 In this photo you can see how beautiful the Petoskey stone is.

The Petoskey stone in my hand

This was the other interesting rock.

Down at our old house, we had a beautiful large lilac bush. I love lilacs and was sad to leave it behind. However, I am thrilled that we have THREE lilac bushes at our new house! One is the same medium lilac color that we had downstate. There is also a bush with darker purple lilacs and a bush with lighter lilacs. I am very blessed!

2 Comments on “My Tribe”