My body was so tired from all the work I did yesterday that I had trouble getting myself going this morning. After I drank the last cup of coffee and said goodbye to JJ, who went off to school, I managed to get myself motivated.

First, I went to the garage to get the two wooden posts for the fencing that I wanted to do later. The posts were imprisoned behind a bunch of other things that I couldn’t move, which meant I would have to pull them up to free them. I considered climbing on top of the stuff in front of the posts, but I imagined falling and seriously hurting myself so I decided against it. Then I got out the ladder, but I couldn’t position myself well enough to give myself the leverage I needed to pull the posts out. So finally I stood on a sturdy wooden box that was just high enough–but not dangerously high–to get the posts free. I knew that it would be difficult to get the posts, which is why I did it before I got too tired from other tasks.

After I freed the posts, I carried them out to the yard and then I got my paint supplies together and headed out to the shed to paint the floor. Normally I wouldn’t paint a shed floor, but I thought the paint might help protect the floor from messy ducks. Ducks are very messy.

EJ had originally suggested using paint from our supply (leftovers from previous projects) to paint the outside of the shed, but we bought paint because I didn’t think we would have enough of any one color to cover the shed and I also wanted the shed to match our house. Although EJ and I both enjoy beautiful things–like beautiful art and beautiful nature–we differ slightly when it comes to practical every day things. EJ loves to re-purpose items and he prefers function and practicality over beauty. So last weekend he dragged the old broken hot tub–which the previous owners left here and which we couldn’t figure out how to get rid of–out into the back yard to re-purpose as a raised garden. It’s not beautiful, but will be very functional. Conversely, although I like functionality, I also like things to have beauty.  So I don’t want my shed to be covered in whatever color paint we happen to have; I intend to make it pretty and cute. 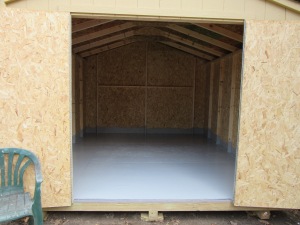 Unlike the outside of the shed, it didn’t matter to me what color the shed floor was since it will just get covered with straw and pine chips and chicken and duck poop. So I used the Floor and Porch paint from our supply. It was gray–perfect floor color. We had probably intended to use it to paint the floor of our unheated back porch in our old house. I sat on the shed floor and used a brush to paint the edges and corners of the shed. I painted up the sides of the walls about six inches or so–where I estimated the straw/pine bedding would reach up to. The November day was pleasant and peaceful and I felt extremely happy and contented as I worked. I love our new home.

After I had painted the edges and corners, I screwed a very long handle onto my roller and, beginning at the back, I painted the floor. The handle was so long that I could stand up as I painted and sort of “mop” the floor. Painting the whole floor only took me about an hour.

After I painted the floor, I put away my paint supplies, changed from my paint clothes into my work clothes, got out the post-hole digger, and put up the two posts I had taken from the garage.

While I was setting up the short fence, the chickens found some grass under the leaves that had been outside their pen. They clucked with delight and gobbled it up. I kept the fence loose until they had eaten it all.

The chickens are so much fun. They always run to me when they see me. They are also very curious and will watch what I’m doing. In this photo, they ran up to me when I started to work on their fence.

Once I freed up the tall fencing, I could finish the new pen. This involved digging a trench so that we can bury about 1-2 feet of fencing, which will make it more difficult for predators to dig under the fence. 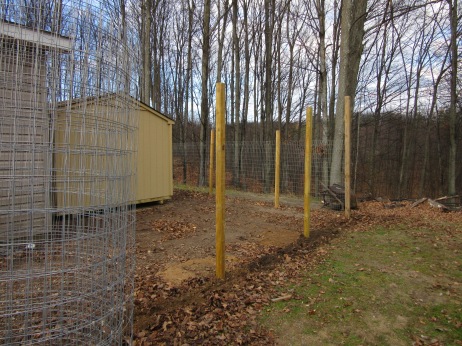 The trench is dug, now I have to unwind the fencing. 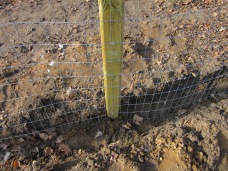 The fencing is in the trench. 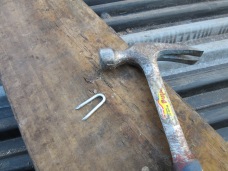 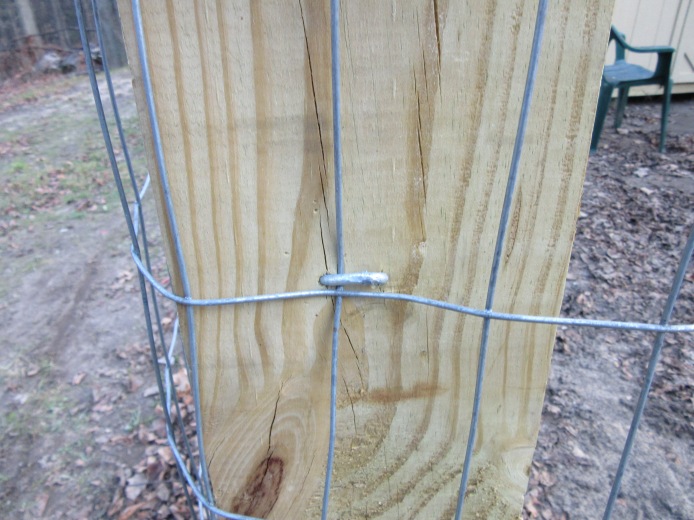 The fence stapled to the posts.

After I finished that side of the pen, I went to the other side and put in another post–which I had taken out of the current duck/chicken pen. Then I dug another trench, unwound the fencing, stapled it to the posts, and refilled the trench.

By the time I finished putting up the fence, I was really tired so I quit for the day. Next, the outside pen will have to be divided into a chicken side and a duck side. I also need a gate into the pen and another one that gives me access from one side to the other. I’m thinking of constructing temporary gates out of bits and pieces of fencing, but I’m hoping EJ can build me better ones.

Once the shed floor is dry, I can move the coops into the shed. However, I can’t do that until EJ makes little doors so that the chickens and ducks can get in and out of the shed. I want to have poultry-sized doors to protect the birds from drafts, snow, rain, which would get into the shed if we had to leave the big doors open.

When the little doors are completed and the coops are moved in, I can divide the interior of the shed to keep the ducks and chickens separated. Then I can move my birds into their new home!

After I finished working outside, I had to work on my household chores. I folded and put away a bunch of laundry that I had done yesterday, vacuumed, cleaned out the litter boxes, refilled the pets’ food and water dishes, washed the days accumulation of dishes, set up the coffee pot for tomorrow, put supper in the oven, shut the ducks and chickens in for the night…and finally I could sit down. My body is so tired that I feel practically crippled. But I feel very satisfied with all the work I did today.

When JJ came home from his class early this afternoon, he told me that his professor said that he is doing very well in the class. The lowest grade he will get (if he skipped all his remaining classes, which he won’t do) is a 3.5. JJ is also thrilled because he was able to get a loan and his next term’s classes are paid for. That takes a lot of stress off him.

EJ came home from work and showed me a memo he had gotten notifying him that a safety audit had been performed in his department on their busiest day of the month and “without a doubt” his “area is head and shoulder above any other area” that was audited. So that made EJ feel good.

We are all thriving here.