Yesterday afternoon the weather cleared and we actually had a bit of blue skies and sunshine. It’s been so long since we’ve seen the sun that it actually hurt my eyes. Ok, maybe not…but almost.

It’s been very cold because of a north wind blowing arctic cold into our region. The clear skies caused the temps to plummet even lower. EJ said that when he got up this morning it was 9 degrees. The wind chills make it feel even colder. More arctic cold is headed our way, along with 50 mph winds and more snow. Brrrrr.

We have to keep the driveway cleared so the snow doesn’t build up. It’s a lot easier to snowblow a couple inches of snow than it is to snowblow a foot or more. Plus, accumulations of snow on the driveway increase our likelihood of getting stuck. I have been doing most of the snowblowing. It’s actually sort of fun but it’s also very exhausting. Last Saturday we decided to take a break and rest (it was, after all, Shabbat) since we had only gotten a couple inches of snow. However, when JJ left for work he got stuck at the end of the driveway where the snow from the county snowplows had piled up. EJ drove JJ to work in the Suburban and then began to work on getting the Xterra unstuck. Our neighbor on the hill across the road came over and pulled him out with his tractor and then plowed away the snow at the end of the driveway. This was the first time we (meaning EJ) had met this neighbor. They had a nice chat. The guy also has chickens. Apparently, he hopes to give us some stuff for our chickens before he goes off to Florida for several months.

After EJ got the Xterra up the driveway and parked in its spot in front of the garage, I snowblowed the rest of the driveway. As I’ve said, we can’t let the snow pile up. EJ took the time to put another vent in the shed coop so the moisture doesn’t build up inside and make the birds sick. So much for a restful Shabbat.

Today JJ took a turn at clearing the driveway. I was glad for his help because it was COLD.

Despite the challenges, I still like living in the North.

Yesterday evening at about dusk, Danny wanted to go outside to “do his business.” While I was waiting for him, I heard a loud “flappity flap.” I looked up and saw a large bird landing high in a tree behind the house. It was a turkey. Living in town all my life, my only encounters with turkeys were seeing them in fields as we drove through the countryside. I didn’t know all that much about them and thought very little about them. I didn’t realize until we moved to our enchanted forest that turkeys can fly and that they roost in trees. I–and EJ–thought they roosted in the lower branches of trees. I didn’t realize that they flew high up into the trees until I saw them in the tree tops a couple of days ago. Amazing.

The turkey was still in the tree this morning. I took one photo and was hoping to take more–and a video–but my camera turned itself off because its battery was low. Bummer! However, I’m going to make sure I look at the trees at dusk and in the early mornings to see if I can spot turkeys roosting…or other interesting critters in the tree tops.

The first birds that arrived at our feeders when I put them out a couple of weeks ago were chickadees and nuthatches. Then the various woodpeckers arrived. In the last day or two gold finches and blue jays have appeared. Blue jays, cardinals, and sparrows were extremely common at our house downstate, but up here I don’t see many blue jays, I’ve only seen a couple cardinals–last winter–and so far I haven’t seen any sparrows at my feeders.

I wasn’t able to get a photo of the blue jays, but here are some of the gold finches. My new camera allows me to get more detail when I zoom in. If you click on the photos to enlarge them, you can see seeds in the birds’ beaks. 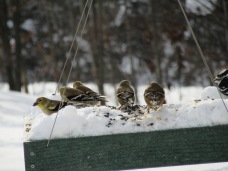 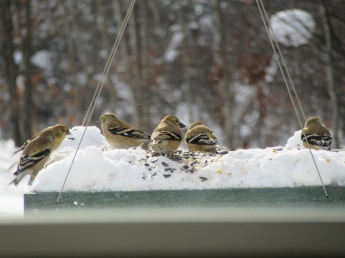 This morning I noticed a bunch of deer tracks all over the yard. Some were right up to the house–as if the deer came up to peek in the windows. I thought that was cool.

← Let It Snow….
The Midnight Journey to the Magic Box →