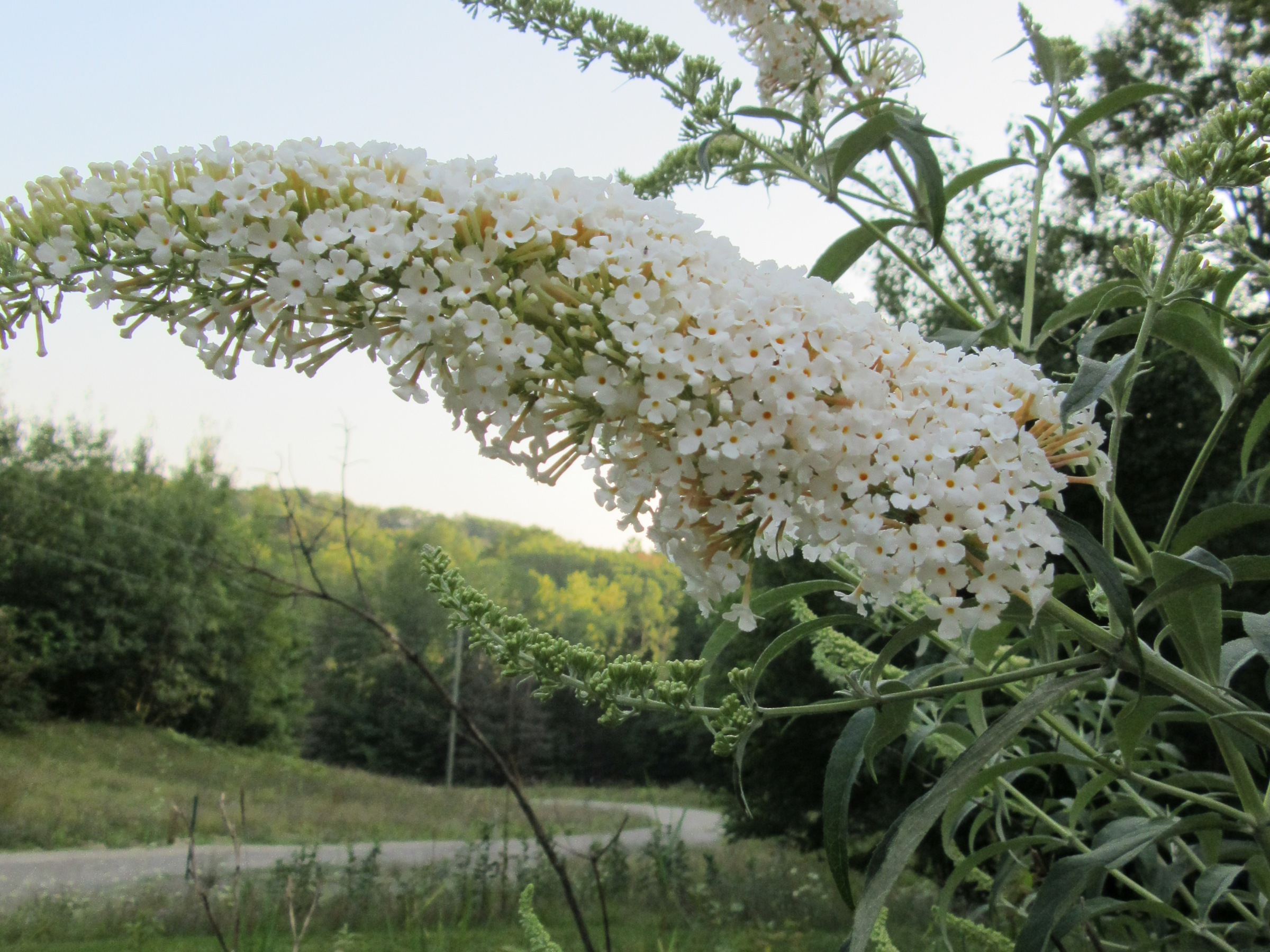 Today I chased after butterflies….both figuratively and literally and maybe even metaphorically.

I had trouble getting motivated this morning. I’d start a task, and then get distracted and side-tracked. I usually make the bed while the cats are eating their canned food, which I divide among them in the morning. However, I forgot today so Timmy was sleeping on the bed when I went to make it. Then it took me about 20 minutes to make the bed because Timmy woke up and was being so cute that I had to keep pausing to give him lovings.

I finally got some laundry washed and took it out to hang on the clothesline. The day was perfect for drying clothes outside–sunny and breezy. I love hanging the clothes outside because our Enchanted Forest is so beautiful and peaceful.

I had just started hanging up clothes when I saw two Monarch Butterflies playing tag near the butterfly bush, so I left the basket of wet clothes near the clothesline and wandered over to take a video. The butterflies twirted around so quickly that it was difficult to keep them in view, but I did manage to capture them on video: 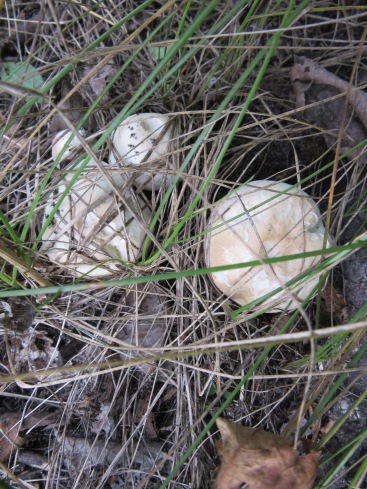 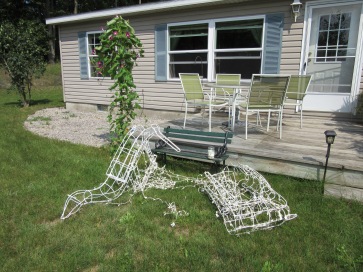 Between loads of laundry, I sat on our little park bench near the deck and took Christmas lights off the wire deer that the previous owner left behind.

While I was taking off the Christmas lights, I happened to glance down and see an interesting spiderweb. It looked sort of metallic. I stopped taking the lights off the deer and took a photo of the spider web. I thought it was amazing–although I’ve got to wonder what kind of spider weaves metallic webs???

I went back to taking Christmas lights off the deer. I heard EJ hammering near the clothesline, so I got up to peek at what he was doing. He was building me a platform to hold the laundry baskets. I took photos of him. He protested, but I reminded him that he is my muse, my inspiration. I love taking photos of him: 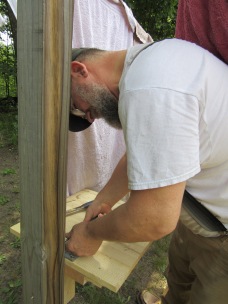 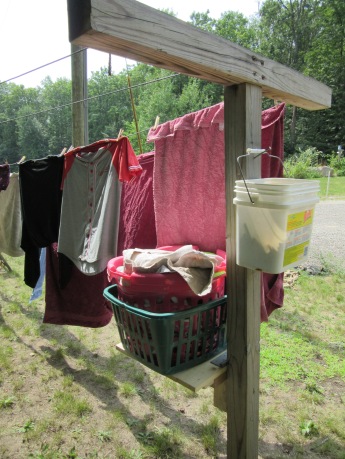 After I finished taking the lights off the deer, I took my red stool, a hammer, and some nails out to the coop and hung the Christmas lights inside. I’ve read that one of the factors that cause chickens to stop laying eggs in the winter is the lack of light. So I thought I’d hang up Christmas lights to see if it’s true. At the very least, it will provide a festive light for me. While I was hanging the lights, I noticed one hen looking in at another hen in the nesting box. I thought it was cute so I stopped and took a photo.

While I was hanging Christmas lights, EJ got out our folding table and filleted the fish he caught yesterday. Then he went inside and cooked the fish and made a side dish of zucchini, squash, tomatoes, and mozzarella cheese, all of which came from our garden. Well, except for the cheese. It was very, very delicious. There wasn’t much left of the fish after supper. Well, there was actually enough leftover that EJ said he will make a chowder tomorrow. He knows more about cooking fish than I do. 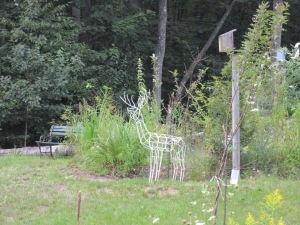 EJ was going to throw the wire deer away after I took off the lights, but I had grown rather fond of them so I suggested to him that we could put one deer at the bottom of our driveway with our house numbers on it. He thought that was a good idea. Meanwhile, I put one of the two deer up on the hill near the big rocks in our front yard. I think the deer looks regal.

The second deer needs its back legs fastened more securely. I laid him on the folding table that EJ had left out as if it was a deer he was getting ready to cut up. I didn’t tell him about it because I thought it would be funny for him to unexpectedly find the deer on the table. He did come into the house a bit later laughing over it.

When EJ was filleting the fish, he threw the tail to the ducks and the head to the chickens. I went out later and found the head lying untouched in the chicken pen. I told EJ that I didn’t think the chickens liked it…so he went out and put it on the ledge inside the ducks’ little pool. I looked out the window later and the fish head was still there and the ducks were standing at the opposite end of the pool. I thought, “Ducks are water birds and they eat fish. What kind of ducks are you that you aren’t eating the fish?” I mean, I think wild ducks eat whole fish–they hardly wait for someone to fillet it for them. EJ went out and buried the fish head in the garden.

I went with EJ while he buried the fish head and afterwards we wandered through the meadow alongside the driveway. I was searching for interesting insects among the milkweed that I could photo while EJ went ahead and wandered through Deer Valley. When we rejoined each other on the driveway, he told me that he picked up some boards that he was going to drag up to the hill to burn and found a nest of little snakes underneath them. There were about four pencil-long snakes. He believes they were garter snakes. He put the boards back down and left them. I would have taken photos of them, but I didn’t want to get too close to a nest of snakes.

Near the bottom of the driveway, we saw the grass all flattened down in Rabbit Meadow where deer have lain. Cool!

We continued on, and around the curve EJ suddenly exclaimed, “Look! Those are Brown Thrashers!” EJ has seen Brown Thrashers before, but these are the very first ones that I have seen. There were about five of them. That makes, uh, about seven or eight (I’ve lost count) new birds I’ve seen this summer! I am thrilled! I took lots of photos. I wasn’t sure any of them would turn out because the birds were easily spooked so we kept back and I zoomed way in with my camera. Some were blurry but I did get a few good photos. 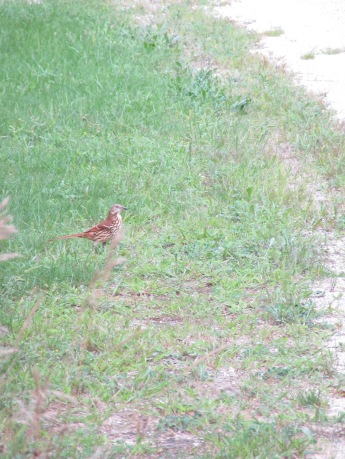 We often see a little rabbit just past the pine trees at the entrance to our neighbor’s driveway, so we snuck quietly to see if we could see him this evening. I couldn’t resist: As we sneaked, I whispered to EJ, “Shhhh! Be vwery, vwery, qwiet.” We did see the little rabbit just where we expected. We watched him for a bit and I took photos. He (or she) was about teenager-sized and was very cute. I was able to zoom in and get closeups. In some of the photos I can see the details of his ears. 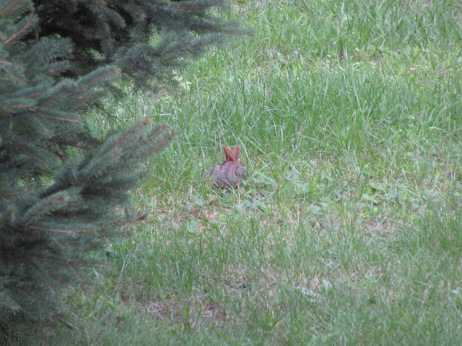 Despite all my literal, figurative, and maybe even metaphorical chasing of butterflies that I did today, I got all my tasks done: bed made, laundry washed, Christmas lights in the coop hung, dishes washed, carpets vacuumed. Plus, we had lots of fun and saw many interesting things. It was a very good day in the Enchanted Forest.