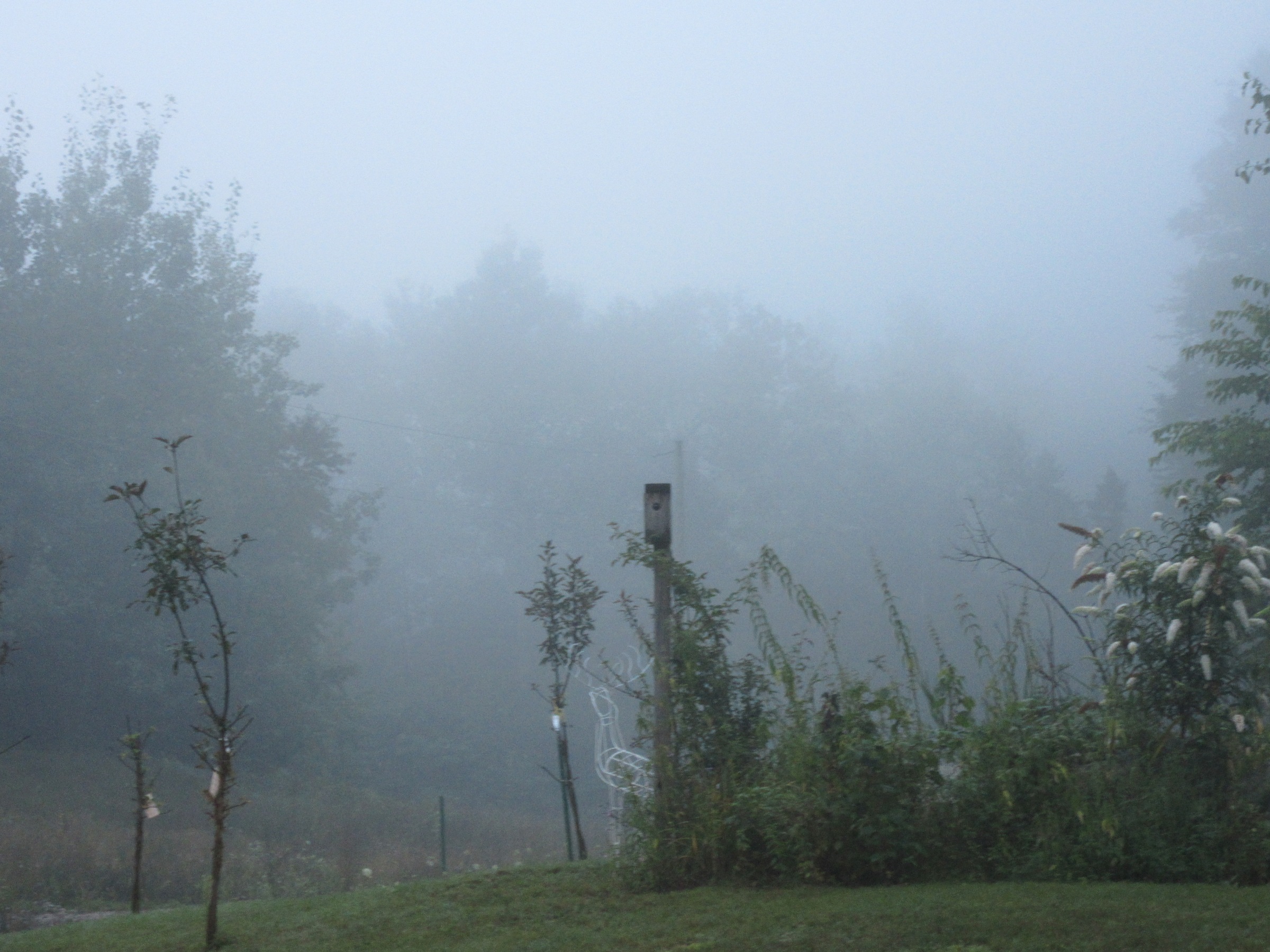 Today arrived with blue skies and sunshine after two days of heavy morning fog. I like fog. It wraps everything with mystery. But sunshine is nice too.

The temperatures have been getting cooler–during both the day and the night. We are wearing sweatshirts and sweaters more often, and a couple nights we put granny’s quilt on the bed for extra warmth. I love autumn but it feels as if September nudged August aside. I began to wonder if autumn always takes me by surprise and I just always think it’s early, but I just read an article at FB from The Detroit Free Press that said “While it feels a little early to be talking about fall colors, heavier precipitation during the summer months points to an earlier-than-usual peak season.” The article predicted that by October 8th the whole state of Michigan will be past its peak. Wow. That really is much earlier than usual.

The days are noticeably darker at both ends. I’m putting the chickens and ducks to bed before 8:30 pm now, and the mornings remain dark until about 7 a.m. I read that one of the factors that cause poultry to stop laying eggs is a decrease in light, so I’m going outside when it’s still dark in the mornings and turning on the Christmas lights in the coop. I read that it’s not a good idea to do this all year around because poultry need a rest period or their lives are shortened. So I won’t try to get them to lay all winter.  I just think August is too soon for them to stop laying. I’m don’t think it’s too much to expect for them to lay eggs through September.

Tuesday morning was very foggy. Seconds after EJ left the house to go to work, I heard him call out to me, “Hurry! Get your camera!” I immediately grabbed my camera, slipped on my slip-on shoes, and rushed out. EJ pointed to a toad by the porch. It was an unusual tan color. Usually the toads we see are a darker muddier brown. I took some photos, and later searched the internet in order to discover its identity. I learned that Michigan has eleven species of frogs but only two species of toads–the Eastern American Toad and the Fowler’s toad. The first is a dark muddy brown and the second is a light tan. The toad EJ pointed out is a Fowler’s Toad. In attempting to identify it, I found a wildlife site in which I can enter observations about when and where I see things like toads. I entered my data because I think it’s fun and interesting.  I have seen several Fowler’s Toads hanging about in various places this week. I like toads. They are good for gardens.

Seeing the toad on a foggy morning stirred memories of a childhood vacation. Actually, since only my parents, my younger sister, and I had been on that vacation (our older siblings having moved out by then), it must have been when I was in my late teens. We stayed at a campground on the coast of Lake Michigan. Steep stairs led from the campground to the beach and from the beach we could see a pretty lighthouse. The lighthouse didn’t seem to be very far away–maybe a mile or two–so I suggested that we walk to it the next morning. I’ve always loved walking in beautiful places, even as a child. My family thought that was a splendid idea!

The next morning we eagerly set off down the beach. It was extremely foggy–so foggy that there were no landmarks to tell us where we were or how much progress we had made. It was very surreal. The only noises we could hear was the muted sounds of our own voices, the gentle murmur of the waves of Lake Michigan washing the shore, and the deep warning of the foghorn sounding from the lighthouse. It all added to the sense of magic, mystery, and adventure. It was beautiful.

We walked and walked and walked. We got tired, but we still walked and walked and walked. The fog blinded us, and the sound of the foghorn seemed to grow no closer. Our energy seeped away, but still we walked. What we didn’t realize until later was that hidden between our campground and the lighthouse was a bay that curved inward, so what looked like a short morning walk was actually more like a ten-mile hike. Everyone started out the morning exclaiming “What a good idea we had to walk to the lighthouse!” but they ended up refusing to look at me and grumbling, “What a terrible idea you had, TJ!” The next day we all groaned with the sore muscles that crippled us. But I’m still glad we went on the walk. It was awesome!

Halfway through the walk to the lighthouse, I had to go pee. Really badly. There were no bathrooms nearby that we could see, but I merely stepped away into the thick fog until it wrapped me in privacy. When I finished, I looked up and saw the hugest frog ever sitting in the sand. I was amazed! I hurried back to my still-at-that-time-speaking-to-me family, and told them excitedly, “There is a GIANT frog over there!” I tried to lead them back to where I had seen it, but I couldn’t find it.  It had vanished in the mysterious fog. 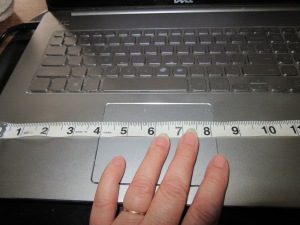 In the years since then, I have sometimes wondered if I really did see a frog that big. Maybe, in the fog, I had just imagined it? I mean, no one else in my family had seen it, I’ve never heard of anyone describing such a large frog, and it’s hard to believe that I actually did see a giant frog on the shores of Lake Michigan. Yet…how could I imagine a frog that I couldn’t imagine would be so big? This week when I was reading information about toads/frogs in the hope of identifying the ones in our Enchanted Forest, I read on the Michigan Department of Natural Resources site that bullfrogs can become as large as 8 inches. I got out my measuring tape and stretched it to 8 inches. Yup. That could have been the size of the frog I saw so long ago.  I learned that the range of bullfrogs is statewide, but their numbers have been reduced due to over-harvesting for “frog legs” and now they are rare over much of state. That might be why I’ve never heard of anyone else seeing such a huge frog. Did you know that bullfrogs can eat small birds???

Tuesday when JJ returned from his college classes, he pulled me outside to show me the millipede that was in our driveway near our front porch. We stood and marveled over it. We weren’t sure at first that it was alive, but then we saw it move. It had curled up to protect itself. It was the largest millipede any of us have ever seen. It was rather beautiful. I have a sort of love/hate relationship with insects–or rather a tolerance/hate relationship with them. Spiders and ticks are closer to the “hate” side. I do not like any insect in my personal space, but I can appreciate how interesting they can be.

As JJ and I admired the millipede, I thought about how glad I am that all three of us always enjoy the beauty and wonder of small common things. Actually, we see nothing common in common things. It makes me think of a favorite poem by Elizabeth Barrett Browning:

Earth’s crammed with heaven,
And every common bush afire with God;
But only he who sees, takes off his shoes,
The rest sit round it and pluck blackberries,
And daub their natural faces unaware.

Throughout this week, I have been enjoying the Monarch Butterflies and Hummingbirds visiting the white butterfly bush near the big bush. Several times I tried to grow a butterfly bush in our garden downstate, but I was unsuccessful. Our property downstate was mostly shady so we had trouble growing flowery plants. There were two butterefly bushes already growing at our house here in Northern Michigan when we moved in, one white and one purple. I love it. There were so many things that we loved already in place at our new house–like four lilac bushes of (instead of one) and several climbing roses.

Yesterday evening just after dark, we heard a terrible caterwauling. Coyotes! EJ and I went outside to double-check that the coop was shut up tight and that Annie our cat was safely in the garage. The coyotes sounded as if they were just inside the forest.

Monday is Labor Day so EJ has it off. He is hoping to take tomorrow off as a vacation day so he can have a four-day weekend. We don’t yet know if he has it off, but if he does, we would like to get projects done–like finally painting the kitchen.

← I Was There
A Burst of Sunbeam Glow →