It was supposed to rain all day, so I expected a quiet day at home–which didn’t bother me any because I didn’t sleep well last night. I woke at 3 a.m. with pain from sciatica. I took some Tylenol but still had trouble sleeping. I didn’t want to wake up EJ so I went to the living room and laid on the couch. I finally fell asleep about 5 a.m. About 7:30 a.m. I became aware that the cats were making a lot of noise. I always divide up a can of cat food for them each morning just before I go care for the ducks and chickens–about 7 a.m. I suspect they were trying to wake me up because I was late feeding them.

Around 10 a.m. or so, EJ suggested that maybe we could go for a drive even if it was raining. I exclaimed that maybe we could drive to Lake Michigan. I’ve been wanting to see the Lake in stormy weather. So we got together our cameras, a thermos of coffee, a bottle of lemonade for EJ and ice tea for me, and an umbrella, and we hopped in the Suburban. Our first stop was to the grocery store for some nuts and pumpkin seeds in case we got hungry, and a two-slice container of cheese cake because, after all, we are celebrating my birthday. JJ didn’t go with us because he always has to work on the weekends. But that’s ok because he really doesn’t enjoy long drives or rock hounding and he so gets bored coming with us.

We headed north along a road that hugs the coast of Lake Michigan. EJ stopped at our favorite roadside park. It’s very beautiful. We walked along the shore for quite a while. A few waves caught me by surprise and soaked my shoes and socks–so although it’s October, I took them off and folded up the legs of my jeans so it didn’t matter if the waves swept in. We looked for pretty, interesting rocks as we walked along. I found quite a few Petoskey Stones, which is Michigan’s state stone. Searching for Petoskey Stones is really the official past-time at Lake Michigan. The best time to search for them is after a storm when the waves churn up the sand and wash new rocks ashore. EJ thinks he might have found some Leland Bluestones. He also found what he calls “sea glass,” which originates as pieces of glass from broken bottles, broken tableware, or even shipwrecks, which are rolled and tumbled in the ocean (or lake) for years until all of their edges are rounded off, and the slickness of the glass has been worn to a frosted appearance. We spent a happy hour or two looking for rocks. 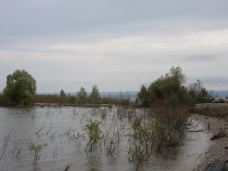 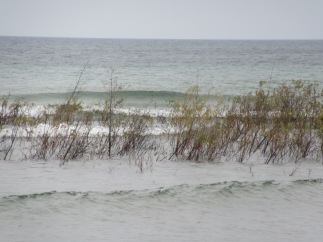 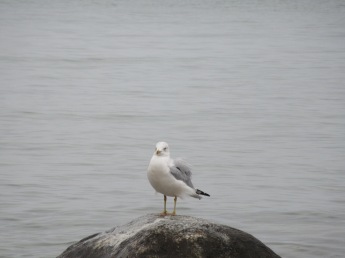 EJ had thought we might head over to the east where there are elk herds running free, but we decided to first drive up to Mackinaw City to see the Mackinac Bridge. On the way, we drove through the city of Petoskey. It has many beautiful houses (which I videoed as we drove by). Earnest Hemingway once lived in Petoskey.

Michiganders love the Mackinac Bridge. EJ and I think it is so beautiful that it always thrills our hearts to see it. We didn’t have time to cross the bridge today–and were really even tempted because there was a high wind advisory. The The Bridge is designed to sway in the wind, and I’ve heard it can be a scary experience. We walked along the shore and enjoyed the view of the bridge and the lighthouse.  We also saw some large boats (called ships in the ocean) carrying cargo across the Great Lakes. 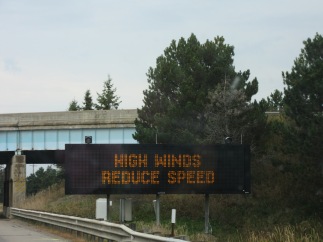 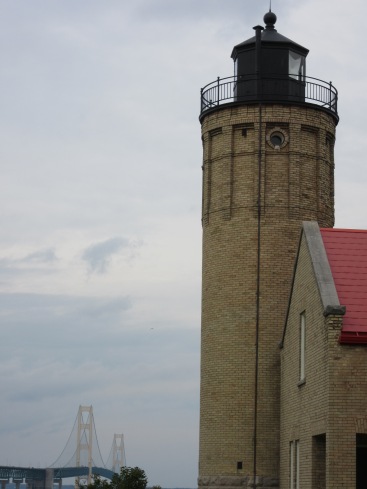 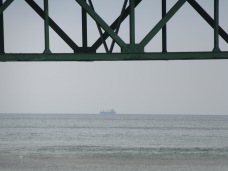 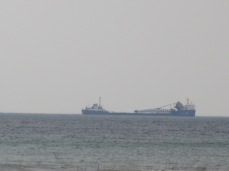 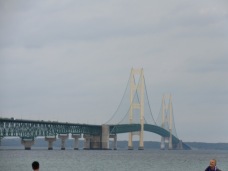 We had considered stopping to eat at the same restaurant we had eaten at last year, but we decided not to spend the money or time for a sit-down meal. Instead, we went to a little store and bought a couple pasties. Anyone who goes to Northern Michigan–especially the Upper Peninsula–MUST eat a pasty. As the History Channel describes in their article:

Few meals have roots as deep as the Cornish pasty, a hand-held meat-and-vegetable pie developed as a lunch for workers in the ancient English tin mining region of Cornwall….The Cornish pasty arrived in Michigan’s Upper Peninsula (U.P.) in the 1840s, just a few years after Michigan’s present-day boundaries were carved out of the former Northwest Territory. Adventurers crossed the Straits of Mackinac to the isolated U.P. to prospect for minerals, discovering significant iron and copper deposits beneath the northern forests. Experienced miners from Cornwall immigrated to help develop the mines, bringing pasty-making with them. Although Cornish migration was soon supplanted by much larger waves of Finns and Italians, the pasty took hold as a traditional miners’ food….After the 1957 Mackinac Bridge opened the Upper Peninsula for tourism from southern Michigan, the pasty shifted from being a food mainly cooked at home by U.P. locals (known as “Yoopers”) to one sold at restaurants to visitors from southern Michigan and beyond (playfully derided as “Fudgies” for their preferred dessert).

Although it’s no longer summer, there were a lot of tourists in Mackinaw City so we drove further east along the coast to a small roadside park. We ate our pasties sitting on large rocks on the shore with a view of the Mackinac Bridge and the big boats. 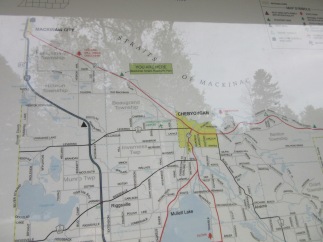 We stopped at this park. 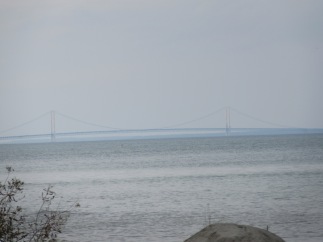 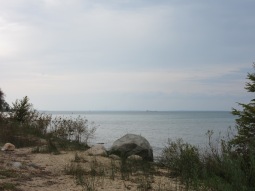 After we ate, we headed south. We intended to drive in the area where the elks were, but we had to get home before dark to put the ducks and chickens safely in their coop. We decided to go see the elks another day. Tomorrow we are going to ride on the chair lift at the ski resort, and maybe do a couple more things closer to home.

The day started out rainy, but at most we had only a few times of sprinkles now and then. It only started raining in earnest after we got home.

We were really tired by the time we got home, but we have a wonderful day! We always have such good times on my birthday that I asked EJ if he wanted to do similar things for his birthday in March–assuming we don’t have so much snow that travel is difficult. He said he thought we should take turns celebrating our birthdays whenever we have free weekends. So next weekend we are going to celebrate EJ’s birthday by visiting his friend and his wife. They will be staying at a campground near us. After our visit, we will do other fun stuff. Then the next free weekend we will celebrate my birthday again. And then EJ’s. I mean, who says we have to wait for the actually days of our birth, right?