Last night EJ and I went to the Owl Prowl at the Grass River Nature Area. It was already dark when we entered the nature area. We drove a mile through the forest to get to the parking area, and then we had maybe a 50 yard walk to the Visitor’s Center, which was very nice with all sorts of displays. This particular nature area has many classes and activities throughout the year, including several Owl Prowls. Ours was the last one until February.

We began our adventure in a classroom where a naturalist told us what owls were in our area: The Great Horned Owl, The Barred Owl, the Eastern Screech Owl, and the Saw-whet. Although Snowy Owls are not usually in Michigan, in recent years they have been sighted in our area. The naturalist also shared some interesting facts about the owls and let us listen to some of their calls. I thought it interesting that Saw-whet Owls like to nest in Northern Flicker holes, and if you knock on the tree, they often will stick their heads out. I suspect that I will now be knocking on many trees on our property with woodpecker holes in them.

After the classroom presentation, we went on a night walk to look for owls. It was not raining when we first arrived at the Visitor Center, but it was raining as we left for our night walk–not hard, just enough to get wet. None of us minded.  We followed our leader into the dark, dark forest. We all had red-lighted flashlights so our night-vision would not be affected. After a bit, our leader stopped and played owl sounds on her phone, which had an amplifier attached to it. Apparently playing owl sounds will attract them. We listened and we watched. Nothing. She tried several more times. Nothing. So we went down a side trail and she played the owl sounds again. Nothing. At one point, I could see a patch of stars overhead so I thought that maybe the weather would clear. Instead, it began raining harder so we got completely soaked. We finally concluded that the owls were probably staying home that night because of the rain–unlike silly us who were out wandering in the forest. We all agreed to end our Owl Prowl.

Despite the rain and the lack of owls, we had a very wonderful time–it was a HOOT! There’s nothing like walking in a dark, dark forest at night in the rain. There was an air of mystery and adventure and suspense. I did wonder at times what we would do if we encountered a bear or a cougar, but that was all part of the fun–like telling scary stories around the campfire.

I don’t have any photos of our adventure. I didn’t take my camera with me last night because, you know, it was night and we were in a dark, dark forest.

This morning I happened to glance out the window as I was pouring a cup of coffee and saw our beautiful red tree spotlighted by the sun so that it was a flaming fire. I grabbed my camera and ran outside and took several photos. It was good that I went out when I did because a few moments later the sun rose higher in the sky and the tree was no longer spotlighted. It was a beautiful sight while it lasted! 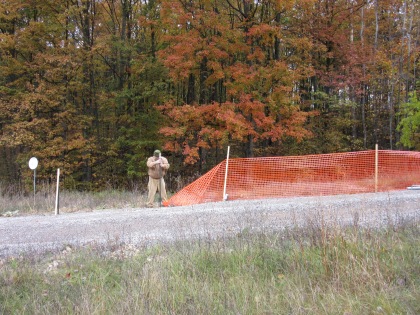 After breakfast and a pot of coffee, EJ and I went outside and began putting up the snow fence along the right side of the driveway.  A snow fence is a barrier that minimizes the amount of snowdrift on roadways. Hopefully our snow fence will prevent deep snow from accumulating on our driveway. It took us several hours to put up the fence. We didn’t have enough t-posts, but we took out some of the t-posts in the poultry pen and replaced them with wooden posts from the garage. I also pulled out the post at the edge of the forest that my bird house was on. I haven’t seen any birds use it anyway. We ran out of fencing before we ran out of driveway. Hopefully we can get more fencing soon–before the snow falls–but even if we can’t, at least part of our driveway will be protected, which is more than the last couple of years.

EJ and I took a break and then we started back down the driveway to finish up the snow fence. We were still up near the house when I glanced over and saw 11 turkeys standing at the corner of the house. They didn’t move as EJ and I walked down the driveway. When we had gotten below the hill, EJ wondered what the turkeys would do if we were very still. He stood motionless while I stooped down and watched. The turkeys walked over the hill toward us, along the edge of the forest about 20 feet from us, and went into the forest. It was very cool. All day long I had carried my camera with me, but I had left it in the house and didn’t have it with me. Bummer.

I gathered eggs and refilled the chicken/ducks’ drinking water while EJ fixed the latch on the coop. It hadn’t been installed correctly and I couldn’t get it to close properly. Throughout the day, I also did laundry, washed dishes, vacuumed, and other daily tasks. We didn’t get the protective fencing around the apple trees. Besides the fact that we ran out of time and energy, we aren’t quite sure how we are going to do it. We have to ponder it a bit.

After most of our other tasks were done, EJ got out his hunting gun and we walked down the driveway and into deer meadow. He has a deer target set up and he sighted his gun by shooting the target. He hit right where he wanted to. So he’s set for hunting season. He always hunts at his friend’s uncle’s 100 acre woods on the other side of the state. 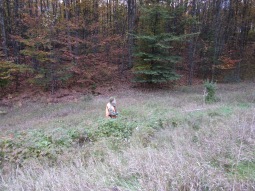 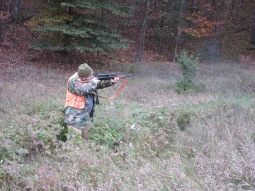 Our new cat Josette is very sweet and affectionate to us, but she hisses and swats at the other pets. That’s to be expected as she adjusts to new surroundings. Danny just keeps out of her way, while the other cats are wary and curious. With four and a half cats in the house (four black cats and one black and white one), I feel as if I am surrounded by minions.

Josette’s previous owner had said that she was litter trained but had been living in the barn for at least a year. She felt Josette wanted to be a house cat because she kept coming through the dog door–probably because she was scared of the unknown wild animal living in the barn. We don’t mind the hissing adjustment period–they always eventually get used to each other–but Josette hasn’t been using the litter box, and that IS a problem. So we are thinking she is going to have to go back to being an outside cat, living in our garage with Annie and Madeline. I always shut up new cats for a few days until they recognize that this is their new home, but I can’t shut Josette in the garage until Madeline is in the garage because I don’t want to shut Madeline out of her shelter. Sometimes Madeline is out roaming for hours and I don’t see her until the next morning. I keep going to the garage to see if Madeline has returned. Meanwhile, Josette is shut in the extra bathroom with food, water, and a litter box, which she hasn’t used.