Cats, Poultry, and the Snow Fence 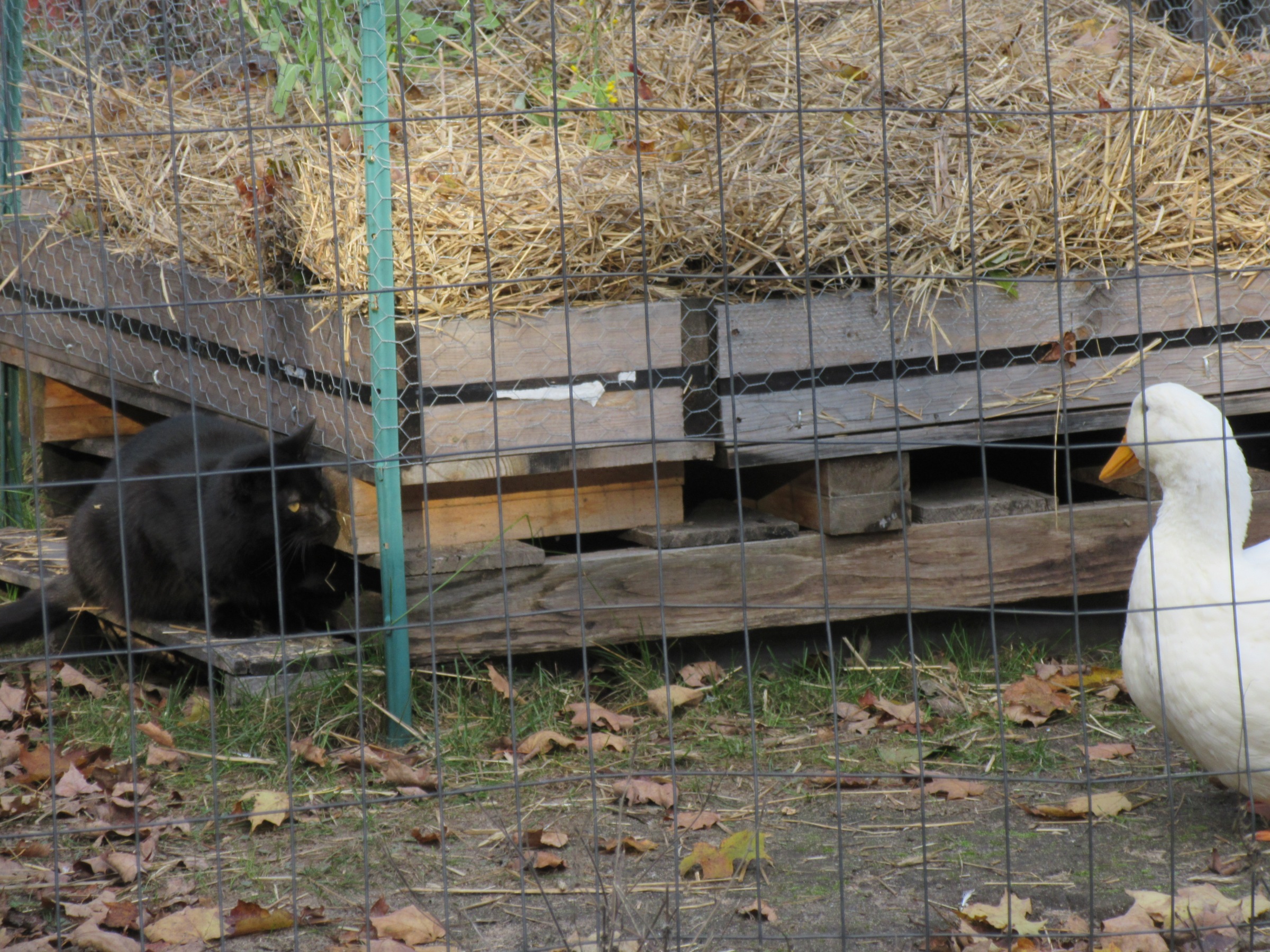 After our busy day on Saturday, EJ and I took it easier on Sunday. I did small tasks such as cleaning the house and doing laundry. I spread one straw bale among the raised garden beds to (hopefully) help the plants survive the winter. I also poured the dry dog and cat food into their storage bins to keep it safe from rodents and insects. The storage bins are actually very large plastic trash cans with lids. The bins have about 100 pounds of kibbles in them. It feels good to have them filled up before winter so I don’t have to worry about running out during in a storm. EJ did a few tasks of his own, and he cooked some venison that had been in our freezer. It was yummy.

In between my various tasks, I searched the Internet for fun things EJ and I can do on our weekend adventures. I have always wanted to go on a sleigh ride and there are quite a few in the area. There is also a place where we could go on a sled dog ride, which I think would be really cool, but I think it would be too painful for EJ’s bad back so we will just watch dog sled races instead. I would also love to go see snow and ice sculptures…there are so many things to do in Northern Michigan.

This last weekend Daylight Savings Time ended so we moved our clocks back an hour. The time change forces me to rearrange my schedule. I don’t mind the sun rising when I go out in the mornings to care for the poultry, and it’s not really all that bad to gather eggs and refill water buckets at 3 p.m. instead of 4 pm. However, it’s dark enough that I have to put the ducks and chickens to bed before EJ gets home from work.

The indoor cats seem to  be having trouble adjusting to the time change as well. I wasn’t awake enough to notice the time, but they seemed to be very active last night. EJ said that he caught Timmy jumping from me to him and back again, and I know that at one point Timmy was poking my face. The time might have changed, but they expect to be fed at the same time as before.

This morning I put up the remainder of the snow fence. EJ had said that we would do it together, but he gets home from work after dark, and he’s tired from a long day at work, and putting up the snow fence was something I could easily do. Because EJ and I had put the other segment of fencing up together a week ago, I knew how to do it. I wanted to get it done while the weather was still relatively nice because we are expecting winter weather at the end of this week–with several inches of snow, wind gusts of 25-30 mph which could cause blowing and drifting snow, and temperatures falling into the teens. Brrrrr. I  took the 100 foot roll of snow fencing that we had bought on Saturday down the hill and got to work. I think that we have put up a total of 300 feet of snow fence.

I still had some fencing left after fastening it to the last t-post, so I dug up another t-post from the chicken pen and replaced it with a wooden post from the garage. I laughed because the chickens all came up to the fence to watch me work. I’m not sure if they were just curious or inspecting my work. I chatted with them while I worked.

Josette seems fascinated with the ducks and chickens. She often sits outside the pen and watches them, but not in a predatory way. She also loves to follow me into the duck pen when I go care for them. She just sort of meanders calmly through the pen. Neither Josette or the poultry seem alarmed by the other. Although Josette can’t go into the chicken pen, she watches them through the fence.

Josette outside the pen watching the ducks 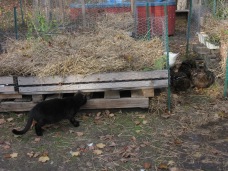 Josette inside the pen

I haven’t seen Madeline in about four days so I’m a bit concerned. She’s so sweet that she’s kind of my favorite of the outside cats–although I like them all. We understand there is a risk to outdoor cats but Madeline wouldn’t have been happy confined inside. She was so woods-wise and wary that I’m hoping she is just out roaming and will eventually return, although I know there is a possibility that she came to a bad end. 😦

This afternoon, I set up the bird feeders but I did not fill them. I want to make very sure the bears are hibernating before I fill the bird feeders. Since we get mostly woodpeckers, I’m thinking that this year I will only put out the suet–no seed. I love watching the deer and turkeys come to the feeders to eat the seed, but they gobble it down quickly and buying so much seed gets expensive. More importantly, I’ve learned that it’s not very healthy for deer or turkeys to gather at the feeders. It can spread disease. We plan instead to plant grasses that they will enjoy.

We still need to figure out how to protect the apple trees from the deer this winter….