The Week So Far 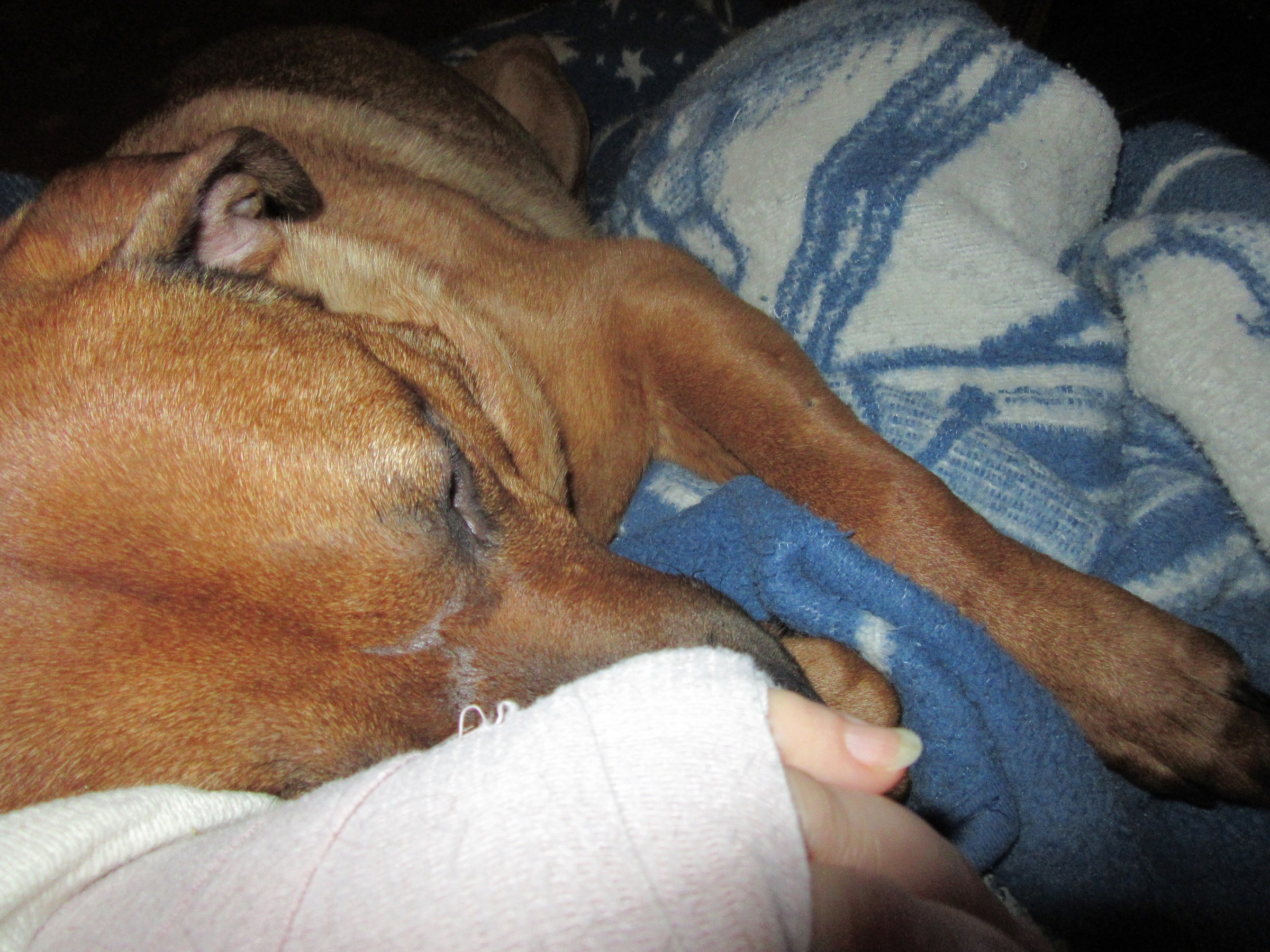 The week is slowly passing. My fractured left arm feels as lifeless and useless as a block of wood–only unlike wood, the smallest movement is excruciatingly painful. My hand feels swollen and my fingers sticking out of the bandages look like fat sausages. I can’t bear any weight on my arm and in order to move my arm, I have to pick it up with my right hand. EJ made a sling out of an elastic wrap bandage last night to support my arm so I don’t have to carry it when I get up.

I have been sleeping–uh, dozing–in my recliner because I wasn’t sure if I would be able to get out of bed, especially with the pets sleeping on or near me. Hannah and the cats still like to sleep on me in the chair, but it is easier to shift them or push them off me and to protect my hand when I’m in the chair.

I was particularly worried about how I would manage with Hannah who usually wants outside frequently, often likes to play, and her movements are puppyishly enthusiastic. However, she’s actually doing very well. She’s not asking to go out or play much when I’m alone with her. She insists on sleeping on me most of the time, but I’m able to protect my arm from her movements.

I’m trying to do whatever tasks I can. I can manage to dress myself, and wash my hair one-handed at the kitchen sink in the morning. Stuff like that. There are a lot of things I can’t do. Some of the smallest things are the most frustrating–like being unable to scratch my right arm when it itches because my left hand is useless. It is amazing how many big and small tasks require two hands. The guys tell me to let them care for me, but it’s very difficult for me because EJ’s back always hurts, and he is really tired when he gets home from work at night, and he is still not totally recovered from being sick. And JJ is busy with school, work, and his girlfriend. I hate telling them to do more than they absolutely need to do. I really feel like a burden.

EJ and JJ are doing great though. EJ feeds me and the pets, takes Hannah outside, and lets the ducks out in the mornings before he goes to work. JJ gave the poultry fresh water and took Hannah outside in the afternoon, and also helped me with supper and dishes. JJ won’t be able to do much on days he works (Friday through Monday) but EJ will be home on weekends. Oh, JJ is getting promoted to SGT at work. The current SGT is being suspended because of sexual harassment complaints. This is the same guy who said inappropriate things to JJ when he (the guy) first got hired. This guy had been fired from other jobs and charged with sexual assault a few years ago.Those charges were dropped when the victim didn’t show up at the arraignment. JJ’s promotion might be only temporary if the guy returns to work after the suspension period is over.

JJ said this morning that he felt very nauseous. He went to school anyway. I’m hoping he isn’t getting the flu. The flu would REALLY complicate our lives. I hope none of us get sick until after my surgery at least.

← A Patch of Ice
The Bathroom Blessing →

7 Comments on “The Week So Far”