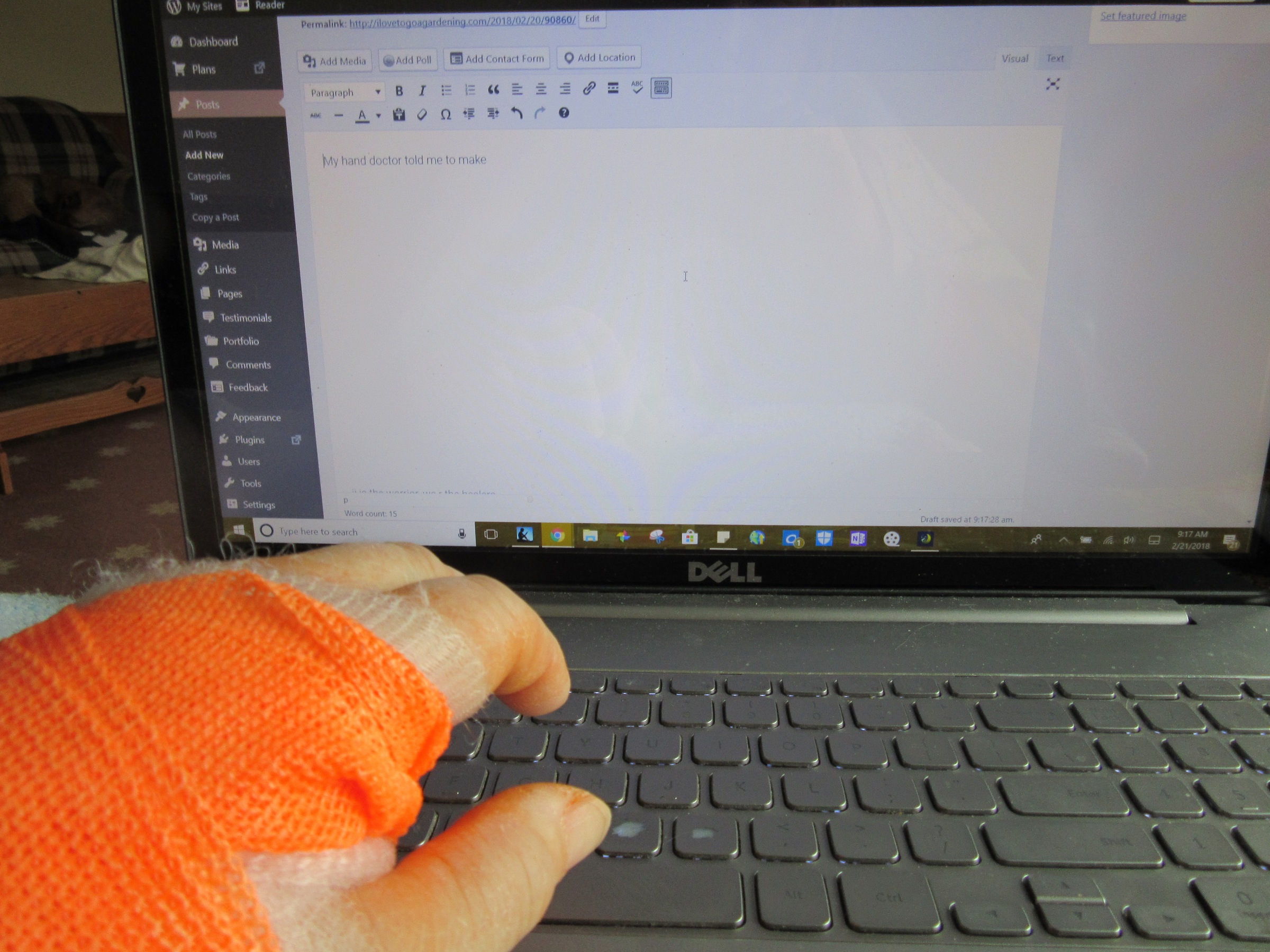 My hand doctor told me to make sure I move my fingers so they don’t stiffen up so I am trying to type two-handed. I think that typing provides good finger exercises. But my left arm feels like a heavy block of wood and I don’t have the flexibility or freedom of movement that makes it easy or comfortable. My left hand is still mostly just pecking at the keyboard.

I hate this cast, although it is a pretty color and both EJ and JJ signed it last night. EJ even drew cute cartoon animals on it. But I never knew how  rigid, sweaty, itchy, and uncomfortable a cast could be. I am trying very hard to imagine my cast being like Wonder Woman’s golden bracelets, which can repel bullets, but although my cast does repel threatening dog and cat claws, my arm seems to have a mind and an imagination of its own. My arm feels imprisoned and claustrophobic and it wants to growl and smash the cast off like the Hulk breaking out of restraints. I have to keep calming my arm down, encouraging it to patiently endure and not smash itself out of the cast. I keep telling myself, “Be Wonder Woman, not the Hulk.” Only two weeks. I can do this. GRRRRR

I will have greater understanding and compassion now when I see a person in a cast. There are many things we really don’t understand until we experience them. EJ says that he doesn’t notice me having much of a bad attitude. I’m actually able to do at least a part of most of my chores. I’m mostly writing about inner frustrations and discouragement to highlight how very difficult life can be for those suffering pain or illness. Most of the time, these dear people present a cheerful face to the world, never mentioning the pain, discouragement, and difficulties they endure every day. I know that when someone asks EJ how he is doing, he usually says that he is “good.” He doesn’t tell everyone how much chronic pain he suffers from his back injury.

JJ and his friend’s application for the apartment has been accepted so he will be moving out in a few weeks–he is not sure of the date. This will be a new season for us all, but I’m excited about this new adventure. I think JJ is more than ready for more independence. I also think that it will be a valuable learning experience. For example, he will learn more about how much household expenses cost, he will learn that he can’t afford a lot of extras, and he will learn the effort it takes to keep a home clean, living with a roommate instead of parents, and other such things. There are no magic baskets or tables like in this humorous video:

The video is funny, but although a person might think he knows some of these things, there are some experiences and levels of maturity a  person can’t gain until they move from their parents’ house. Honestly, I think most guys could learn a thing or two about cleaning up after themselves. It doesn’t just happen. I love my son deeply, but I look forward to not having battles about dirty clothes on the floor and lights not turned off. Enough said.

I will say that while I didn’t have a problem keeping a home clean when I moved into my first apartment years ago, I learned a lot about independence and budgeting, and I matured a lot. I’m glad I had the experience before getting married.