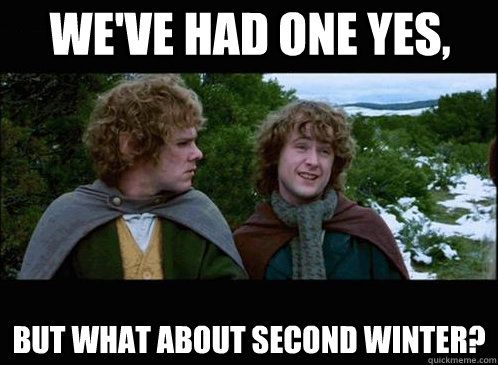 Almost all our snow had melted away during days of temperatures reaching into the high 30s and 40s. It was really beginning to feel like Spring, even though I know that Winter likes to toy with us in March, dangling Spring-like days in front of us and snatching them away when we dare to hope that Spring is here to stay. I try to remind myself that Winter is still lurking about and not to get my hopes up in March or April–I’ve even seen snow in May–but I always fall for Winter’s cruel tricks.

It’s been snowing quite steadily since Tuesday. Our ground is again covered in several inches of snow. Second Winter is here. Ugh. The snow isn’t all that bad, but I don’t look forward to another round of treacherous ice when it melts and refreezes.

My days are spent doing my chores, watching Amazon Prime or Netflix videos, napping, (I don’t sleep particularly well at night), and doing the exercises that the occupational therapist gave me to stretch tendons and regain movement in my hand. Four times each day I have to do the exercises, repeating each exercise 10 times. It takes me at least an hour to complete each session so I am spending at least 4 hours each day doing the exercises. At my first visit with the OT on Monday, I could barely straighten or bend my fingers. After a couple of days of the exercises, I am doing better, although I’m struggling with the last of the exercises in which I have to bend my wrist forward and back. I think it’s because my wrist is still quite swollen, as are the large knuckles at the base of my fingers.  My arm feels lumpy where it’s swollen. I’m kind of started skimping on the last exercise (bending my wrist forward and back) because it’s too sore and I can’t make my wrist bend. Yesterday I tried to video the exercises I have to do:

I always assumed when people broke a bone that after the cast came off, they were pretty much as good as new. I never realized how much they were affected by the break, how little movement they had, how much work it is to regain mobility, or that they don’t regain full mobility. I will never again look at a person with a broken bone with ignorance. I will empathize deeply with them.

This afternoon I have my second session with the OT. (I’m hoping JJ remembers to take me. I have sent him a reminder or two.) JJ’s schedule is more flexible than his Dad’s which is why he takes me, but we still have to work around his college classes, work, and his personal life. I don’t want to impose on JJ so I told him that maybe we can schedule future appointments for later in the day so that he can take me to his apartment afterwards rather than drive me all the way home, and his Dad can pick me up from there when he gets out of work. The doctor/OT, JJ’s apartment, and EJ’s company are all about 10 miles from each other so it would save time if EJ could pick me up.