We had a very busy weekend.

On Saturday we met a friend at a town that was between our house and his, although he had a longer drive then we did. He chose that particular town to meet because he wanted to go to the new sporting goods store.The guys browsed through the store looking at “guy stuff” while I trailed behind, and then we went to a restaurant. After our meal, we said our goodbyes and EJ and I stopped at Lowes to buy some new locks for our doors.

EJ had wanted to change the locks on the doors since we moved into our house almost 3 years ago. We had never been given keys to the outside door in our living room and we felt it was time we did. We wanted all the doors to use the same key for convenience sake, so we just bought all new locks. The new locks are much better than the old ones. EJ spent Sunday putting them in. He got all the locks in; he just needs to put in another deadbolt or two.

EJ took Monday off work as a vacation day because we had a lot that needed to get done. First on our To-Do List was dropping Hannah off at the vet shortly after 8 a.m. to be spayed. She also had a hernia that needed surgery. The vet did both at the same time.

A few hours later, EJ drove me to my appointment with my hand surgeon. I always have x-rays done at the beginning of each appointment so the doctor can see how my hand is healing. She said my hand looks really good, and that I will not need to return unless I feel I am having problems. She let me take photos of my x-rays. You can clearly see the metal plate in my wrist. It’s kind of gross, but also rather interesting.

I told the doctor that my hand still feels swollen and stiff and I asked how long it would take for it to get back to normal. She explained that there actually is only a tiny bit of swelling but because the fingers are small, the swelling feels much more noticeable. If there was this much swelling elsewhere in the body, she said, a person wouldn’t even notice it. It can take months for the hand to completely heal. Typically it takes twice as long to regain strength in the hand as it was supported in the cast/splint, which means that if my hand was in a cast/splint for two months, it would take an additional four months to regain strength. Sometimes it can take as much as a year. Bummer. A split second fall has had long-term effects.

The doctor had me bend my wrist/fingers and said that if I had a good home exercise program worked out, I wouldn’t need to have more therapy. She said that since I had a therapy session scheduled after my appointment with her, I could keep it just to get the last bit of benefit from it.

My hand therapist did an assessment to see how my hand was doing. I had worked hard on my wrist exercises, but did not “wow” her as much as I had hoped. Since I have trouble turning keys and door knobs and I struggle to cut my food, she added more exercises to my home workout. She gave me a rectangular piece of foam to pinch and squeeze to strengthen my grip. I also have to hold a hammer as I slowly turn my hand palm up and palm down. Finally, I have to do a couple exercises with a one pound weight. She said I could use a 16 oz water bottle (filled) for the one pound weight, but I find the shape difficult to hold so I ordered a cheap weight on Amazon. It will be here Wednesday, which is sooner than I would be able to get to a store to buy one. 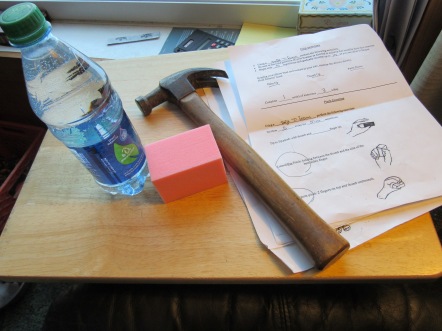 I was given additional exercises to do at home

I was given additional exercises to do at home

The doctor told me that there are no longer any restrictions on what I can do with my hand, as long as I can comfortably manage it. My therapist said to make sure I don’t do anything that could harm me: For example, don’t try to carry a pan of hot water with my injured hand or climb a ladder because I might get hurt if my hand suddenly gives out.

My therapist said that if in 2-3 weeks I felt I wasn’t making progress or if I just wanted her to assess how I was doing, I could call her and she would get me back in. It is frustrating that it takes so long to get mobility back into my hand. Most of my day is spent doing hand exercises. 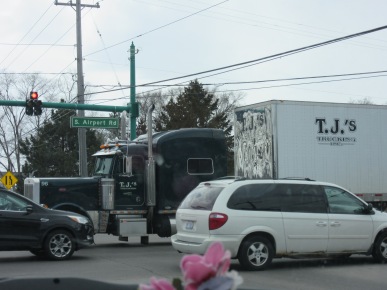 After my therapy session, we zoomed back to pick up Hannah from the vet. The hand doctor/therapy office is about 40 minutes from home and the vet is 20 minutes from home in the other direction. As we drove along, I saw a truck with my initials. I told EJ, “I bet you didn’t know that I owned a trucking business.”

Hannah’s surgery went well, but she looks and acts very subdued and not like herself at all. She didn’t even want to eat last night, which is unheard of. She vomited in the night; I got up and cleaned it up. Hannah is quite talkative and this morning she growled softly with pain until I gave her her pain medication. She slowly ate a few kibbles, but didn’t empty her bowl until a few hours later. She’s guarded her bowl until it was empty, growling if the cats even looked at it. I moved it near my chair so she could lay at my feet and guard it. Poor dear.