Yesterday was another very beautiful day with sunshine and blue skies…and no rain.

Once again, I had to turn on the sprinklers in the morning after taking caring of the various animals. My backyard method is the same every day: I fill up the ducks’ drinking water and pool, then water the garden, then move the hose and water the potatoes at the bottom of the hill. The front is more complicated. My method is that one day I set up the sprinklers at the apple trees at the top of the hill, move over to the cherry trees across the driveway, then move the sprinklers back across the driveway to the evergreen trees at the bottom of the hill. When I finish watering, I leave the hose there. The next morning I start at the evergreen trees, then water the cherry trees, then finish with watering the apple trees. So one day I start at the apple trees, the next day I end at the apple trees. Up and down one day, down and up the next, and do it all over again.

The loggers at my Orc Neighbor’s place start their work at 6 a.m. I took a video yesterday to show how loudly their machines are, which I hear hour after hour, day after day:

For some reason the loggers quit at mid-afternoon yesterday. I wondered if their job was finished? That would be joy! But when I took Hannah for a walk down the driveway, I saw a huge pile of logs stacked up in the field. Today I hear them working again, but the noise is more muted. Maybe they are working further away into the forest? Whatever. The noise is less loud annoying today–a murmur instead of a roar–although I still hate the thought of all the trees being cut down and the wildlife babies at risk.

I did a little weeding yesterday. I notice a few milkweed plants are growing in the flower garden. I’m leaving them there for the Monarch butterflies. My philosophy of gardening is that a plant is not a weed if it is where I want it to be. I think it’s funny that one is a treasured flower in one region is considered a weed in another. I remember that not long after one of my Michigan friends married an Iowan farmer, she bought some morning-glory plants for her garden. When her husband discovered this, he was horrified because he killed morning glories as an invasive weed on his farm. LOL.

Whenever I walk Hannah down the driveway, which is several times a day, I enjoy watching for wildflowers blooming. I noticed that there are a lot of dandelion-type flowers growing among the milkweed on the hill. Their yellow was very cheerful among the green. I know a lot of people dislike dandelions and spend a lot of money on chemicals to eradicate them from their lawns. I’m not sure why it’s so important to have a dandelion-less lawn. I’ve always loved dandelions. They are the first flowers that children pick to bring to their Mommy. They also are a nutritious food (if they aren’t covered with chemicals). And they are a good source of nectar for bees, which are struggling to survive.  I found this informative cartoon from a website called “Mother Nature News”: 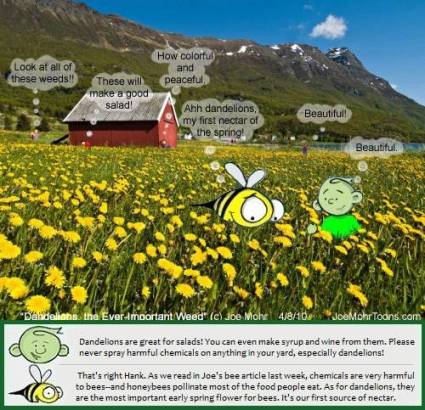 I’ve noticed when I shut the chickens in their coop every evening that all the hens are gathered around Sassy, our alpha rooster. Well, all except one. One hen always sits at the far end of the roost next to Captain AmeROOca, our other rooster. I thought, well, that’s nice of Sassy to allow Captain one of the hens in his harem instead of keeping them all to himself. Sassy is a very thoughtful leader who brings balance and harmony to the coop.

We woke to dark cloudy skies and a chance of rain this morning. The forecasts for our area has been up and down all summer, with slight promises of rain that evaporate to nothing. However, shortly after EJ left for work this morning, we actually got some rain! Yay! I quickly closed the windows EJ had opened and then went back to work because I had another night of little sleep and was very tired. I was dimly aware of a little thunder, but not loud enough, or long enough to wake me from my sleep.

Because I slept, I’m not sure how long or hard it rained, but I know it was enough that I didn’t have to worry about watering the gardens or trees. There were dark cloudy skies when I woke, and it was wonderfully cool and breezy today. The temperatures did not reach 70. About mid-afternoon a few large puffy clouds sailed slowly across the blue sky and disappeared into the distance.

This morning when I took Hannah Joy outside, she quickly pounced on something in the grass and ate it. I think it was a dead mouse or something, probably killed by Madeline. I could hear a crunch, crunching (bones?) as she ate it, and it looked like a tail was hanging from her mouth until she slurped it down. Hannah eats everything, probably because she was starved by her previous owner. Usually when Hannah grabs something she shouldn’t I try to pry it from her, with resistance from Hannah. However, there was no way I was going to try to retrieve a dead, crunched critter from her jaws. I felt sick. Yuck!

Today has been a very sleepy day. Tomorrow will be busier. It is grocery day.

3 Comments on “Showers of Blessing”