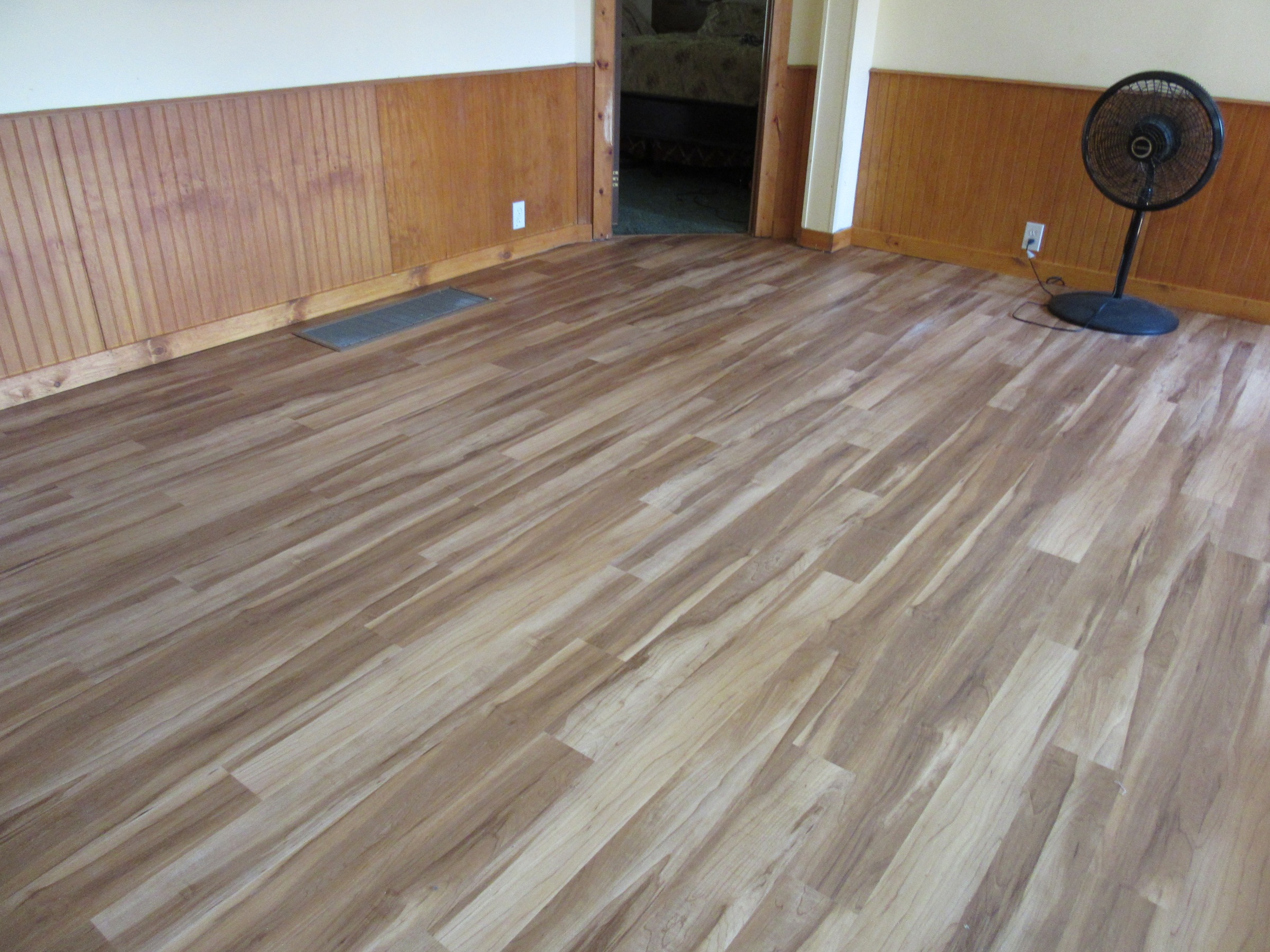 Yesterday evening EJ made sure that there were no staples or anything sticking up from the living room floor, and then he painted the stains with Kilz orderless stain blocker. I helped him paint the first coat on the floor, but I was so tired from my hard work this week panting my sign and then mowing the lawn that I didn’t help him with the second coat.

After the stains were covered, EJ and I relaxed in our recliners, which were moved into the kitchen in preparation for the installation of the floors. EJ had a large mug of wine which he diluted with grape juice, which he often drinks at night. I sometimes have a small mug of wine/juice too, but sometimes it feels to acidic in my stomach so I don’t always drink it. EJ set his mug on one of the TV trays that hold our laptops. Our cat Kee-Kee jumped onto the tray and knocked the full mug into my lap. We jumped up, cleaned up the spill, and I changed clothes, putting the wine-covered ones in the wash. EJ filled up his mug again and set it on my TV tray behind my laptop, and when I moved my computer his mug spilled again. It didn’t spill on me this time. I think it probably went on the floor. Once again we jumped up and cleaned everything off. He filled up his mug again, but this time he held on to it and he was able to drink it.

The floor installers arrived this morning at 9 a.m. There was an older man and a young guy. Later the older man’s wife showed up to help.

I put all the cats in the pantry/hallway and shut the pet door so they couldn’t get out of the house if the door was left open as the workers went in and out. I shut Hannah in our bedroom to keep her out of the way–and I wasn’t sure if the installers liked dogs or how Hannah would react to strangers in the house. After a bit, she got out when an installer opened the door to cut away some of the carpet in the doorway. Hannah wiggled up to all of them for attention, which they lavished on her. We still had to shut her up in the bedroom or hallway occasionally because the noise of the saw and staple gun really bothered her. Also, she was a distraction. But now an then I let her out, and a few times I took her for a walk down the hallway.

The installers quickly laid the luan on the floor. Once that was stapled down, they began laying the laminate planks. They finished by putting all the trim back on. They got the flooring done in about six hours. I’m really glad we didn’t try to do it ourselves. The floor is beautiful. Without the carpet, the room looks much bigger.

After the installers left, EJ and I moved the furniture back into the living room. We tried a different arrangement–because it’s nice to have a change every now and then. The installers had moved the couch over in front of the window when they had to put the flooring where it had been. We actually liked the way it looked there so we left it there and moved our recliners where the couch used to be. However, the couch blocked part of the window so we couldn’t enjoy the view as much. So we moved the couch over to where our recliners used to be. We can enjoy more of the view now, although with our recliners across the room, we still can’t see as much as we used to. However, I will be able to see if the deer or turkeys walk along the edge of the forest or come up to the windows, and I have a good view of the bird feeder post so I am content.