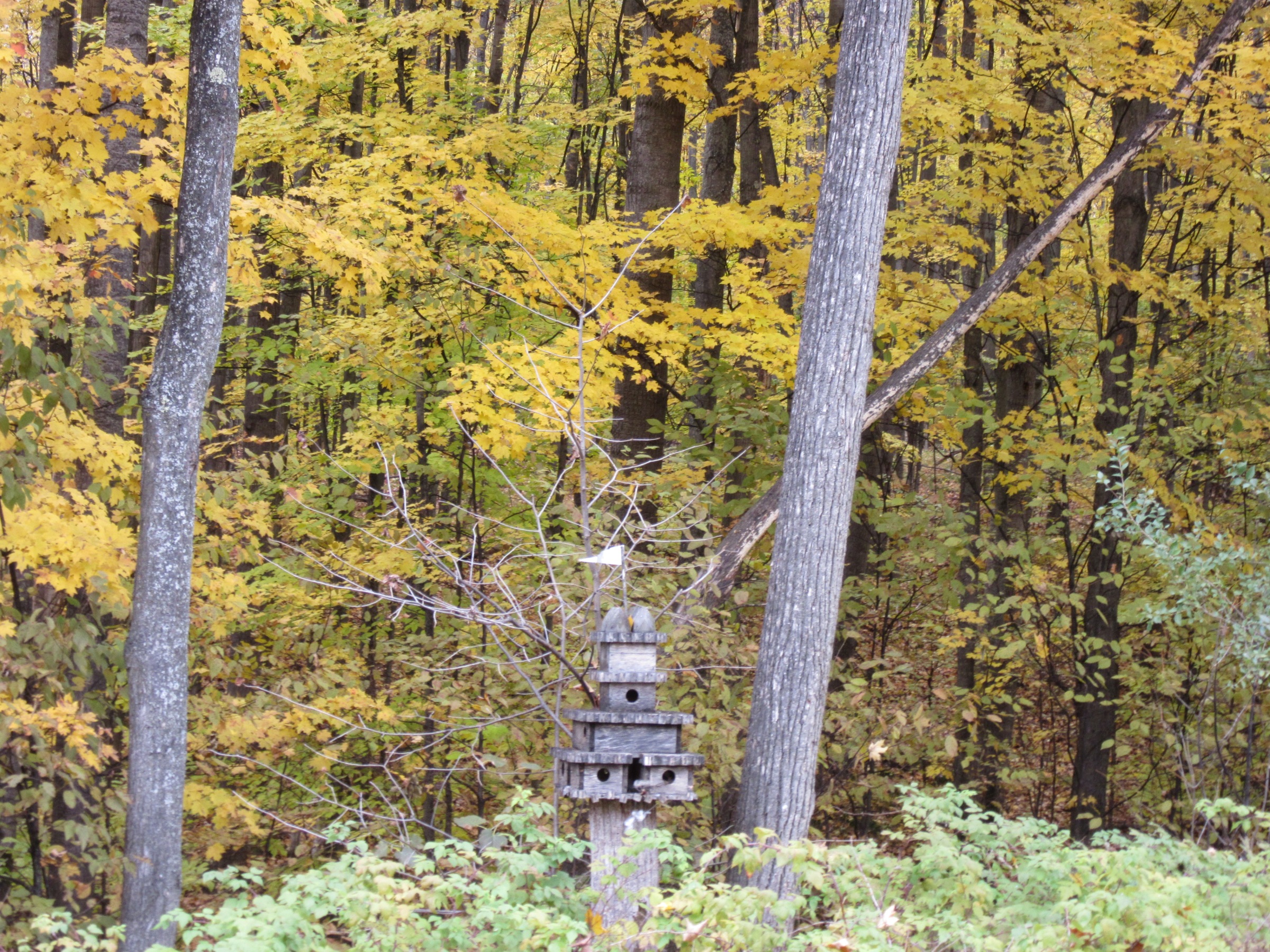 We’ve had some very autumnish days. Tuesday was blustery and there was a lot of rain in Northern Michigan, although most of it missed us until night. Yesterday was so chilly that I didn’t open the windows, as I usually do in the mornings after I’ve fed all the animals. When EJ got out of bed, he exclaimed, “What? The windows aren’t opened?” and he opened them all. But it was so chilly–in the 60s (F)–that over the next hour or two, I quietly closed them one by one. I wore a sweater in the house and a jacket outside. Brrr.

I finished my Kitchen Garden a couple days ago. I’m not concerned about filling the empty boxes with dirt until next Spring (unless I find dirt on sale) since it’s so late in the season. EJ is considering putting up a wooden fence to keep out the deer, although I’ve read that deer don’t like aromatic herbs such as sage, rosemary, basil, mint, or lavender. I think a decorative fence would make the raised beds–made with pallet pieces and wooden boxes–look nicer, although I wouldn’t want anything that blocked the sun or the beautiful view out the window.

Yesterday afternoon I got out the fence post digger, intending to move one of the birdhouses a little closer where it isn’t blocked by a tree. The previous owners left behind an awesome castle birdhouse, fastened to a stump at the edge of the forest, surrounded by thorny berry bushes like Sleeping Beauty’s castle in the fairy tales. I looked for the castle as I considered where to relocate the other birdhouse because I wanted to make sure they weren’t too close. Only….I couldn’t find the castle! I stared in confusion at where it was supposed to be, and it wasn’t there! I didn’t see it on the ground either. It was just gone–poof–as if it had never been. ! I cried out in horror and grief,

“What evil sorcery has vanished the castle?!!”

Ok, I didn’t really say that. I only thought of that cry just now. But I felt as if sorcery had made the castle vanish, and I would have said it–or at least thought it–if I had thought of it at the time. I pushed my way through the thorny berry bushes like a prince rescuing a princess. Sadly, I found that the stump on which the castle had rested had toppled over and slid a short distance into the ravine, taking the castle with it.

I went into the house and put on my knee-high work boots. Then I went into the garage and found a long length of twine, which had been used to hold a strawbale together. I also got out a straight-edged shovel to help me keep my balance at the edge of the ravine, as well as to use to pry the castle off the stump. Oh, and I grabbed my phone just in case I fell into the ravine and needed to call for help.

I went back through the berry bushes to the fallen castle. I thought about tying the twine around the castle to prevent it from sliding down further and to help me pull it up. However, I couldn’t find a good place on the castle to tie it to, so I didn’t use it. I was able to retrieve pieces of the castle, and then pry the base off with the shovel. I took the pieces to the patio table on the deck. The wood is decayed and I don’t think it can be saved. I am sad. I loved that castle. It added such an enchanting bit of whimsy to our forest. EJ says he can build another, but we have so many tasks that NEED to be done that I don’t think he will have time to build a castle.

I am grieving the loss of my beloved castle. 😥