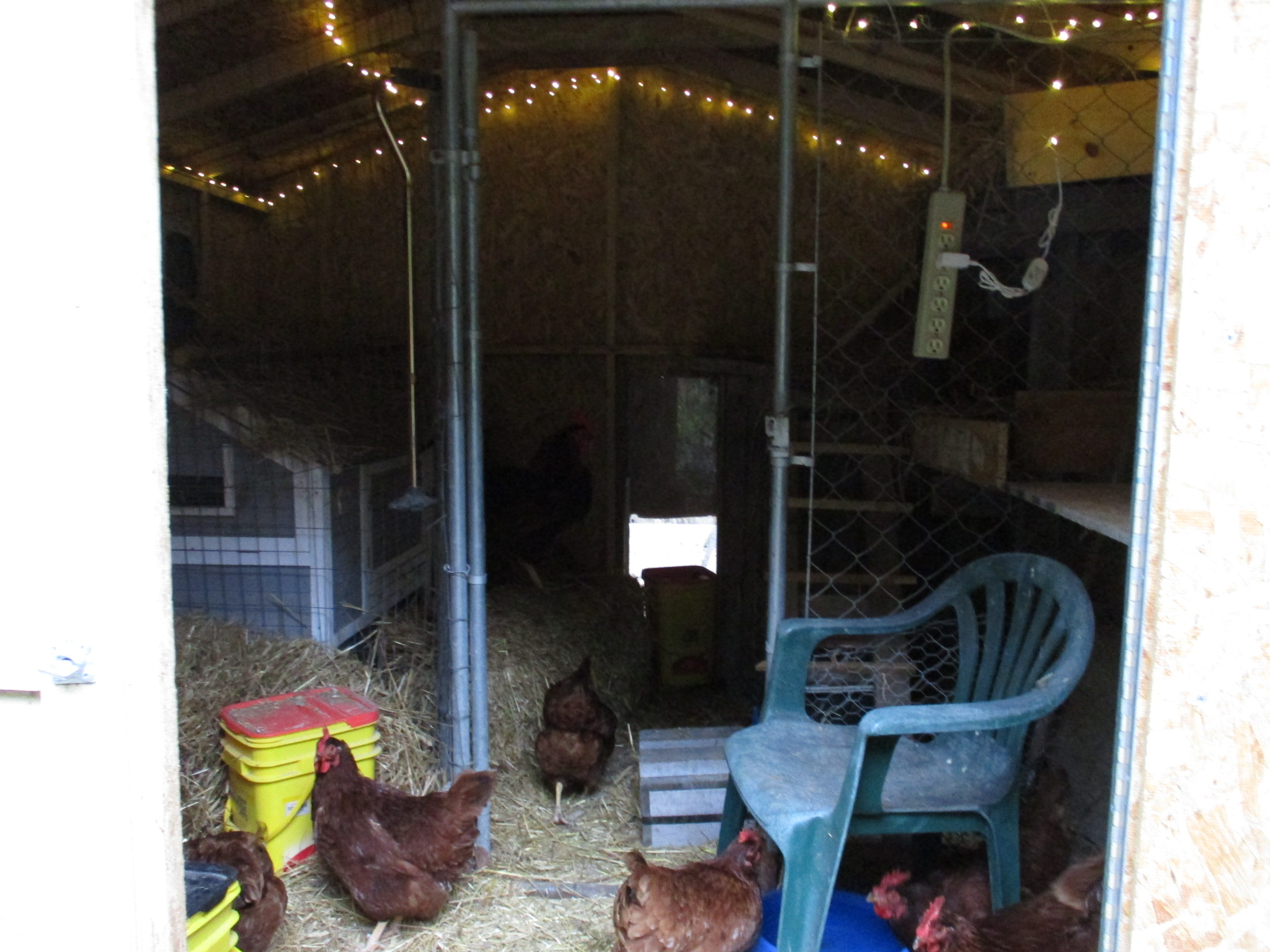 Wow! It’s already the end of another week! This week has gone by very fast!

The weather has gone up and down this week, as it usually does in autumn, with one day very warm t-shirt weather and the next day chilly jacket weather. It rained pretty much every day, although we didn’t get the amount of rain or storms that they did south of us. This morning started out chilly so I wore a sweatshirt, but then it warmed up so I switched to a t-shirt, and now it’s cooling down, so I put on a sweater. Changeable weather is why I usually dress in layers.

Our sunflowers are finally blooming. With our late Spring and planting, I was afraid they wouldn’t have time before the frost came. I planted different kinds so they are different colors and heights. Some are at least 15 feet tall! Sunflowers always make me happy, so I’d like to plant more next year. 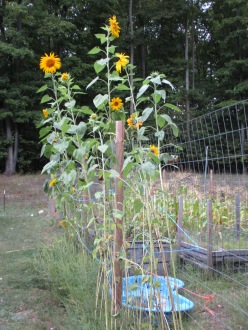 Last Sunday one of our customers stopped in to pick up a few dozen eggs. He brought along his almost 90-year-old father. It was fun talking to them both, hearing their stories. I really enjoy meeting my customers–both the egg and crochet customers.

Earlier this week EJ built a sturdy shelf in the coop for the cat dish and their bucket of food (which, like everything else, we store in a kitty litter bucket). With ten chickens, ten chicks, and two cats (three if Annie ever is willing to join them; perhaps this winter), floor space is at a premium. Shelves use wall space without taking up floor space. I put an old plastic chair near the cat shelf so the cats can easily access the shelf. I put the chickens’ food in the corner under the shelf and the water dish under the chair to protect it from straw. The cats immediately leaped onto their shelf. I think they like it. 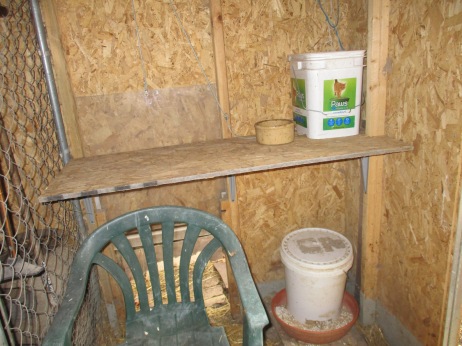 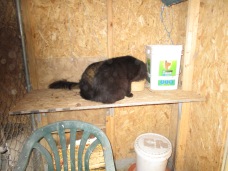 The cat shelf is above the small animal door. EJ also made a pulley so I can easily open and close the door.

I’ve finished apple placemats and coasters that a friend order from me. I modified a pattern from Star Wisps. EJ stopped at the post office on his way to work Wednesday and mailed it for me. These are both available at my e-store.

We had a couple of errands to run this morning. Well, actually it was almost noon by the time we left. Meijers, a large grocery store something like Walmart, sits on a large property with a lot of vacant land around it. I was looking at the large flock of geese–at least a hundred, maybe two–that were gathering there, probably in preparation for their migratory journey to the south for the winter. I suddenly saw a flash of red color–it was a red-tailed hawk flying low among the geese! I’ve mostly seen hawks flying overhead or sitting in a tree. This is the first time I’ve seen the red-tail so clearly. It was pretty cool!

With the money I made from the apple placemats/coasters, I bought a string of lights to put in the chicken coop from Amazon. I light the coop with Christmas lights in the winter because they are cheap, low wattage, low heat, and we don’t have to install wiring. I had to replace the rope lights I bought last year because I had to plug/unplug them every time I wanted them on/off, and the thin wire attaching the rope to its power source got fatigued and broke.

The new lights arrived this afternoon and I immediately went out to the coop to put them up. I was a little disappointed because I thought I was buying rope lights similar to last year’s, encased in heavy plastic tubing. Instead, these lights were tiny and the wiring very small. But as I hung them in the coop, I decided that I liked them after all, because I could easily twist the wire around nails to keep them taut so the chickens won’t get tangled in them. An advantage of these lights is that they have an on/off switch, as well as a remote, so I won’t fatigue the wiring. I also can make them brighter and dimmer, and there are eight different settings so I can make them flash in different ways. The chickens, cats, and I can have a party if we want.  🙂

I think the Christmas lights make the coop feel festive and friendly. These particular lights are called “fairy lights,” which I think is absolutely appropriate for a coop in an Enchanted Forest.