Years ago, I bought a couple little cacti at a store–probably Walmart. They were just tiny little plants in tiny little pots when I bought them, but over the years they have grown taller and taller, and I’ve had to transplant them into bigger and bigger pots. It was time to transplanted the biggest cactus but I didn’t want to buy an expensive pot so last week I researched cheaper alternatives. I searched various stores on-line, looked at Facebook marketplace, considered repurposing something we already had, or buying something less expensive that I could turn into a pot. Then EJ happened to notice that one of the pots in our raised garden was bigger than the current cactus pot and would do nicely. It had held a fruit tree we had bought one year. Yay! We didn’t spend any money at all!

It was not easy to transplant the cactus. I had to loosen the dirt around it and lift it out without breaking the cactus. I did end up breaking off a small piece, but it wasn’t one of the long…uh, whatever you call it:  “branch”? I’m surprised I was able to safely move the cacti from our old house to our new house, but we managed it.  I used to take the cacti outside in the summer, but they have grown so large and heavy that I don’t try to move it anymore. I don’t know what I will do if they grow as tall as the ceiling. I guess I will worry about that when it happens.

I usually shut the chickens and cats safely in the coop at twilight. The chickens always go into the coop on their own. I just count them to make sure they are all in. Usually, Millie and Theo are either near the coop or they come running when I go out. Annie prefers to stay outside. We have a couple old doghouses in the garden for shelter. I’ll encourage her to go into the coop at night when it gets cooler. One evening Theo was late to the coop, and he didn’t come running when I called, so I shut the chickens and Millie inside. I went out a bit later to see if Theo had returned. He had, so I put him in the coop. EJ was working in his garage, and I saw the lights shining on the sunflowers. I thought it would make an interesting photo, so I took a couple. I used the flash to highlight the sunflowers.

My birthday is in early October. I think the best gifts are memories, which I enjoy sharing with EJ. For my special birthday gift, I always choose a drive through the beautiful autumn countryside with spontaneous stops at interesting places. One year we happened to see a sign for free chair-lifts at a ski resort and was able to enjoy autumn colors from above. For a couple of years, we drove along Lake Michigan on M-22 and also on M-119 through the Tunnel of Trees, both very beautiful scenic drives, especially in the autumn. We’ve also driven up to the Mackinac Bridge, which connects Michigan’s upper and lower peninsulas. We love visiting the beautiful bridge. Last year we drove on the Pierce Stocking Scenic Drive through the beautiful Sleeping Bear Sand Dunes.

It’s always fun to try to figure out where I want to go for my birthday. I considered going this year to Hartwick Pines State Park, an almost 10,000-acre state park that has 49 acres of old growth pine trees. I’ve always wanted to visit there; it’s on my “bucket list.” The drive there and back would be beautiful, although evergreen trees don’t dress themselves in beautiful colors. I asked EJ for other suggestions–did we want to go to Hartwick Pines, revisit our favorite drives, or try something new? EJ suggested we go look for elk at Pigeon River. Pigeon River Country State Forest and Elk Range is the home of the largest free-roaming wild elk herd east of the Mississippi River. The best time to view elk is during the fall breeding season. In September and October, they are feeding in open grassy areas and the bulls, or male elk, are especially vocal. This is the perfect time of year to go looking for elk!

I’m so excited. I’ve seen elk at zoos. I even fought with an elk at a drive-through wildlife park in Ohio years ago. We had bought a bucket of food to feed the wildlife, but shortly after we entered the park, a big elk stuck his head through the window of the car and grabbed the bucket EJ was holding. I was so disappointed that we had no food to give to the rest of the animals. Since the entrance fee was so minimal, we decided to drive through the park again. I said that this time I was going to hold the bucket. I was not going to let an elk steal it. But shortly after we entered the park the second time, the same elk put his head through the car window and grabbed the bucket. I was determined that I would not relinquish the bucket! The elk and I had a brief tug-of-war until EJ pointed to a sign that warned people not to fight with the animals. I suddenly realized that I was fighting with a wild animal that was bigger and stronger than I was so I let go. The elk won–twice! It’s a funny memory that we laugh about. Not everyone can say they fought with an elk. I think I sometimes have rare experiences. For example, I am one of two people who have broken the USS Enterprise–Captain James T. Kirk is the other one–but that’s another story for another day.

Ok, back to my topic: I have never seen an elk in the wild. I think seeing one in the wild is a very different experiencing than seeing one in a zoo or wildlife park. I’m really excited. We tend to go on several adventures in the autumn so Hartwick Pines is not off our list. We might still go to it or we might wait for another season.

EJ has been working especially hard over the last month or so organizing his garage. He is now working on creative projects. I’m so glad to see his creativity coming back. Downstate he worked long hours, often 12-16 hours (or more), seven days a week,  for weeks or months at a time. When he did finally get a day off, we often had to work on the house. The long days tired him. He didn’t have the energy to “be creative.” But now here in Northern Michigan, his creativity is returning. I love to see it!

I’ve been busy crocheting. I recently completed an order for apple placemats and coasters and now I’m working on an order for six tiny mice. I’m making all the pieces for all the mice and then I will sew them together. I have a bowl filled with little mice pieces, which sounds rather macabre. But they will be cute when I get them all put together.

Hannah Joy often sleeps on my lap as I crochet. I couldn’t resist taking a couple of photos of her lovably goofy face when she was asleep on my lap. LOL. 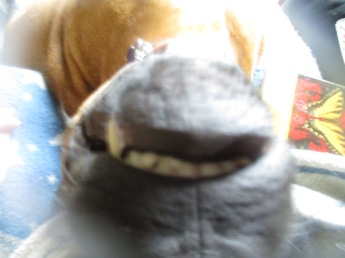 Speaking of sleep….Hannah has already gone to bed and it’s time that I head to bed too. Goodnight!