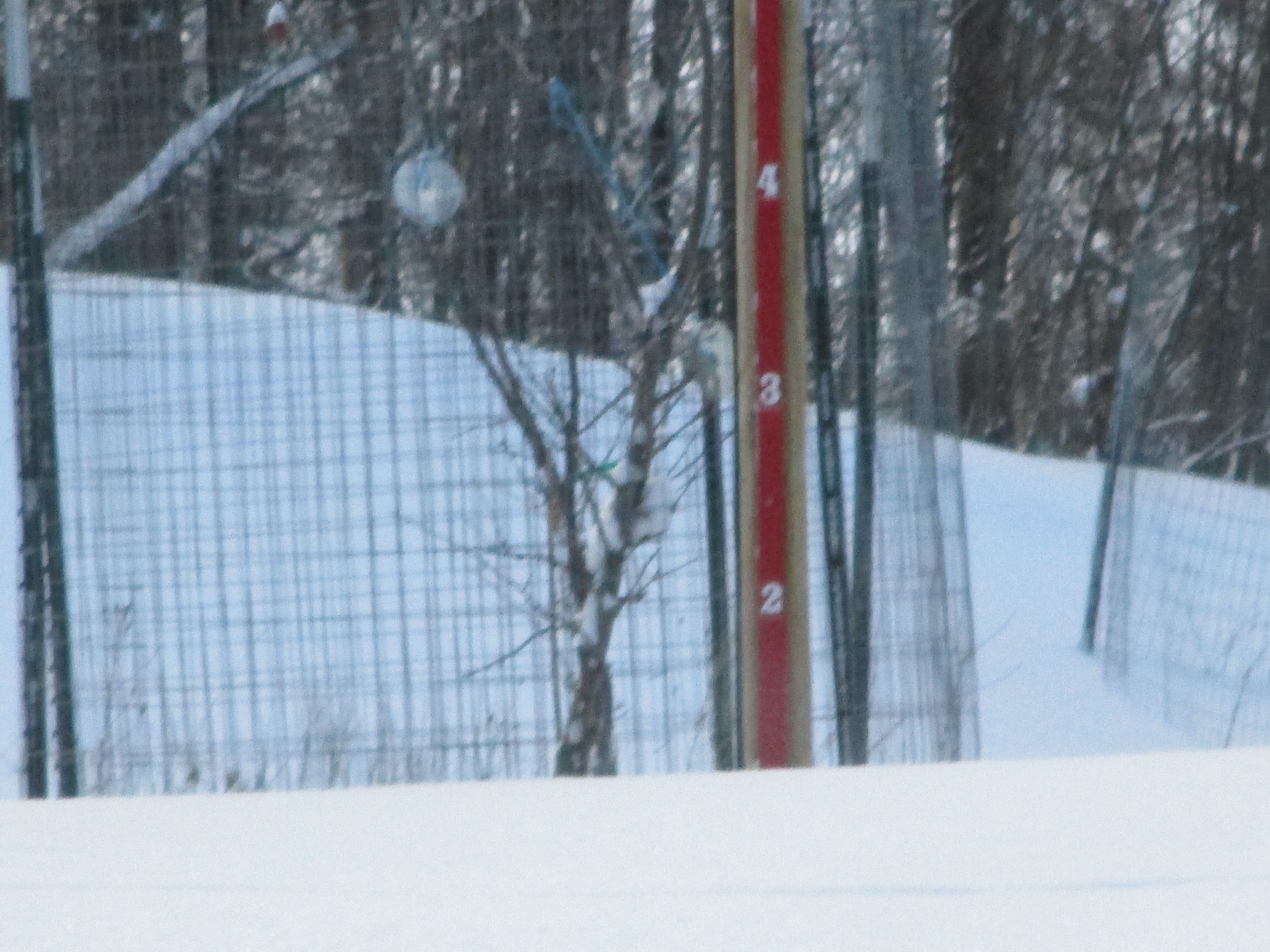 A snowstorm was forecasted for both last weekend and this weekend. Last weekend’s storm never appeared–although I read that the middle and southern parts of the state were hit with a pretty bad ice storm. Although I think that ice storms are remarkably beautiful, they cause driving treacherous and cause a lot of damage so I’m very glad we were spared. Snow is easier to deal with than ice.

This weekend’s snowstorm did hit us. As near as I can figure it, we now have about of foot of snow on the ground, which I don’t consider all that much for a northern winter. I think we’ve had quite a mild winter this year. So far. I really enjoyed sitting in my chair yesterday watching the snow fall and the various wildlife visit the feeders. We often have titmouses (titmice?), chickadees, and woodpeckers visit our feeder, and occasionally goldfinches and cardinals. We also have a family of Blue Jays that frequently visits. I assume that they are a family because six of them always arrive in a group.

This morning I think that, maybe, I saw a bluebird checking out one of the birdhouses. That really surprised me because I didn’t think they came until Spring. Maybe the bluebird’s visit–if that’s what it was–is a harbinger that we will have an early Spring? I tried to take a photo of it, but it was rather blurry because my current camera sort of sucks. What do you think? Is it a bluebird?

Of course, we also get other wildlife visiting our feeders, such as deer. They can drain the feeders in minutes. I tried to put the tray feeder on a higher hook so the deer can’t reach it and the birds have a chance to eat since the birds are actually why we put out the feeders. Every few nights a possum comes by to eat the seeds the birds and deer spill out of the feeders. I have grown rather fond of the possums, especially since I learned that they eat ticks. I despise ticks. I don’t mind who comes to the feeders; I enjoy watching them all.

I’ve been trying to keep walking around the house every day for exercise. I call it my “WalkAbout.” I was walking 18 times around the house each day last week and even made it to 20 one day. I usually walk half the trips in the morning and half in the afternoon after EJ goes to work. However, Friday morning I didn’t walk at all because EJ and I went grocery shopping and I didn’t walk on Saturday. But I did walk three around the house this morning in the early dawn when it was still mostly dark. Not all at once, I rested between each trip with a cup of coffee because It wasn’t easy wading through the deep snow. Each time, when I had huffed and puffed halfway around the house, with the snow reaching above my boots to my knees and the cold stinging my face, I began to doubt the wisdom of my endeavor. I reminded myself that it would be just as much effort to turn back as it was to go forward, so onward I went. But I think that each around the house in deep snow should count the same as six trips around when I had trodden an easier path through the snow. I took these next photos on my third circle around the house this morning.

It probably would be easier to use some exercise equipment in the house during the winter, but we don’t really have any space for any and I don’t want to risk waking EJ by doing aerobic exercises. Besides, I find using exercise equipment or routines to be very boring. All that effort used to go nowhere at all. When I walk outside around the house, I am actually going somewhere, and I get to enjoy the changing beauty of the forest. One time as I walked last week, I watched a Blue Jay’s panicked flight as he tried to escape some sort of hawk that had him in its sights. I was glad that the Blue Jay escaped. I know hawks have to eat too, but I don’t want to watch them kill their prey. I tend to root for the underdog–or under-bird, as the case may be.

Surprisingly, the younger chickens laid a couple of eggs on New Year’s Eve, and I’m finding more and more eggs–sometimes in odd places in the coop. In fact, I didn’t realize they were laying as much as they were until I found piles of eggs, some of them frozen, cracked, and unusable so I throw them in the compost pile. If the chickens keep it up, it won’t be long before I will have enough eggs to begin selling again, although I don’t know how customers will make it up the driveway unless they have four-wheel drive.  In the warmer months, I want to reconfigure the coop and have EJ build more nesting boxes.

Our snowstorm has passed. Earlier this morning the sky was cloudless. Clouds are beginning to drift in, but the sun is still peeking through and the snow glitter. I’ve always been mesmerized by the glitter in the snow that sparkles like crushed diamonds. I think I live in a magical land.