The snow that was dumped on us this week is already beginning to melt as the temperatures warm. There are still several inches of snow on the ground, but it is shrinking a bit and in the driveway it is slushy.

EJ’s birthday is Sunday. Yes, JJ was born a week before his Dad’s birthday. Since JJ didn’t have to go to school or work today, we celebrated EJ’s birthday tonight. He asked for a Pennsylvania Dutch Apple Cake, which is our favorite cake and very yummy. I made it this afternoon.

EJ got out of work early today because there wasn’t much work for him to do. We had to do some banking, so we left for the bank soon after he got home. Afterwards, I was looking at the stores that we were driving past, and I saw a restaurant called Cousin Jenny’s which sold a meat pie called a pasty.

The name Cousin Jenny and the pasty comes from miners from Cornwell, England. When the tin and copper mines failed in Cornwall during the mid-1800s, many Cornish men and women immigrated to the mining frontiers of North America. They were called “Cousin Jacks” and “Cousin Jennies” in the new territories. When Cornish miners migrated to Michigan’s Upper Peninsula, they brought with them their beloved national dish: the pasty. The Finnish miners that followed adopted these meat pies as their own. The pasty is often made of beef, rutabaga, carrots, onions and potatoes. The shape and construct of the pasty made it not only portable, but if it should get cold, it would be relatively easy to warm up. In the mine, this was often done by putting the pasty on a shovel and holding it over a head-lamp candle. In the workplace, a pasty wasn’t eaten with a fork; it was eaten end to end, held upright to keep the juices in.

Pasties are especially popular in Michigan’s Upper Peninsula, but you can find them in Northern Michigan as well. EJ’s mother used to make pasties as he was growing up and he loves them. They are one of his “comfort foods.” It seemed the perfect birthday meal for him, so after I spotted the restaurant, we knew we had to stop in. The owner gave us a choice of having cooked pasties or uncooked ones that we could take home and bake ourselves. Since we had to stop at the grocery store on the way home, and we wanted to take one to JJ, we chose to buy uncooked ones that we could bake at home and eat hot. I told the owner that this was our first visit to her restaurant and that it was EJ’s birthday. She gave him a large free cookie as a gift, which we divided and ate as soon as we got in the Sub.

As soon as we got home, I put the pasties in the oven to bake. Oh, my goodness, they were delicious! I think Cousin Jenny’s will become a favorite restaurant. 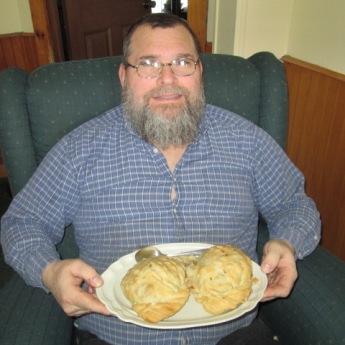 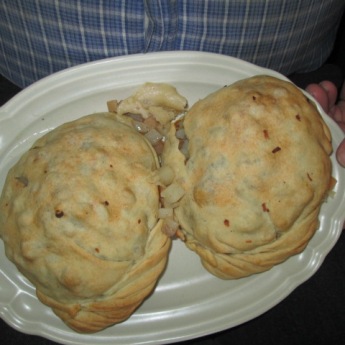 After we ate our pasties, we sang ♫ Happy Birthday ♫ to EJ and then enjoyed his cake and ice cream.

Afterwards, I made homemade bread.