After a fun Saturday watching the Blue Angels perform and seeing Piper, the airport dog, we spent the next two days working around home.

On Sunday I mowed our lawn. We mow only the areas around our house and let the rest of our property grow wild so that we can enjoy the wildflowers that grow and also to provide habitat for the wildlife. Even when the little bit that I mow, it still takes me about 2 1/2 hours with our push mower. I was very hot and tired when I finished. But the lawn looked nice!

EJ and I had considered going to watch the fireworks but with all the tourists up for the holidays, we decided against it. EJ and I sat outside watching the stuff EJ was burning in the burning barrel. We could hear the BOOM BOOM BOOM of the fireworks but we couldn’t see anything because the trees blocked our view. Our neighbors were having some sort of party and setting off fireworks and playing loud music and I thought that the holidays aren’t very enjoyable to me anymore. I prefer quiet. Besides, JJ worked late over the holiday weekend and he came home each night with stories about crazy crowds acting stupid. There were a lot of drunks and he said one person drove away with the gas nozzle still in his car…and stuff like that.

People selling fireworks set up their tent in the store parking lot and JJ came home with a lot of fireworks, but it’s so dry up here that we told him that it would be better not to set them off until we get more rain so that he doesn’t set the forest on fire. He did set off a couple–and they really are cool–but he agreed to postpone most of them.

EJ and I spent all day Sunday working in his garage, trying to get things organized. We made a lot of progress. For the most part, EJ will now just need to put things away in the cabinets, toolboxes, and drawers. I laughed because we moved a file cabinet next to the chicken cage in the garage and a little later I saw Peeper, Cuddles, and a few of the chickens examining it and discussing what on earth it could be.

EJ and I both were really tired today. I was able to take it a little easy today, sort of, but poor EJ had to go back to work.

Every now and then a meme will start appearing on my Facebook timeline. Well, there are always memes appearing on my timeline–some I think are true, some are cute, and some are funny. But now and then there are ones that I hate because their messages are so clueless or guilty or ignorant. Usually the first dozen times or so that such a meme appears, I just hide it. But if it keeps popping up, I find myself reaching a point where I end up writing about it. There is such a meme that’s been popping up that has caused me to reach that point. Here it is: 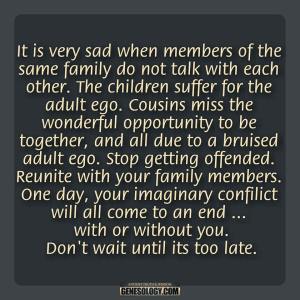 The reason I dislike this meme is that it assumes that every family conflict is due to “bruised adult ego” and “imaginary conflicts.”  While that might be true in some cases, it’s not true in many cases, which this meme doesn’t mention.

The truth is that there are many, many people who go “No Contact” with family not because of “bruised egos” and “imaginary conflicts” but because of damaging abuse. It is not easy to decide to have no contact with a relative and victims do not make the decision lightly. It usually happens only after a victim has spent years forgiving intentionally “offensive” behavior and trying to fix the relationship and it often involves a lot of guilt, pain, heartbreak, and anguish.

So let me tell you that while “it’s sad when members of the same family do not talk to each other,” what is even more sad is when a person remains in an abusive situation and/or is pressured to have contact with a relative who is physically, sexually, verbally, or emotionally abusive. Abuse is not imaginary and remaining in contact with an abusive relative does more harm to the victims–including the children–than leaving does. Maybe “cousins would miss the wonderful opportunity to be together” but it’s more important that victims are protected from abusive relatives. Abuse escalates over time and a victim needs to “not wait until it’s too late” to escape.

Whenever a victim is brutally beaten or murdered, people often ask, “Well, why did she stay? Why didn’t she leave?” I often wonder how many victims wanted to leave, tried to leave, but people told them how sad it is when family members don’t talk to each other because of “bruised egos” and “imaginary conflicts.” Not every family is good and not every relative is worth “re-uniting with.” Please stop sharing such guilt-dripping memes that make clueless–and often dangerous–assumptions.

5 Comments on “The Weekend”